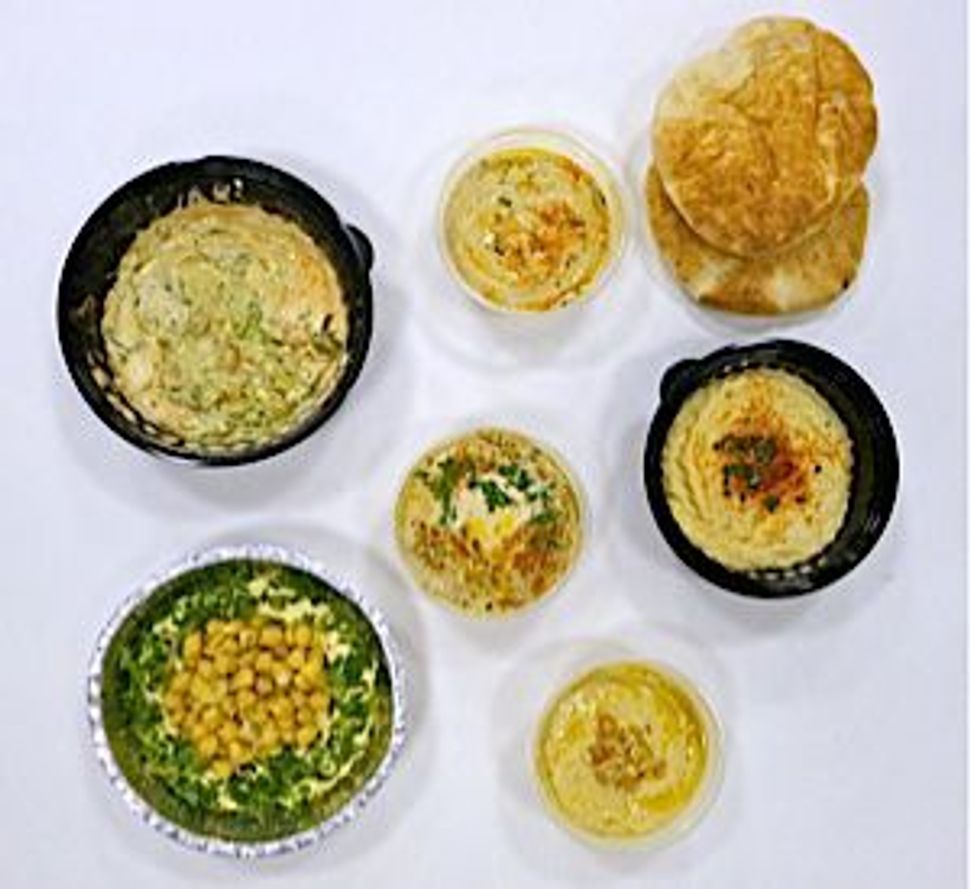 After a week of packaged hummus, the Forward’s taste testing team was particularly excited for this day of hummus week: freshly-made hummus from some of New York’s top Israeli spots. Eager looks and impatient sighs of “Are you ready yet?” attested to the anticipation and eagerness that permeated the office on the morning of testing.

Since comparing hummus from different traditions is like comparing apples and oranges, we stuck with what we know, Israeli hummus. With some help from hummus aficionados, we narrowed the field down to six finalists — all made in New York City proper and all in the Israeli style.

The six hummuses we tried are part of an elite category — creamy, but not too thick. Each is packed with flavor — lemony, garlicky, creamy, and full of tahini. No chemical aftertaste. No confusing superficial freshness, no weird hidden hits of jalapeno or vague un-named spices.

To keep it fair, we did a blind taste test and only sampled with the city’s top pita — made by Pita Express — which is thick, fluffy and utterly irresistible.

These are the hummuses of our dreams. And as one editor commented “I could eat this all day.”

Balaboosta, from the same owner as Taim, ranked much lower than had been predicted. Though many of us often eat from the Taim falafel truck, and thoroughly enjoy the way the hummus slops against the pita walls and burrows into the crevices of deep fried falafel, somehow on its own, it didn’t measure up. It tasted a little watery, with a tad too much oil, lots of cumin, and not enough tahini. While still a good hummus, Balaboosta failed to wow us. $6 for 7 oz. 214 Mulberry Street, New York; (212) 966-7366

I’ve got to say, Hummus Kitchen serves up one beautifully presented hummus. Warm chickpeas and parsley sit merrily under a generous sprinkling of cumin. The hummus though, was a bit of a disappointment. The texture was a bit watery and the taste had a slight tang that left us wanting more. This felt the least home-made out of the bunch, and the amount of chickpeas scattered across the top felt distracting, rather than enriching. $4.50 for 8 oz. 789 9th Ave, New York; (212) 333-3009

This hummus probably stirred the most controversy. One tester recoiled in disgust at the smell and wrote a simple “yuck” on her score card. She gave it a 1 out of 10. I, on the other hand, found this hummus to be my absolute favorite. It was herby, creamy, smooth, and tasty — with just the right amount of olive oil (aka a lot) but with enough herbs and chickpeas to keep the texture creamy and formed. One tester declared that he could eat it all day long. Upon tasting a dab, another made an “aha!” noise while extending his forefinger, proclaiming that, with this hummus, “the difference is manifest!” $5 for a regular order of hummus. 101 Saint Marks Place, New York; (212) 677- 2226

I have to say, we were disappointed. Though an objectively good-tasting hummus, Hummus Place failed to really wow any of our testers — despite the spot’s typical hype. With a basic creamy texture (bearing on the mayonnaise side), and full flavor, Hummus Place plays it safe, and was able to round up a consistent record of middle-grade scores, putting it in third place. There is no denying that it tastes and feels like good hummus, but it was missing that transcendent kick that we were looking for. $4.30 for a small order of hummus. 109 St. Marks Place, New York; (212) 529- 9198

Translating roughly to “the real thing” in Hebrew slang, Asli’s hummus is thick, and heavily laden with tahini. This is the hummus for the tahini lovers of the world. So thick it could almost be halva, and textured like whipped cream cheese, Hoomos Asli was described joyfully as “tahinarrific” by one tester. Hoomoos Asli’s spot in SoHo resembles a lively Tel Aviv beach shack, and its distinctive hummus stood out for its sweet, thick, creaminess. $5.17 for 8 oz. 100 Kenmare St., New York; (212) 966- 0022

For those that don’t live in the depths of Brooklyn, Mimi’s will probably be a bit of a schlep. Yet, nestled in Ditmis Park, Mimi’s Hummus sits like a queen. Its goods are flavorful and herby — presented beautifully with sprinkled parsley and warm cooked chickpeas. The hummus is light and mouth-watering, with a lemony kick that makes way for the subtle hints of tahini and olive oil. The near-perfect smoothness that Mimi’s has achieved was described by one taster as “smooth and sensual.” It was almost clear from the very first dab that Mimi’s would be the one ruling the pack. $8.00 for one size. 1209 Cortelyou Rd., Brooklyn; (718) 284-4444