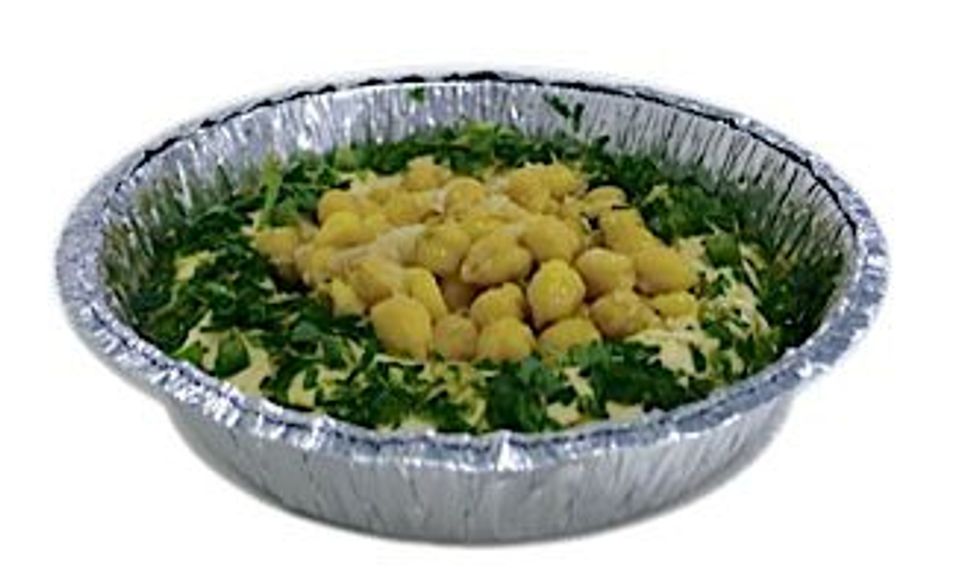 And it’s not just the Forward staff that’s obsessed with the restaurant’s namesake dish. The cozy 8-table restaurant has garnered great praise for its takes on favorites like shakshuka, lamb meatballs, and tabouli, but it’s the house specialty that’s the main draw — and for good reason.

In addition the classic-style, piled with chickpeas and generously sprinkled with herbs, Israeli chef Mimi Kitani draws on her Iraqi and Moroccan background to spin out flavorful hummus garnished with mushrooms, extra tahini, and spiced meat and pine nuts.

The Jew and the Carrot talked to Kitani about her cooking, how her restaurant started, and how she really feels about supermarket hummus.

What’s the story behind your hummus? Is it a family recipe? When did you start making it?

It’s not from my family. I’ve lived here eight years, and we kept wanting to eat hummus and every time we went out to eat it, we were disappointed. It’s something I made for friends at home…I started [making it] like five years ago… Every time [I made it] people told me I should do something with it.

What are the characteristics of a perfect Israeli hummus? How’s it different from other hummus in the Middle East?

There’s so many in Israel — depends upon who’s making it and how they like it. I like it clean — not too many spices. I love lemon and garlic as a garnish. There’s not such a thing as a perfect hummus — it’s whatever you like you.

To be honest, since I can’t go to Syria, I’ve only tried Palestinian [hummus] — theirs is a bit more thick. They ground it traditionally and have more chunks of chickpeas in it; it’s less creamy. They use more garlic, but still, it really depends which hummus you’re having.

What do you think of American Hummus?

They’re [mostly Israeli] Even the ones you buy in the grocery store, it’s Sabra…. [But,] the people that only know hummus from the supermarket — they don’t know what hummus is. It tastes so different from real, fresh hummus. I really don’t like it. But it’s a personal taste.

A spokesperson at Sabra told us they think hummus is the next mayonnaise. What do you think of that?

Have you tried some of the wacky flavors on the shelf like buffalo-style hummus and edamame hummus?

No…. [But,] there’s space for anything that tastes good, I’m not sure it’s hummus… it’s spread! Hummus is chickpeas and tahini.

There are the hummus people and the falafel people. I’m pretty sure hummus was always a big deal. Before [you’d have to] go to Arab cities for hummus, now you can eat it in every corner of Tel Aviv. You don’t have to go to Jaffa to eat it. Hummus was always big in Israel — always part of daily menu.

Just as it is at Mimi’s. What’s the story behind Mimi’s as a restaurant?

We love the food, friends like the food. We thought it would be fun to share with other people, [in a] friendly small neighborhood. We wanted to show people a different point of view about Israeli food — it’s not just shwarma or falafel!