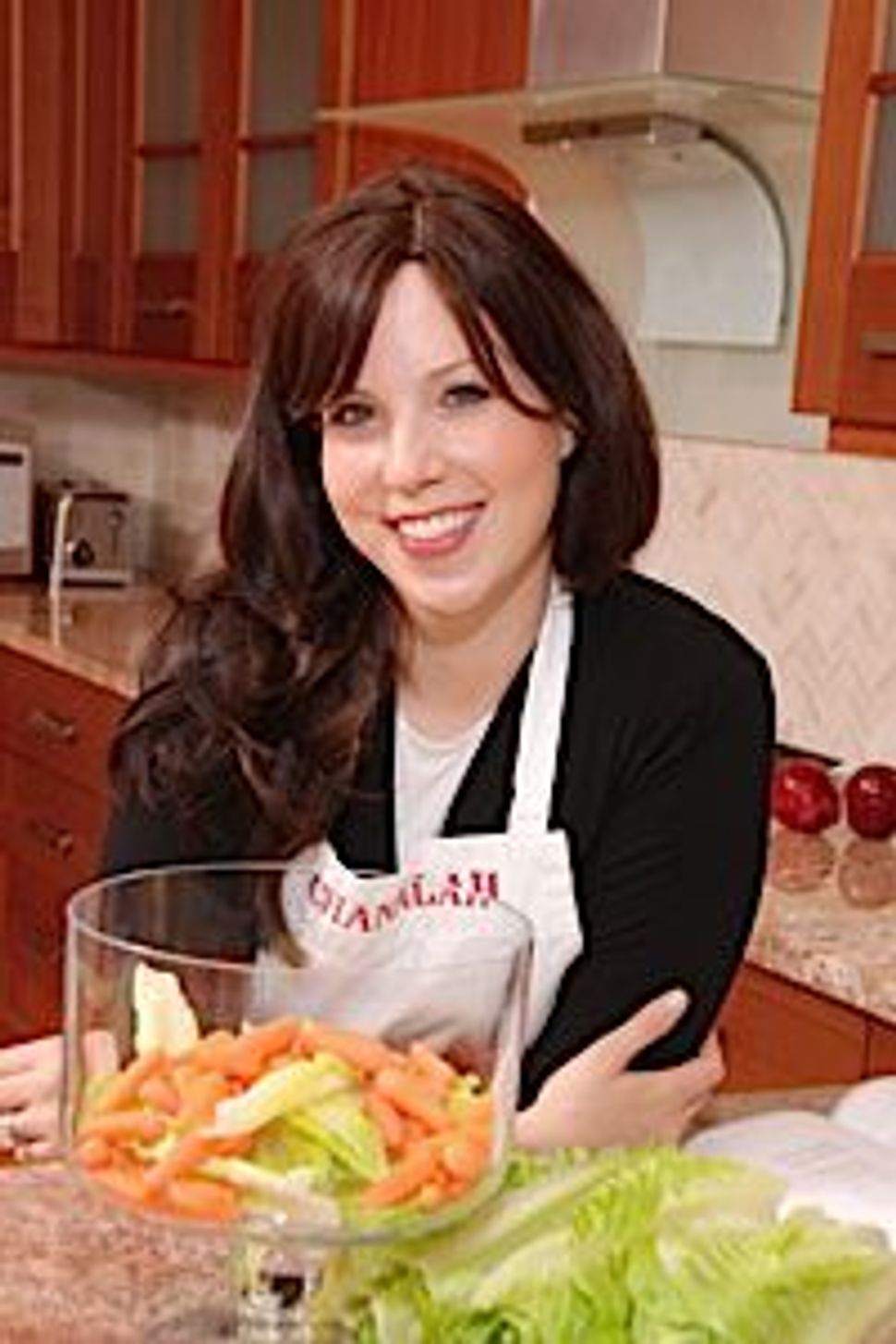 Image by Courtesy of Joy of Kosher

Jamie Geller is often called the “Kosher Rachael Ray.” But she wasn’t always a domestic goddess — or even kosher! After a successful career as a journalist and television producer, Geller got married and realized that she was “a disaster on wheels in the kitchen,” as she says.

Since learning her way around a stove, she’s brought her hard-earned personal and culinary lessons to the masses through a mini culinary empire with kosher cookbooks, web cooking shows, a magazine, and the popular Joy of Kosher website.

This week Geller and her family are picking up their family and leaving behind everything they know to move to Israel, all while documenting it in a reality mini-series called the Joy of Aliyah. I caught up with Geller before she made the move to talk about how she went from zero to hero in the kitchen, what she thinks of Israeli food and what lies ahead.

Katherine Martinelli: Tell me a little bit about your background.

Jamie Geller: Basically when I grew up my mother had a dream for me to be the first Jewish woman president of the United States…. My mother was not the typical homemaker and actually considered building a house without a kitchen and built it off to the side so she would never have to walk through it if she didn’t want to.

How did you get started in the food world?

When I got married my husband was like “what’s for dinner?” …I was a disaster on wheels in the kitchen. I had gotten all of these kitchen contraptions for our wedding, like a food processor with a video of how to use it. So I slowly tried to look at the contraptions I got, I followed the recipes from the cookbooks that were given to me. But everything assumed a certain level of knowledge, and I didn’t have the knowledge in the kitchen. I started making these 911 calls to people in my husband’s family who are all amazing cooks, and they came over and cooked with me. And whatever they thought was easy I made them easier and easier. And it tasted good!

How did the Joy of Kosher come about?

We started the JoyofKosher.com in 2011…The recipes I do are quick and simple and easy….I open up very candidly about my life and my life in the kitchen [on the site], but its really a place to showcase all the talents in the Jewish kosher food world. We wanted to create the single ultimate destination for the Jewish cook or the kosher curious. People are members and upload their recipes, and we have like 15 different blogs on the site from crafting to restaurant chef secrets to health columns.

People have really responded to it. There were no quick simple cookbooks in the kosher market when I launched. People wanted to outdo each other. Of course now simple, easy cookbooks are everywhere, but then they were not that common.

What prompted your family’s move to Israel?

I’ve been there many times and even when I was a junior in high school I studied abroad in Israel. I remember I called my mother from a pay phone and I was talking to her and I said “I want to live here…this is home.” In the end I always say you have these intense feelings and burning desire and an idea but then you come back and that gets dimmed and you get busy in my life….When I met my husband it was his dream. He’s been working on me and he reignited that passion and it’s now going to become a reality for the both of us.

What impact do you think the move will have on your work?

I hope positively. I had no clue until I made the announcement how many people are on our site and follow us from Israel…. I think [being in Israel] will even make the cooking show more interesting [since I’ll get to] showcase the markets and produce and restaurants and cuisine and celebrity chefs there.

I’ve been trying to make Israeli food for a while but I’m excited to learn it authentically. I’m looking forward to the challenge. Because I cook quick, simple and easy it’s very important that everything I make is accessible and easy. The goal is to be able to make them no matter where you are, so that probably will be a big effort on my part and bit of a change.

Are there any foods or ingredients you’ll miss in Israel? Any new ones you’re excited to get there?

I don’t know what I’ll miss because I don’t know what I’ll have…I like that [Israeli] food itself is so much riper and more flavorful. It’s healthier cooking. It’s farm to table, and I’m not talking in the trendy sense, I mean there’s literally less time from the farm to your plate, it’s that much fresher.

What do you think about the food scene in Israel today?

I feel very excited to explore more and learn more about it. I think every year more restaurants are popping up, and I was excited to learn that Master Chef Israel is as popular as sporting events. I love that the food scene there is relevant and doing things that are cutting edge, I’m looking forward to that and I’m just looking forward to learning.

I think that Jewish food is the original fusion cuisine because we’ve been scattered throughout the four corners of the earth and the diaspora and we’ve really melded them with the flavors of our host country. Israel is the ultimate melting pot for the Jewish people, you have every type of Jewish person there from north African to Russian, whatever, so I feel like it’s incredible to see what that brings and be exposed in the most authentic way.

In addition to your mini documentary, “The Joy of Aliyah,” what else are you working on?

I’m also working on a PBS show for Hanukkah which we’ve already filmed, but the Passover show I’d like to shoot in Israel. I want to make a travel culture and food show based in Israel. We’re moving the whole production arm of our company over there. We’re bringing business and production to Israel and I’m really proud and excited of that move as well. It’s on so many different levels – personal and professional – that this means so much to me.