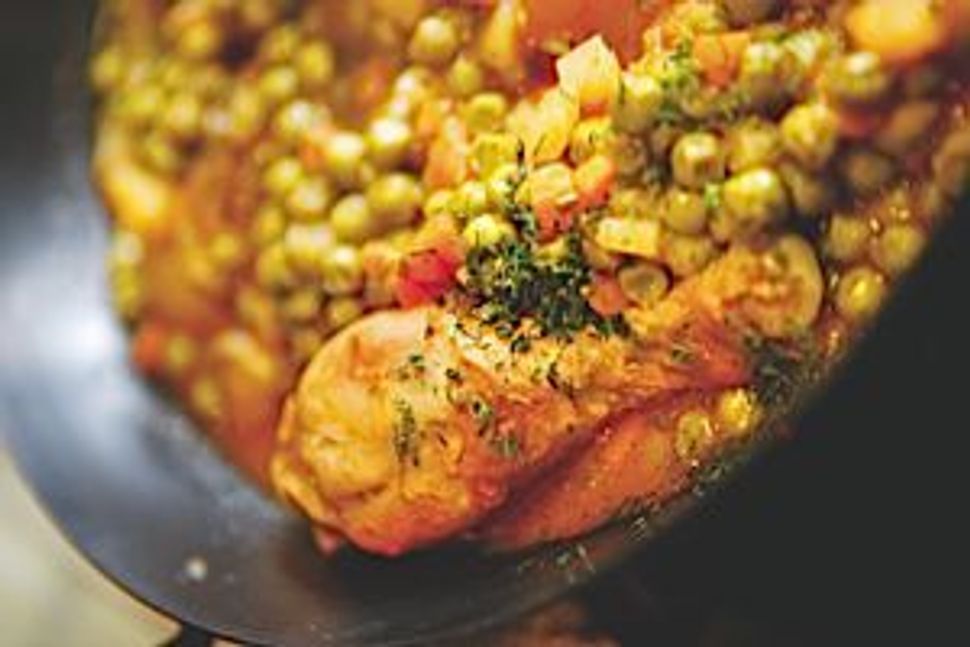 When my husband and I went on vacation to Rhodes, Greece last fall, we knew that we would walk amongst history and be in for some memorable meals. But we knew nothing of the Jews of Rhodes, and couldn’t predict the impact that learning their tragic story would have on us.

Walking through the only remaining Jewish house of worship on the island Kahal Shalom Synagogue, which dates to 1577 and visiting the adjacent Jewish Museum, our holiday to Rhodes suddenly had more meaning, and became much more than a typical beach vacation.

While our trip was rich with experience, it lacked the flavors of the island’s unique Jewish cuisine, which is the topic of the newly released cookbook, “Stella’s Sephardic Table: Jewish Family Recipes from the Mediterranean Island of Rhodes”. Part memoir, part history of the Jews of Rhodes, and part cookbook, “Stella’s Sephardic Table” is a beautiful tribute to Cohen’s ancestral home.

Although she grew up in Zimbabwe, Cohen always felt a strong connection to Rhodes through her mother’s cooking, the stories of her great grandfather Yaacov Capouva (a respected sage and rabbi of Rhodes), and annual trips to the Greek island.

Much like Turkish Jews the Jews of Rhodes came to the region after their expulsion from Spain in 1492. Although today only a handful of Jewish people remain on the island, for centuries Jews were valued members of Rhodes society, and the island was even nicknamed La Chica Yerushalayim, or “The Little Jerusalem” in Ladino.

Like many other Jews at the time, Cohen’s Rhodesli parents immigrated to the Belgian Congo in the 1930s to escape increasing oppression from the Ottoman Empire and economic restrictions against Jews. Although her father hoped to earn enough money to be able to send for his mother and other family members, he would never see them again. On July 23, 1944, all 1,600 Jewish residents of Rhodes were sent to Nazi concentration camps in Poland. A mere 150 survived.

Cohen’s inspiration for writing the cookbook was a desire to commit her family recipes, many of which had been passed down orally, to paper. Her trips to the States to visit her children and grandchildren are always met with requests for these recipes. “The food rekindled not only their childhood memories,” explained Cohen in an email, “but also reinforced an appreciation of their heritage. They urged me to document and update our Rhodesli family recipes more fully and to add our customs that are vanishing.” Her husband Victor encouraged her further, and she has been working on the cookbook for the past 10 years.

The coffee table-sized book is clearly a labor of love, with over 250 recipes, gorgeous color photos, clear instructions, a glossary of ingredients and terms, and even a section featuring Cohen’s paintings. “This book,” Cohen explains in the introduction, “is a collection of my most-loved traditional Sephardic everyday food and festive dishes from Rhodes, together with a handful of recipes that evolved within our communities in Southern Africa and my travels in Morocco.”

Cohen offers inspiration for everyday cooking as well as holidays. There’s an extensive section on the mezes the region is so famous for, including salads, stuffed pastries, pickled vegetables, and more. “Sephardic mezes not only comprise an enticing array of appetizers in the form of small dishes and finger foods, but also describe a way of eating, living and socializing,” Cohen explains. She offers a flavor-packed recipe for black-eyed bean salad, which can be a side or a meze and is eaten by Rhodesli and Egyptian Jews on Shabbat and Rosh Hashanah, “representing new life and abundance.”

The recipes in “Stella’s Sephardic Table” tell the story of the Diaspora and the myriad influences on the food of Sephardic Jews, incorporating aspects of Spanish, Ottoman Turkish, Greek, and in this case even African cuisines. From Turkish kebabs to African piri-piri, and from Greek meatballs to Spanish fried rice pilaf, Cohen paints a picture of her heritage and the beautiful flavors that have resulted.

Reprinted with permission by the author from “Stella’s Sephardic Table: Jewish Family Recipes from the Mediterranean Island of Rhodes”.

This stew is remarkably flavorful, despite such simple ingredients. I recently discovered in Rhodes a wonderful variation to this stew with artichokes, which enhances the overall taste and texture. I encourage you to try it both ways.

1) Rinse the chicken portions, trim off the excess fat and pat dry.

2) Heat the oil in a large, shallow, heavy-based pan over a medium-high heat. Add the chicken pieces and cook in batches on all sides until golden brown. Lift out the meat and keep in a heatproof dish.

3) Add the onion to the pan and cook for 3 minutes, stirring frequently, until softened. Return the chicken to the pan, skin side up. Stir in the tomatoes. Pour in enough hot stock or water to come midway up the chicken. Bring to a boil. Cover, reduce the heat and simmer for 15 minutes.

4) Add the peas, carrot, potato, dill, sugar and salt. Cover and simmer for a further 15 minutes or until the vegetables are tender and the chicken is cooked. Taste and adjust the seasoning. If the tomato sauce is too watery, increase the heat and boil, uncovered, until slightly reduced.

10oz packets of frozen green peas can be substituted for the fresh peas. They will only require cooking for 4–5 minutes.

If using artichokes, simply add 2 cups canned and drained or frozen artichoke hearts, cut in half lengthways, to the vegetables.