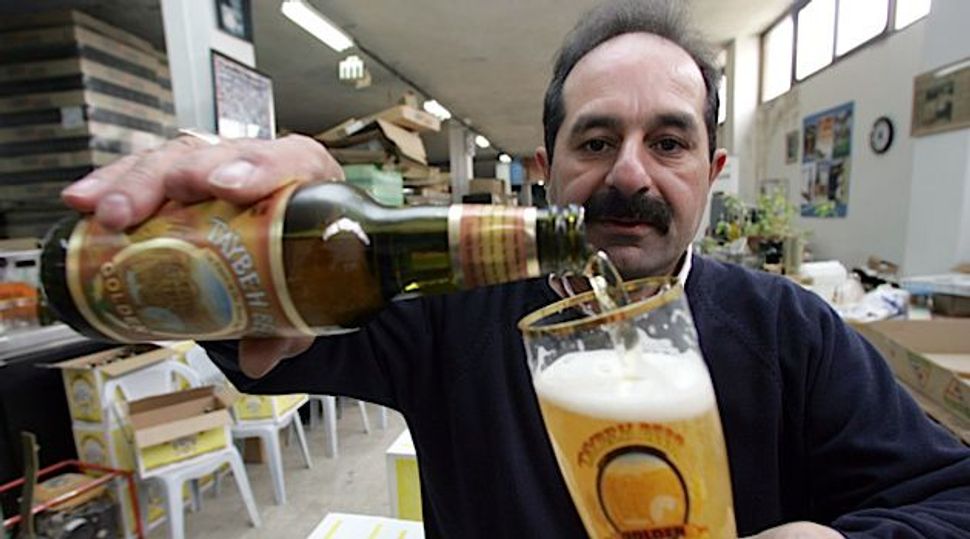 Cold One: Nadim Khoury, a Palestinian brewer who learned the trade in the United States, helped shape the microbrew industry and flavor in Israel. Image by Courtesy of Taybeh Brewing Company

Beer is almost as old as recorded history. The ancient Egyptians drank it, as did the Mesopotamians. Hammurabi’s code even regulated how it was made and where it was consumed. And though wine was the drink of choice of the ancient Israelites, modern Israelis have increasingly quenched their thirst with beer.

The modern history of beer in the Holy Land has been dominated by two industrial brands: Goldstar and Maccabee, brewed from 1950 and 1968 respectively. Tuborg and Carlsberg, which are brewed domestically, joined the scene in 1992. These are all light, easy-drinking beers — the stuff zayde might drink on a hot day.

But the beer story in Israel is changing.

International brands have proliferated on makolet (corner grocery) shelves and from barroom taps since the mid-1990s. And, more recently, Israeli craft brewers have begun offering a range of small-batch, artisanal beers. Israelis have developed a taste for the seasonal varieties and experimental flavors characteristic of craft beers, which they first encountered abroad. “People are now looking for better bread, better cheese, better chocolate, and the same thing is happening with beer,” said Ori Sagy, the founder of Alexander Brewery in Northern Israel. “We’re part of a small revolution.” Sagy, a retired fighter pilot, is characteristic of Israel’s new breed of craft brewers: He’s passionate about beer and found the offerings in the Israeli market wanting.

The local brewing scene’s trailblazer is considered by most to be Dancing Camel of Tel Aviv, which opened in 2006. While many Israelis love the deep, hoppy taste of their homegrown brews, what they often don’t know is that the origins of these craft beers lie in an American brewing tradition that was first brought to the region by a Palestinian brewer.

More than a decade before Dancing Camel opened, Nadim Khoury, an affable, middle-aged Palestinian Christian, opened Taybeh brewery on the outskirts of Ramallah. Taybeh was certified kosher and marketed to Israelis. But, with the onset of the second intifada, Taybeh lost its kosher certification and is now hard to find in Israel. However, its influence lives on. Israeli microbrews have followed Taybeh’s hoppy taste, which itself is strongly reminiscent of American craft brews such as Sam Adams and Sierra Nevada, the beers favored and emulated by Khoury.

For Khoury, brewing started as a dorm-room hobby at Boston College in the 1980s, and was carried home in a suitcase. “I would bring one or two home-brew kits and make beer for my family,” he said. “They were surprised that I was making good beer.” Khoury’s family encouraged him to study brewing back in the United States.

After Khoury moved back to the Middle East and set up his brewery, Taybeh sold its first batch at the height of the Israeli-Palestinian peace process in 1995. The beer proved extremely popular among Israelis. “When we opened we were selling 70% to Israel,” said Khoury. “There was no checkpoint; there was no wall. It was easy to get in.”

Then came the second intifada, and with it declining sales. Taybeh lost its kashrut certification, and today Khouri says he sells only 30% of his output to the Israeli market. Taybeh is now largely limited to the periphery, bars described by Israeli brewmaster Itzik Shapiro, of Shapiro Beer in Beit Shemesh, as “places where artists, leftists and hipsters hang out.”

Shapiro and his many siblings — all involved in the eponymous brewery — are relatively new to the Israeli craft brew scene; they celebrated their first anniversary on August 16. But the path they took is a familiar one: They fell in love with American craft brews and decided to bring them home to Israel.

“Our oldest brother was living in Milwaukee about 15 years ago and used to come back and complain that we don’t have any good beer here,” said Shapiro. “He brought a brew-your-own beer kit and we started just for fun.” Shapiro later spent four months stateside, picking up the trade from local craft brewers: “I went to Colorado to see what things looked like outside my parents’ bathtub.”

Sagy, of Alexander Brewery, was looking to start a business of his own when he retired from the Israeli Air Force and decided to build on his love of beer. “I was making beer at home, and the beer that I wanted to start with were the beers I love myself,” he explained. “I really like the craft brews of America, and I’ve been influenced because I like the taste.”

Much like Taybeh, many Israeli craft beers have flavors that are unmistakably American. The beers are extremely bitter and hoppy, often finishing with an almost skunky flavor. “The Germans make really good lagers but they’re a little bit boring, and same with the British,” said Shapiro. “We are trying to make some different.”

Harley Zipori, who blogs about beer for the website IsraelSeen.com, says that the Israeli craft brewing industry has been influenced by more than just the taste of American beers. “There’s [also] the influence of the industry, which started from nothing in a culture which barely knew anything about beer and got to where they are today,” explained Zipori. “That gave them a model in terms of emulating craft breweries and going out and marketing it.”

While Israeli craft brewers are quick to pay homage to their American roots, not all are so quick to concede that Taybeh was truly the first of this kind in Israel. “We were the first craft beer in the whole Middle East,” said Khoury, “and now there are over 20 microbrews in Israel. They followed in my footsteps.” Zipori acknowledges that Taybeh was indeed the first craft brewery in the area. “But it’s the Middle East,” he said. “It’s not so easy to cross either the borders or the cultural divides.”

Despite these barriers, many of those in the forefront of the Israeli craft-brewing movement have visited Khoury’s brewery to learn from him. Shapiro overcame his reluctance to visit the occupied territories in order to visit Khoury’s brewery. He walked away with both enhanced respect for Khoury’s operations and a plan for a joint Israeli-Palestinian beer. “It would be good for me and good for him,” Shapiro opined.

When asked about Shapiro’s idea, Khoury equivocated. “I don’t know if my people are ready for a joint beer,” he said. But despite the persistent gulfs between Israelis and Palestinians, Khoury is happy to help: “I don’t mind sharing my knowledge because I was helped and supported by many home brewers. I want to give [Israelis] the education and support that I had.”

Nevertheless, Shapiro is optimistic: “Everyone loves beer. I believe beer will bring the peace.”

Jamie Levin is a PhD candidate in Political Science at the University of Toronto. He has contributed to Haaretz, the Jerusalem Post and the National Post.