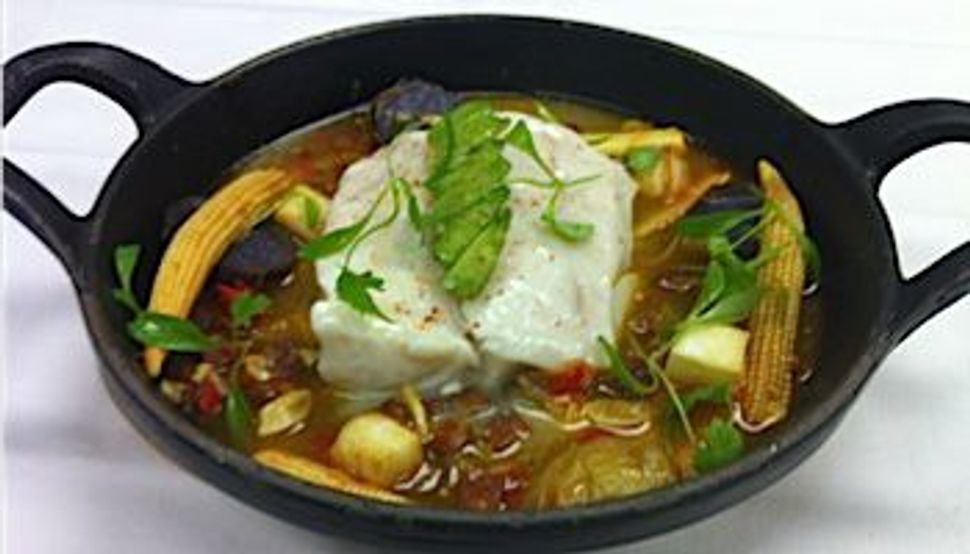 Eric Ripert is the reigning king of seafaring foods in the United States and his Philadelphia restaurant 10Arts reflects his passion for poisson. The restaurant, located in the Ritz Carlton, is led day-to-day by chef Nathan Volz,.

Volz says he strives to craft dishes that “look hearty but are actually very light and packed full of flavor.” One of his signature dishes is a piece of stripped bass, swimming in a chorizo broth. His striped bass preparation was inspired by one served at Eric Ripert’s most famous restaurant Le Bernardin where “they use a variation on the sauce for one of the dishes and I fell in love with the bass and made it more rustic by leaving in the vegetables and the chorizo…The bass is always something customers come in for. It’s definitely a favorite.”

Although it’s an complex and sophisticated dish it works just as well in the home kitchen “because the hardest part about the dish is the sauce and that can be done earlier in the day or the day ahead. It’s something that could be finished last minute.” Still, there are a few more steps than your average three step meal.

So, how did we kosherize a dish that derives its flavor from pork sausage? Well, chorizo gets its unique flavor from its pimenton (a Spanish smoked paprika). Separating the meat and pimenton would help us get both the meatiness and the proper smoke bite. Where to find kosher pimenton? That we’re not sure of but the Hungarian smoked paprika commonly used in dishes like chicken paprikash is almost as good and far more accessible. Turkey or chicken sausage won’t work here but one made of lamb or beef should do fine. If you can find kosher merguez (a Moroccan lamb link) you are golden for this interpretation. (Neshama Gourmet Kosher Food makes a beef and lamb mixed link that will work here.)

Chef Volz suggests making the sauce on Friday and throwing this together on Sunday when “you want the whole family around and something that’s really satisfying.” Pair it with rice and make it a new Shabbat tradition. Lay out fancy napkins and your best silver and you’ll feel as if you’re dining at the hands of well-trained chefs.

For yucca: Heat 1 inch oil (peanut or vegetable) in a medium skillet over medium-low heat. When oil shimmers, add yucca. Turn occasionally to fry. Can be done in batches. Drain on a paper towel.

For sauce: Set a small pot over medium heat and slowly render the merguez. When the sausage has started to release its oils and aroma add the vegetables, smoked paprika and season with salt and fresh ground black pepper. Once they have sweat out (10-15 minutes), add the chicken stock and bring to a simmer. Cook for about 10-15 minutes over low heat to allow the flavors to develop. Leave to the side

Dust fish with flour, salt and ground white pepper. Add canola oil to a cast iron skillet. Sear on each side until medium rare, about 5-7 minutes per side. When the bass is almost ready, return the sauce to the stove and add the potatoes and corn and bring to a simmer. Check the broth for seasoning and finish with some freshly squeezed lime juice. Nicely arrange the vegetables around the plate, leaving room in the middle for the fish, and then pour the broth in the bowl. If there’s extra broth reserve it for another use. Gently place the bass in the dish and top with the sliced avocado. Randomly arrange the cilantro around the dish and on the avocado. Enjoy!

Editor’s Note: It is the custom of some Jewish homes to not eat meat and fish on the same plate. If you observe this custom, we recommend trying last week’s Kosherize This recipe instead. You can read it here.