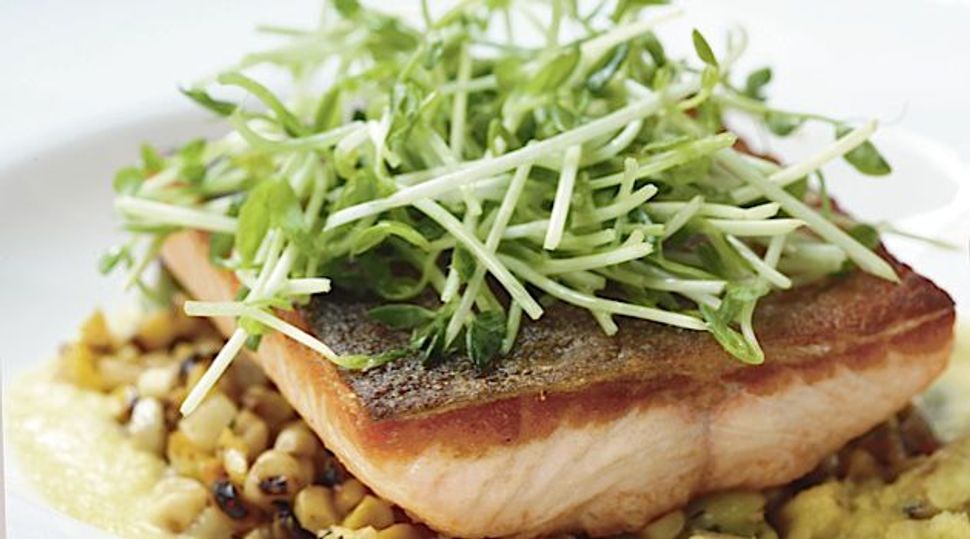 Elegant Fare: A perfectly seared piece of Arctic char sits atop corn and fava beans in a dish that?s far from expected at a kosher restaurant. Image by Melissa Horn

From the street, Jezebel does little to announce itself. Save for a menu in the window, there’s absolutely no indication that there’s a new restaurant on this stretch of West Broadway in lower Manhattan, let alone an upscale kosher one. But on the other side of its door, yarmulkes abound among the plush furnishings, and choruses of “l’chaim” can be heard above the piped-in pop music. The probability of finding an impressively bearded rebbe sitting in the downstairs lounge, being served by a waitress wearing a pink cocktail dress, is above average. The intimate, dimly lit bi-level townhouse is decorated with an eye toward humor and the Tribe: One print renders Mark Zuckerberg as Ben Franklin; another depicts Woody Allen as Jesus partaking in the Last Supper.

But like most other restaurants in the neighborhood, Jezebel is first and foremost about being in SoHo: Everything, from the staggeringly beautiful 6’2” hostess to the sky-high prices, serves to remind you that you’re at a discerning, high-end establishment where appearances matter and luxury is common currency. The service is attentive almost to a fault: During the course of your meal you will likely be asked every six and a half minutes if everything is fine.

And usually everything is fine, because the food (from the James Beard Award-winning chef Bradford Thompson) is pretty much unlike anything you’ll find served in a kosher restaurant, at least outside of Israel. Though the intercontinental menu is predictably meat-centric, it doesn’t shy away from vegetables, which it treats with delicacy and kindness. An unfussy salad of arugula, pickled and roasted beets and horseradish is nuanced and beautifully balanced, while the corn and fava beans sheltering beneath an unbelievably succulent, generously portioned piece of Arctic char boast equal parts tenderness and bite. Even dessert, in the form of a semi-frozen peanut butter bar, is entirely respectable, thanks to an unholy union of chocolate, peanut mousse and just enough salt to keep everything on its toes.

Judged on these merits, Jezebel has succeeded in its mission to be, as its co-owner Henry Stimler says, “a fun, hip kosher dining environment” — a concept he describes as “the last bastion of luxury for the kosher observant community.” Most, if not all, kosher restaurants are built “for and with a kosher observant audience in mind,” Stimler adds. “We did the exact opposite.” When he and co-owner Menachem Senderowicz conceived of the restaurant, “we asked ourselves, would Madonna, Mayor Bloomberg, Lenny Kravitz and Amar’e Stoudemire enjoy having dinner here?”

The unspoken issue inherent in that question, of course, is whether Jezebel’s appeal will be limited to those looking for a definitively, not coincidentally, kosher restaurant. And that in turn poses a larger matter to consider: will the restaurant, in its efforts to give kosher dining a sexy revamp, remain an anomaly or will it succeed in helping to spawn more “coincidentally kosher” restaurants that advance the cause of the cuisine?

Certainly, Jezebel is far from the being one of a kind. This fall, Michael Solomonov, the chef and owner of the celebrated Philadelphia restaurant Zahav, will venture into the kosher world with a European-style restaurant, Citron and Rose. These restaurants are following in the footsteps of many before. To this day, New Yorkers have fond memories of Levana, the Upper West Side restaurant that introduced the concept of sophisticated gourmet kosher food to the city more than 30 years ago. Since then, restaurants like Pardes, in Brooklyn; Solo, in Manhattan; Herzog Wine Cellars, in Oxnard, Calif.; La Seine and Prime Grill, in Los Angeles, and the Kitchen Table, in Northern California, have opened and, in the cases of the Kitchen Table and Prime Grill, closed, spreading the gourmet kosher gospel to (mostly) urban areas around the country.

Their existence, says Sue Fishkoff, is thanks in part to baalei teshuva chefs and diners — those raised in observant households who left and later returned to religious life or those who were secular and later became religious. “The clientele is younger and mixed because people, especially younger Jews, move in and out of observance,” explains Fishkoff, the author of “Kosher Nation: Why More and More of America’s Food Answers to a Higher Authority.” “There’s a great chance some friends will keep kosher and some won’t. And people know great food.” 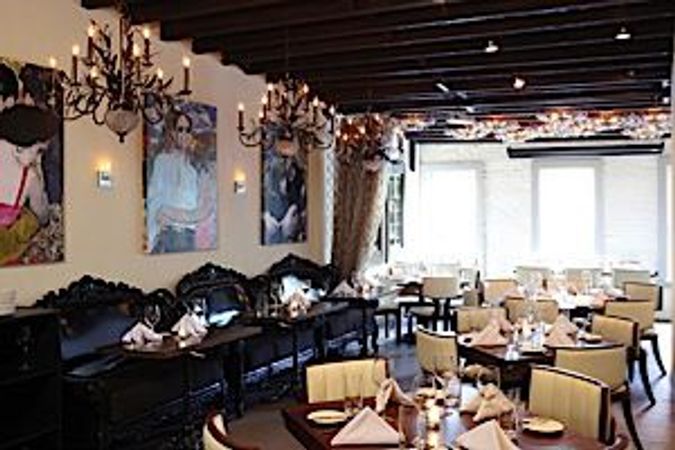 Behind Closed Doors: The decor at Jezebel balances a hip elegance with humor. Woody Allen poses as Jesus in a rendition of the last supper. Image by Melissa Horn

Itta Werdiger Roth, a professional chef and the founder of the Hester, an underground kosher supper club in New York, echoes Fishkoff’s sentiment. “The same way that the foodie revolution has been taking over America for the last bunch of years, the kosher community, which is often a few steps behind, is experiencing a hunger for new takes on food and cooking,” says Werdiger Roth, who, as a Hasidic Jew, has patronized her fair share of kosher restaurants.

But while self-identified foodies can now be found nibbling around the country, kosher communities aren’t quite as abundant. And so in order to survive, Fishkoff says, upscale kosher restaurants “can only exist in areas that have a critical mass of observant Jews as well as foodies” — and those willing to pay for the added costs kosher food entails. Without that convergence, you end up like the Kitchen Table, the Mountain View restaurant that was, Fishkoff says, “the only gourmet kosher restaurant in the entire Bay Area, [which] has between 400,000 and 500,000 Jews. The fact that it closed proved there aren’t enough Jews who care about kosher food enough to maintain a high-quality kosher-style restaurant.”

So will Jezebel’s kale chips and biblically named cocktails — like Samson and Delilah — seduce enough kosher Jews to keep the two-month-old restaurant’s doors open? Though the place was respectably busy on a Monday night in August, its future remains uncertain. For that reason, Jezebel’s owners are wise to play down their kosher credentials and play up the “fun, hip” part of the equation. Because it’s not located in a kosher community, Werdiger Roth points out, “they probably need to appeal to a wider audience just to survive.”

That’s certainly part of Stimler and Senderowicz’s plan. Despite the gold-plated shofar that serves as Jezebel’s door handle, it’s opulence, not orthodoxy, that’s being peddled here. In that, Jezebel is no different from its neighbors. Even if it does succeed in attracting a clientele that is neither Jewish nor remotely concerned about the intermarriage of meat and dairy, that success will rest upon the arguably greater accomplishment of raising the bar for kosher food. Ultimately, though, Jezebel is no different from any non-kosher restaurant in New York in that its survival faces some fairly spectacular odds. If it succeeds, it won’t be because its food is coincidentally kosher, but simply because it’s great.

Rebecca Flint Marx lives on the Lower East Side and writes frequently about food.