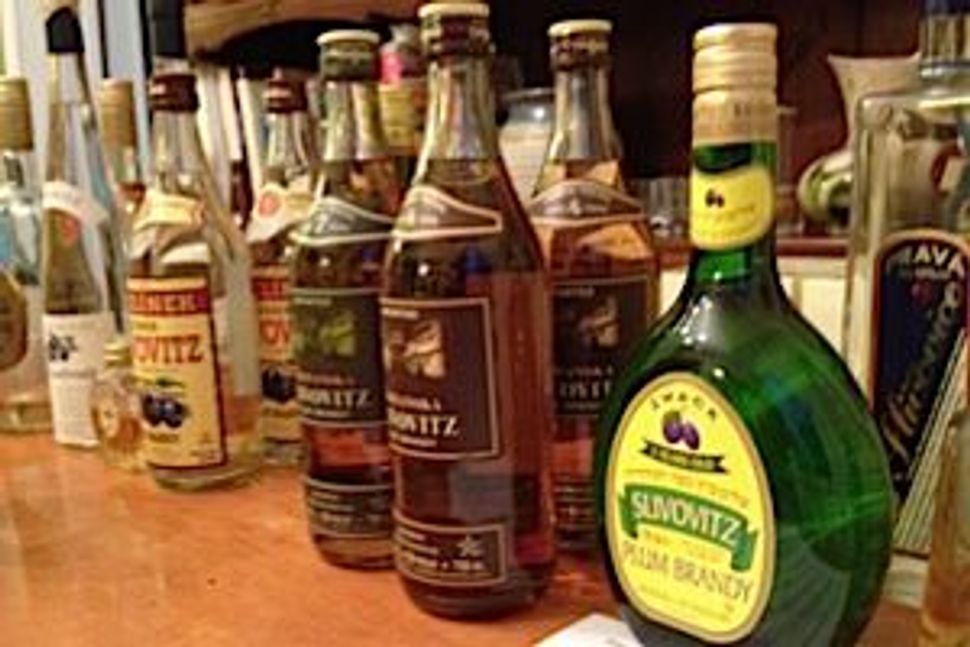 Which is the best slivovitz in the land? Slivophiles across America will have to wait until October 13 to find out the official results of the International Slivovitz Drinkers Association, which will hold this year’s U.S. Slivovitz Festival at the Northeastern Hotel on Dunlap Island, Minnesota. But a few enterprising slivofans got the party started early, with simultaneous celebrations on September 8 at a residential home in Queens, New York and at Lambert’s Seafood Restaurant and Sports Bar in Glenn Dale, Maryland, just outside of Washington, D.C.

(For more info on the Eastern European plum brandy, see my previous articles for the Forward here and here.)

Gian Cossa, organizer of the Washington festival, reported that of the slivovitzes sampled the favorites were Clear Creek, from the Clear Creek distillery in Oregon, and the Jelinek 10-year, a classic slivovitz from the Czech Republic. According to Cossa, the festival was one of the liveliest to date with an attendance of approximately 60 to 75 people throughout the day, and visitors coming from as far away as Pittsburgh and South Virginia.

Meanwhile, in Queens, a smaller group gathered at the home of Chris D’Andrea, an environmental scientist for the City of New York, who discovered slivovitz through his Croatian in-laws, and his friendship with Bill Radosevich, founder of the ISDA. While D’Andrea decided to hold a his slivovitz competition as a popular contest, rather than an official judging following all the rules and procedures of the ISDA, he reported that the Croatian 4-year Badel was an early hit of the evening and that the Troyanska 7-year was popular with the whiskey drinkers in attendance. Clear Creek also did well, he said, though he is partial to Badel, nothing that “The smooth quality wins me over every time.” After consulting with his brother-in-law and co-host, Mike Saban, he determined that the winner of the evening was indeed Badel.

While D’Andrea said that right now he needs to “rest, work, and remember that I have a family,” he hopes that next year he might be able to organize a more ambitious festival with a venue and a band. “Hell,” he wrote in an email, “we still have plenty of slivovitz.”

This year, for the first time, both festivals attempted a slivovitz cocktail, which they called the “Jeli-Roll,” using Jelinek slivovitz, Chambord raspberry liqueur, cranberry juice and seltzer. While slivovitz cocktails are difficult to create due to the strong taste and sweetness of slivovitz, the Jeli-Roll was a resounding success at both locations. I found it to be light and not too sweet, with the taste of the slivovitz dominant without being quite as overpowering as in a straight shot.

Stir ingredient together, serve on the rocks.