Have Another Shot of Slivovitz 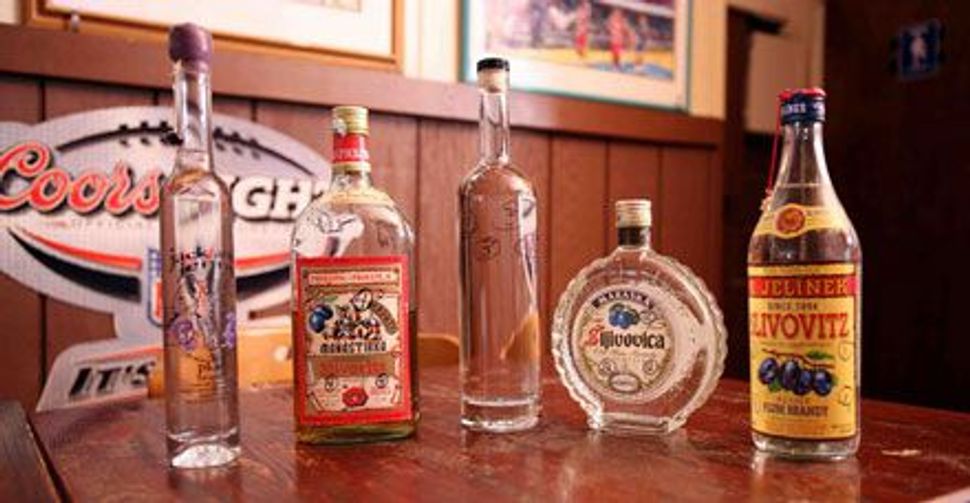 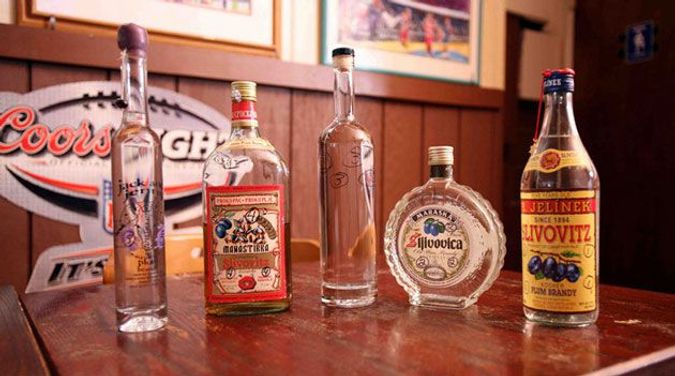 Variety: Slivovitz, like whiskey, varies from bottle to bottle. More than 70 types are now available. Image by Karl Gary Photography

The comedian Myron Cohen once said of slivovitz that it makes Canadian Club taste like vanilla soda. It’s been compared to paint thinner, lighter fluid and jet fuel, and has been pressed into service as a home cough remedy. In an air disaster scenario it might serve to disinfect a wound, or sterilize makeshift surgical tools.

But for many North American drinkers, slivovitz is a liqueur associated with holidays, family tradition and life-cycle events. Many Jews drink it on Passover, because it contains no grain and a number of varieties are certified kosher for Passover. The late Israeli wine critic Daniel Rogov recommended pairing it with traditional Ashkenazi foods like gefilte fish, or matjes herring. In Croatian, Romanian, and Serbian families it might be consumed at a wedding or anniversary, and perhaps as an after-dinner digestif. And for some seasoned drinkers, the Eastern European plum brandy is an occasion all its own.

Check out some of Ezra Glinter’s favorite slivovitz cocktails

“Whether you call it slivovitz, or slivovica, it’s one of those seminal attractions that East European folks have enjoyed for many, many years,” said Gian Cossa, a self-professed slivophile who organizes a slivovitz festival each September in Lanham, Md. By day Cossa works at the District Department of the Environment in Washington, D.C., but in his non-professional capacity he’s part of a small cadre of slivovitz fans who believe that the oft-maligned liqueur is worth a second taste.

While slivovitz is usually associated with a squat green bottle kept at the back of a grandparent’s liquor cabinet, it has, in recent years, seen a small surge in popularity. In Tel Aviv you can find it on the menus of several Balkan and Bulgarian-style restaurants, while in the U.S. high quality brands are increasingly available. According to the International Slivovitz Drinkers Association, there are more than 70 types of commercially distilled slivovitz on the market. And though all slivovitz has a distinctive (and some might say, overpowering) flavor, there are many differences among the brands, both subtle and pronounced. 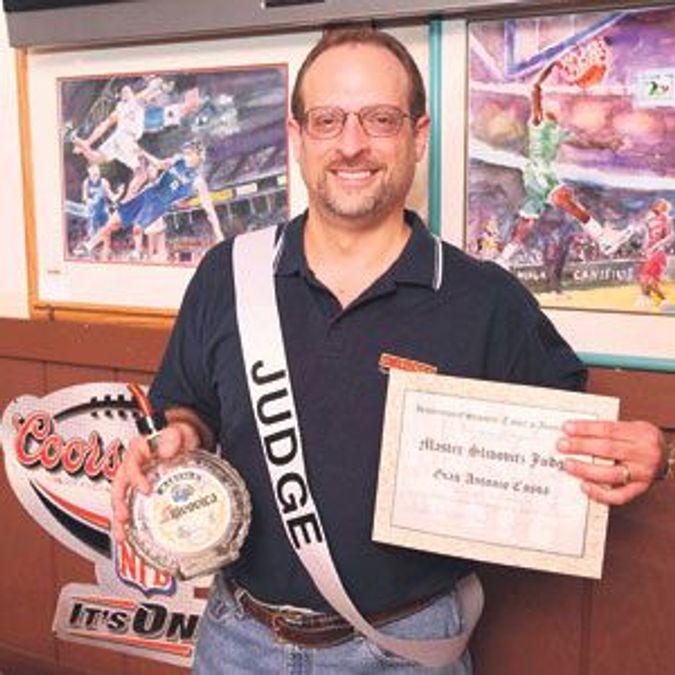 His Honor: Gian Cossa, a Master Slivovitz Judge, will host the eighth Slivovitz Festival, which will be held in Lanham, Md., in September. Image by Karl Gary Photography

Slivovitz is typically made from Damson plums, though other varieties, such as Quetsch or Italian prune plums, are also used. Depending on whether the slivovitz is aged in glass or in wooden barrels, it will be clear or have an amber color, like whiskey. Factors such as batch size, fermentation length, alcohol content and other subtleties of the distillation process create their own differences. “It’s just like there’s different types of music, there are different types of slivovitz,” Cossa enthused. “You gotta have them all.”

Unlike many slivophiles, Cossa didn’t grow up with slivovitz, though his father, Dominic Cossa, a singer who performed with the Metropolitan Opera, made his own wine. Cossa remembers buying grapes from Italian fruit sellers at the farmers market in Paterson, N.J. He and his father would crush the grapes with another opera singer, William Ledbetter, using a press that had belonged to Cossa’s grandfather.

Slivovitz was a later discovery. Cossa was introduced to it by Bill Radosevich, a lead contamination specialist from Minneapolis whom he met at an environmental trade show in 2002, and whom he credits as “the foundation for slivovitz in this country.” Radosevich, founder of the International Slivovitz Drinkers Association and the U.S. Slivovitz Festival in Two Harbors, Minn., helped Cossa develop his slivovitz palate, and in 2009 Radosevich sponsored Cossa’s application to become a Grand Master Slivovitz Judge. Though Cossa was reluctant to divulge the Drinkers Association’s precise procedures for naming judges, he did say that “every journeyman’s path is different, and customized to their distinct needs in traversing towards slivovitz enlightenment.”

Radosevich did come from a slivovitz drinking family. “When we were kids, if we were sick my dad would give us a tablespoon of slivovitz,” recalled one of his brothers, Pete, an attorney from Duluth, Minn. “All the Croatians in North Minnesota had a bottle of slivovitz in the cupboard over the refrigerator.”

For almost 40 years, until 2010, the Radosevich family owned the Earthwood Inn, a bar in Two Harbors, on the north shore of Lake Superior. One day in the spring of 2004, after his father retired, Pete was kicking around ideas with his brothers for a summer festival at the Inn. “Typically, rural bars will get a bunch of bands and a bunch of kegs of beer. But we’re intellectuals, we’re nerds, we wanted to do something different,” he said. “Three days later my brother Bill called me up and had the whole thing planned out from A to Z.”

The U.S. Slivovitz Festival includes music, food and a Miss Slivovitz pageant. But the main event is always the slivovitz competition. To evaluate slivovitz, Master Judges use a six-variable testing model that considers visual and aromatic qualities, taste, aftertaste and alcohol content, as well as a characteristic called “mouthfeel.” All of these criteria are laid out by “Radosevich’s Slivovitz Festival Competition Score Sheet,” which gives directions for tasting and judging entries. Judges are instructed to determine if the slivovitz tastes like old socks or a chemical waste dump, and whether or not it makes the tongue go numb. More favorably, it might taste smoky, or have hints of oak. If the plums weren’t stripped of leaves before fermenting it might have an herbal flavor. Judges are also expected to spit after each tasting, “albeit reluctantly.” According to the score sheet, it is mandatory to make a toast before each round.

Since its inception, the U.S. Slivovitz festival has drawn 400 to 600 people each year, and led to satellite festivals, such as a one-off New York Slivovitz Klezmer Festival in 2006. Its slivovitz awards have become so coveted by distillers that in 2005 the then-Polish consul general in Chicago, Franciszek Adamczyk, used his diplomatic pouch to transport bottles of slivovitz from Poland that would otherwise have been impossible to import. Cossa’s festival in Maryland, entering its eighth year, attracts upward of 50 people and a number of NASA scientists from the nearby Goddard Space Flight Center have become regular attendees. Though the Radosevich family no longer owns the Earthwood Inn, the U.S. Slivovitz Festival continues this year at the Northeastern Hotel and Saloon on Dunlap Island, just outside of Cloquet, Minn.

The Slivovitz Drinkers Association has a motto: “Having fun taking Slivovitz seriously!” And why not? As Cossa put it, “When you come together and enjoy something like slivovitz, it’s communal and it breaks down walls. That’s what it’s all about — trying to identify that one thing we all have in common.” Now that sounds like something we can all raise a glass to — if the slivovitz doesn’t kill us first.

Have Another Shot of Slivovitz