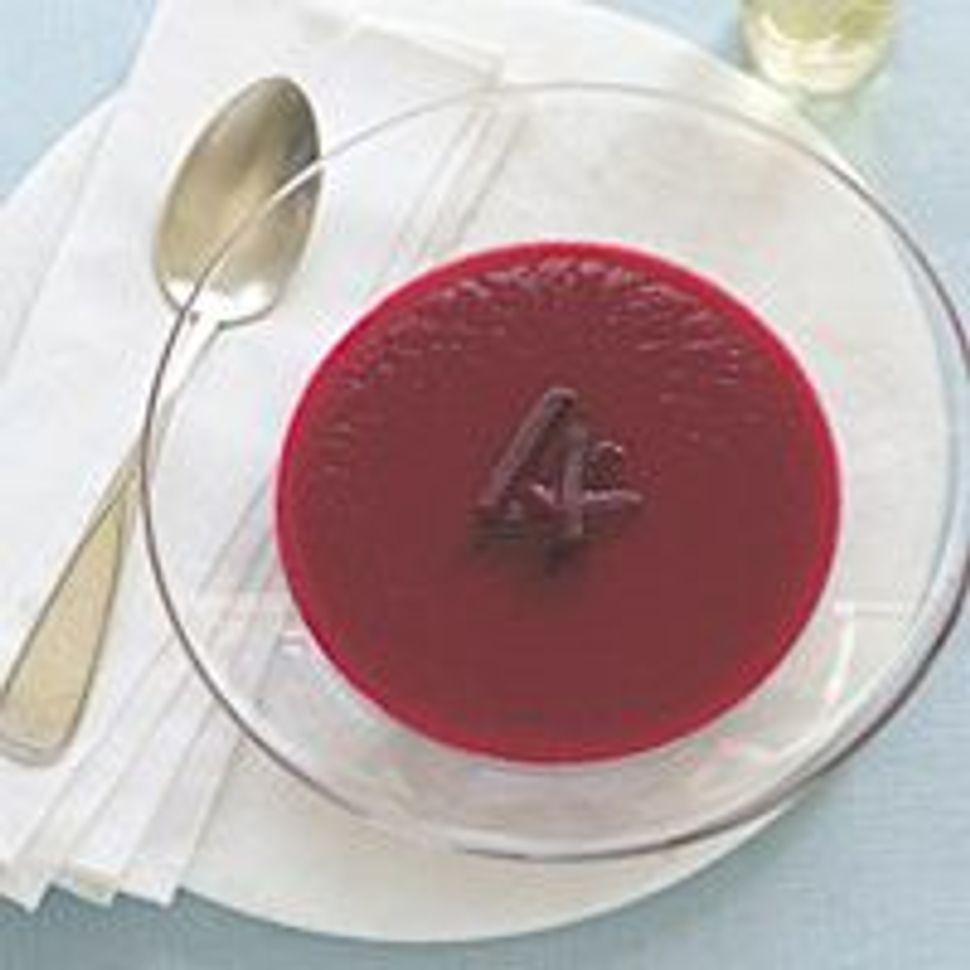 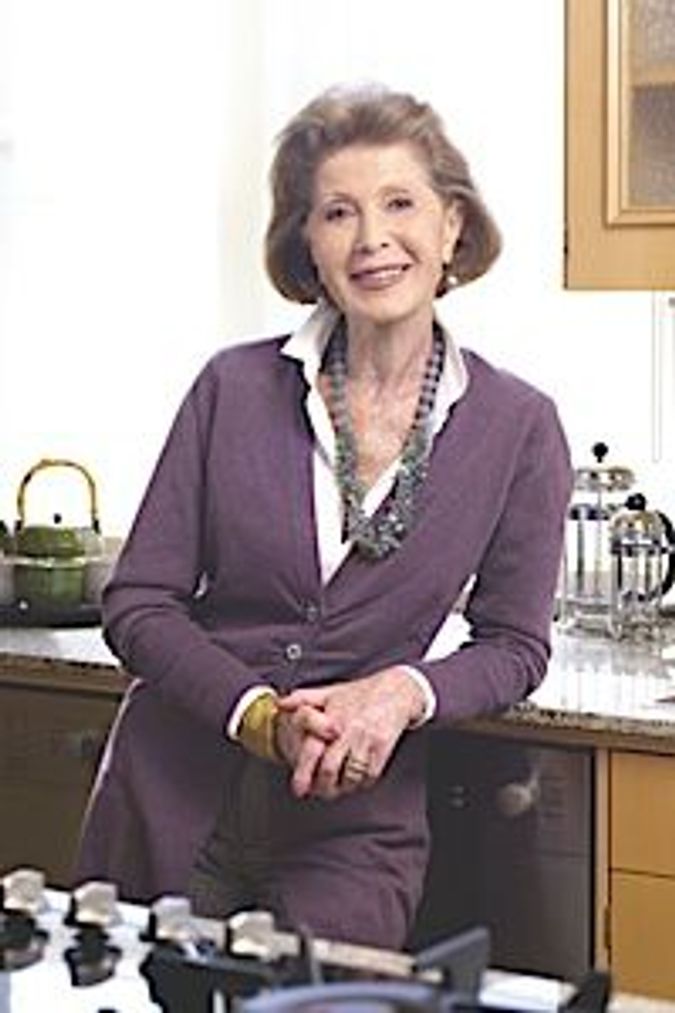 Whether or not they realize it, today’s Jewish food lovers, particularly the kosher-keeping ones, owe a debt of thanks to Helen Nash. Born in 1935 in Krakow, Poland, to a prominent Orthodox family, Nash, a longtime member of Manhattan’s Upper East Side society (she learned to cook as a newlywed, by taking lessons with culinary legends like Marcella Hazan), was an early champion of the notion that kosher food could be sophisticated and elegant rather than oppressively heavy. With restaurants like Pardes in Brooklyn and Jezebel in Manhattan making headlines today, the idea of artisanal kosher food seems almost obvious. But when Nash published “Kosher Cuisine,” those words were still an oxymoron.

Nash, now 77, recently published her newest book, “Helen Nash’s New Kosher Cuisine: Healthy, Simple & Stylish” — a cookbook that builds on her lifelong good taste while focusing on dishes that are simple and accessible for novice and studied cooks alike. Nash spoke with the Forward’s Leah Koenig about the impact of the Internet on the kosher food world, her secret to making perfectly moist chopped liver (hint: It’s not more oil) and why, at its heart, all kosher cooking is about family.

Leah Koenig: You wrote your first cookbook after your kids left for college in the 1980s. What was the kosher food world like then?

Helen Nash: Back when I wrote “Kosher Cuisine,” there wasn’t really anything else like it on the market. There were so many limitations in terms of available kosher ingredients: Only a few olive oils had a hekhsher, and hardly any vinegars, mustards or even good-quality pasta did. I have been kosher all my life and grew up with a more European palate, so I knew it could be different. I married someone who was very Jewish and spiritual but did not observe the kosher laws. So I was part of this New York world of people who did not keep kosher, and they were always criticizing kosher food, saying, “It’s overcooked,” or, “It’s too heavy!” Really, they were confusing traditional ethnic Jewish food with kosher food. So I went on this crusade to teach people that despite the limitations, it didn’t have to be that way.

How did people respond to the notion of a kosher “cuisine”?

Well, I think my first book helped turn a light bulb on for some people, but other people found the concept difficult. The first book had lots of gourmet recipes that I loved but that did not necessarily appeal to the Orthodox market, which generally wanted quicker, less complicated dishes. So my second book, “Helen Nash’s Kosher Kitchen,” which I published a few years later, was much more focused on accessibility.

Tell me more about the inspiration behind this most recent book.

I never in a million years thought I’d write another book. But in 2003, my husband [financier Jack Nash] suffered a major stroke that paralyzed him on one side and confined him to the home. I was determined to keep him as fit as possible and feed him three meals a day. So all of a sudden I needed a new repertoire of simple, nutritious and tasty recipes. I started experimenting with new dishes as a way to keep sane. When he died five years later, I lost my partner of 55 years and I was grieving. Working on this book sort of picked me up.

What are your favorite recipes in the book?

I’m particularly proud of the chocolate soufflé, because you can prepare the entire thing and stick it in the fridge. When you’re ready to bake it, it goes straight from the fridge to the oven and it still works. That took a lot of trial and error. There’s a great risotto recipe, too. Everyone is scared to make risotto, but in this one you combine the butter, scallions, onions, rice and white wine in a pot, and you add all the vegetable stock at once, not drip by drip. My chopped liver recipe is great; this is a kosher cookbook, after all, so there should be at least a few traditional recipes! I add a little sherry instead of extra vegetable oil, which makes it moist without the added grease. The short ribs are good, and the beet soup is excellent year round.

What do you think about the kosher food world today?

The Internet has made such a big difference. Years ago, there were a few wonderful Hungarian shops on the Upper East Side where you could find more obscure ingredients, like ground poppy seeds. Now most of them are gone, but you can order these things easily online whether you live in Manhattan or Wyoming.

Any words of wisdom to share after publishing your most recent book?

The horrible thing about writing a cookbook is, you write it and then you keep cooking! Immediately you realize you should have done something else or something different than you did. So you have to rely on the imagination and the inspiration of the people using it to add their own flair. But more than anything, I’m grateful. Food is about enjoyment, and kosher food even more so, because it is focused on reverence for life and family. 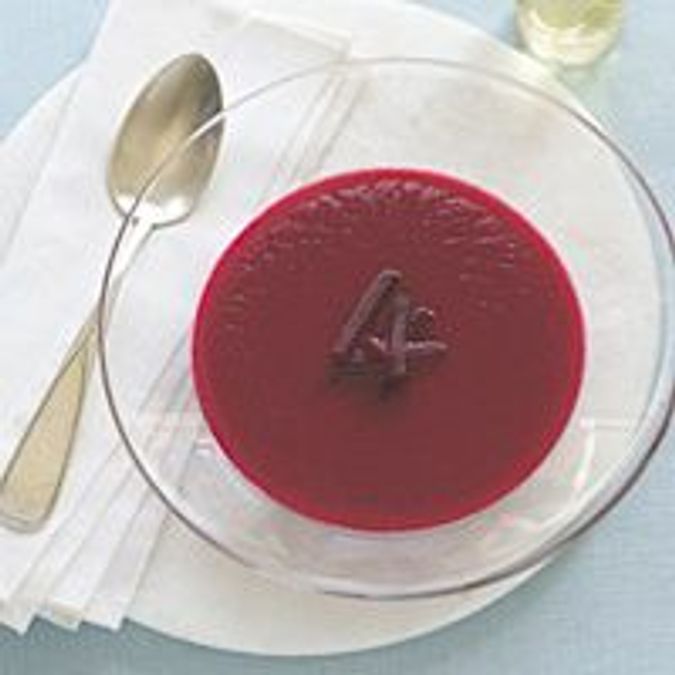 2) Heat the oil in a medium saucepan.

3) Add the onion, garlic and apple and sauté for 5 minutes.

4) Add the sliced beets and broth. Bring to a boil over high heat. Lower the heat and cook, covered, for about 30 minutes, until the beets are tender. Cool a little.

5) While the soup is cooking, wrap the reserved beet tightly in foil. Bake in a toaster oven at 400 degrees for 30 minutes, or until just tender when pierced with the tip of a paring knife. Cool, slip off the skin, and grate.

6) Puree the soup in a blender until very smooth.

7) Season to taste with the vinegar, sugar, salt and pepper. Serve topped with grated beet.

*I always wear thin plastic gloves when I work with beets, as this avoids staining my fingers with beet juice, which can be hard to remove.