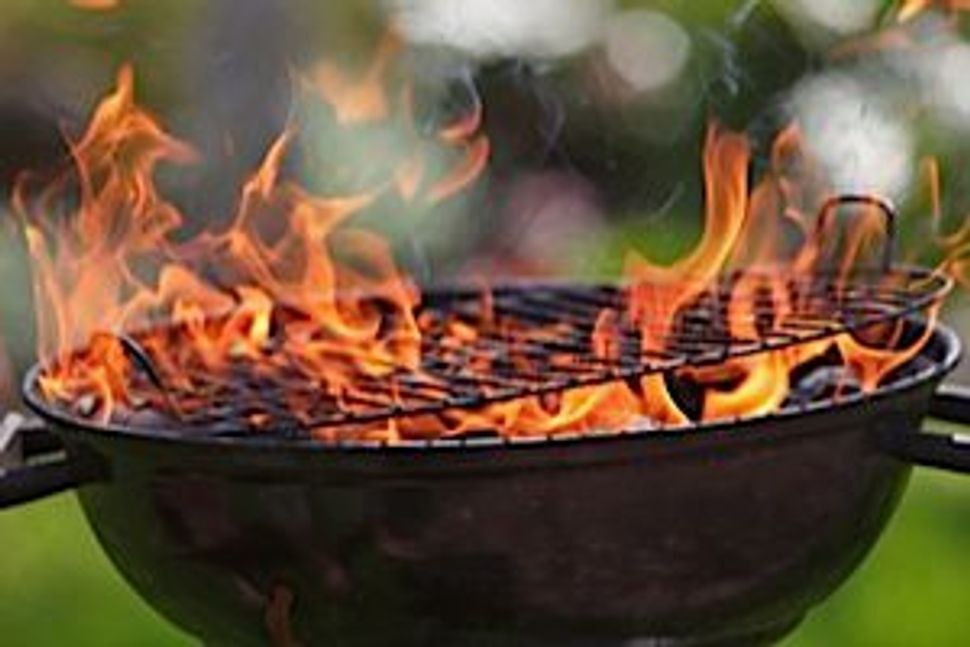 Three amateur chefs (who were chosen from more than 100 grilling fans) will show off their barbecue chops for a chance to win some serious bragging rights as “best kosher griller” at the challenge, part of the 92nd Street Y’s annual street fair.

Jarod Lojeck of Stamford, Connecticut will compete with Dov’s Stuffed Burger, two quarter-pound patties stuffed with sautéed onions and Russian dressing. The recipe was modeled after a similar cheese-filled burger he saw made on a cooking show. “The Russian dressing gives it that creamy taste that you might get with cheese,” he said.

Asked whether he was nervous about his first foray into the competitive cooking world, Lojeck admitted he’s got some reservations. “It’s my first time cooking for people who don’t know me, so there’s a hesitancy to kind of put it out there and have it subject to scrutiny. But I’m pretty confident that they’ll enjoy it,” he said.

Jill Karliner of Mamaroneck, New York — who’ll compete with a chicken and vegetable tikka masala — said “timing is something we’re a little concerned about. Also, when we grill at home we use gas grills, and this is charcoal. It’s much more time consuming and you can’t control the heat as much. So we’re spending time this week practicing on charcoal,” she said.

Up against the chicken tikka masala and the stuffed burger is Marcia Maharam’s chicken with white sauce barbeque. A recipe she inherited from her dad and tweaked over the years. The last time Maharam participated in a cooking competition was a long time ago, but she made a splash. “I did one in fifth grade, and I dropped an egg on the floor… I think I wanted to be provocative.”

Maharam, who lives in Manhattan and doesn’t often have access to a grill, says the chance to actually get her hands on a grill was an incentive to enter the competition. “I’m not nervous, cause I know they’ll like it. But it would be nice to win,” she said.

Maharam — who is not kosher but says she had a grandfather “who was so kosher that when he went to eat with my father’s family, all he’d have was a hard-boiled egg”, says the only kosher tweak she would have to make to her top-secret recipe is to substitute water for the milk, which her father sometimes used. “But I use water anyway to thin it out. There’s something in it that’s gloppy… that’s a hint.” Another important detail, her chicken is always grilled on the bone “so it gets that smoky flavor,” she said.

The judges, including Fairway’s master butcher and Dani Klein, founder of kosher travel guide Yeah That’s Kosher, will have determine who gets to take home the trophy (and which dish will end up on the menu at Smokey Joe’s restaurant in Teaneck, NJ). While we’re glad we don’t have to make that kind of decision we’re a bit sad to miss out on the taste test. Have a burger and chicken for us please!