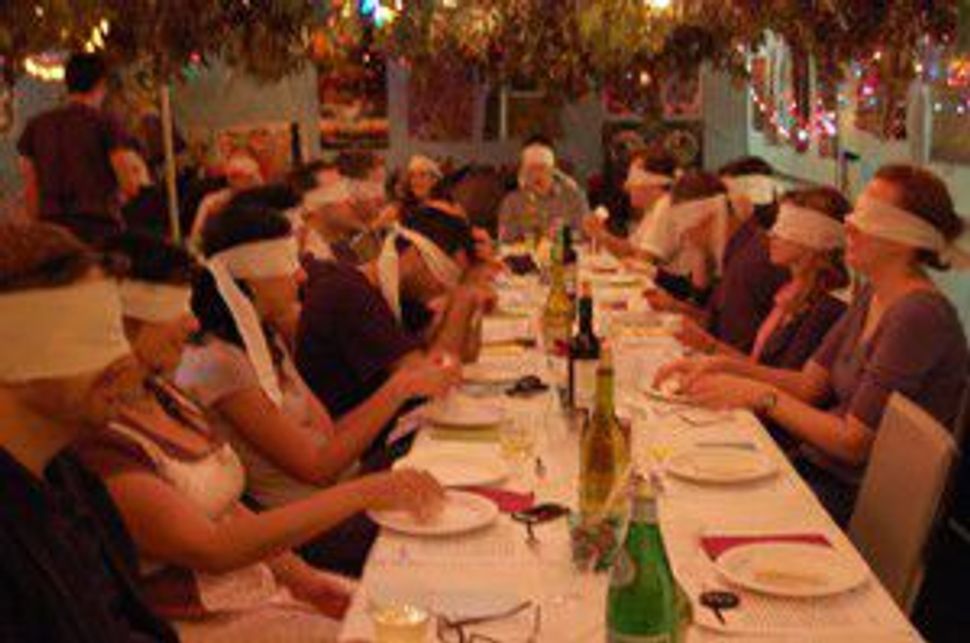 Manna, the unknown substance upon which the Jews subsisted in the desert, has been a subject of mystery and wonder to the Jewish people for many thousands of years. Last night, a trendy New York beit-midrash study group called LABA brought the question to the table once again as part of their year-long discussion of food and eating. When I spoke to event organizer and Laba artistic director, Elissa Strauss, she explained that Manna is a miracle and a mystery. It’s not what we think of when we think about Jewish food, but it was a really important part of the Jewish experience in the Desert.

Underneath a pine-scented sukkah surrounded by a hipster Tel-Aviv scene plopped a top the roof of the 14th Street Y, the thirty or so people in attendance began a discussion about the mysterious food. We were asked to blindfold ourselves ensuring the full cerebral experience. As we sat blindfolded by canvas cloth, a soundtrack of crickets began to play, transporting the audience back to the days of the desert. Something was put down on the plates before us, which we were told to eat but not see. It was fluffy and light, melting from the humidity of the New York Fall. We were told to imagine that this is what God provided for the Israelites in the desert, and like eating this maple-flavored cotton candy was an experience we had never had before.

Once able to remove our blind-folds, we launched into a discussion about Manna. “Like the holiday of Sukkot”, explained LABA Instructor Ruby Namdar, “manna is flimsy”. Both manna and Sukkot come from a time in Jewish history of instability, requiring trust and dependency simultaneously. We were asked to imagine our own fantasy foods, and while some spoke about Willy Wonka-esque creations, a self-described kosher-vegetarian in the corner immediately exclaimed, “Bacon!”

Three local bakeries provided their interpretation of what Manna could possibly taste like. It appears that the bakers and event organizers believed God had a sweet tooth, providing the Israelites in the desert with cotton candy and cookies. Erin Patinkin from Ovenly, described the cookies she brought: a dark chocolate, smoked sea salt, and caraway combination that looked like a Blondie, and a mustard-ginger experiment with hints of barbeque and Christmas. She explained that she believed Manna would have been sweet and salty. Other bakeries included Kutcher’s Tribeca who brought a more familiar black and white cookie, and Colson Patisserie who served delightful and colorful Macarons. On this rainy evening, the sukkah wasn’t exactly as comfortable as the shelter of the clouds of glory that it represented, I couldn’t help but enjoy the unique scene of a room mostly full of Israelis, faces were dimly lit by chili pepper lights, fully engaged in a discussion about Manna. The evening concluded with a song by LABA fellow Clare Burson about a 114-year old brick of cheese that had been passed down to her by her great-great grandmother. Perhaps Manna is not the cotton candy provided by the event, or the honey-coriander combination hinted to in the Torah, but rather a 114-year old brick of cheese that has sailed across the Atlantic.

Liz Traison is a recent graduate of The University of Michigan where she received a BA in History and Judaic Studies. She also studied at Midreshet Lindenbaum and Hebrew University. She is thrilled to be the newest Program Fellow at [Hazon(http://WWW.HAZON.ORG) and can’t wait for the Food Conference. She likes being outside, particularly on Skeleton Lake. And also being inside, particularly doing creative workshops in prison.