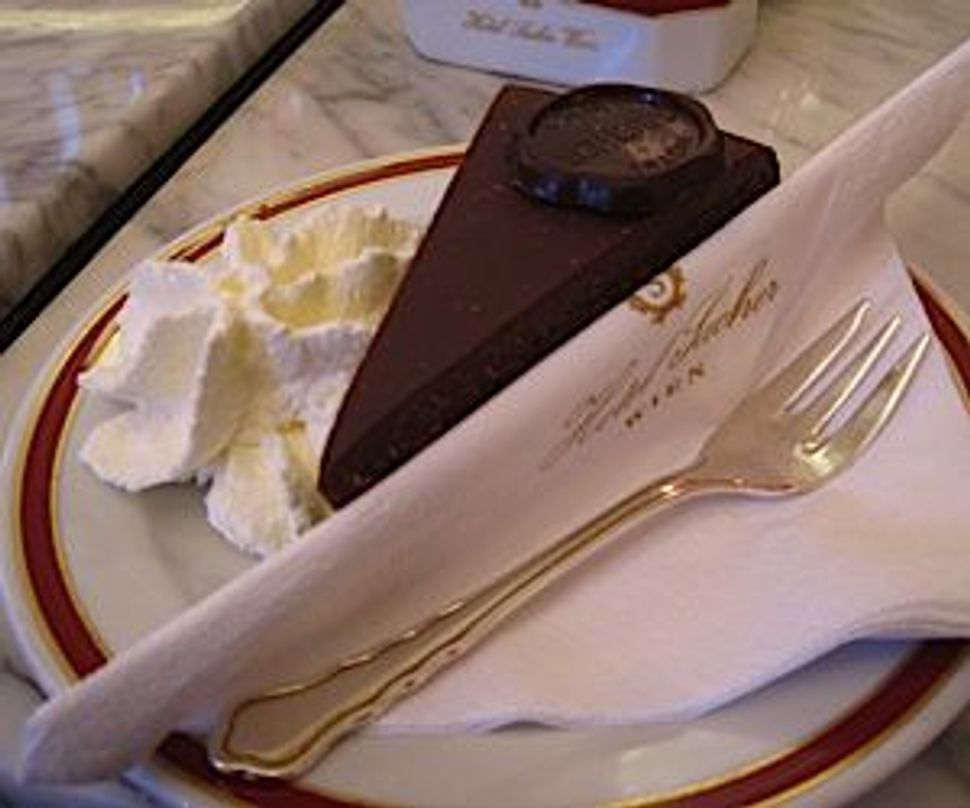 “There is only one original Sacher-Torte,” our tour guide told us, “and it is here, at the Hotel Sacher.” My two friends and I exchanged glances. “That’s the chocolate cake we’re supposed to try,” said Sam. Eric put his hands on both our shoulders. “Um, yeah. We’re doing that.”

We were three American Jews in Vienna, the birthplace of my grandfather. We befriended a pair of wandering Israelis — Yuri and Ohad — on our tour, and after its conclusion the five of us rushed to the Hotel Sacher to try the world-famous cake.

The hotel’s main café seemed like a ballroom. Fabrics that would make an interior designer weep lined the walls, chairs and booths. Windows and mirrors everywhere. Chandeliers and candelabras. Everything white and red. The waitstaff sported the same outfits that Hotel Sacher servers have probably worn since Eduard Sacher founded it in 1876.

Wearing tourist garb — T-shirts, shorts, sneakers, backpacks — we blended in about as well as Crocodile Dundee in the Hamptons. But our waitress treated us like dignified guests, anyway. We ordered the “Original Sacher-Torte” and some of the hotel’s gourmet coffees.

“Did you know he was Jewish?” Eric asked us.

He showed me the menu — a booklet attached to a small wooden pole like a flag — and opened it to the page describing the dessert’s history. According to legend, Viennese Jewish chef Franz Sacher created the cake that now bears his name when he was a mere 16 years old. It was 1832, a time of prosperity for Vienna’s Jews, and Sacher was working as an apprentice at the court of Prince Klemens Wenzel von Metternich, who was Foreign Minister of the Austrian Empire.

One evening Prince Klemens required a special dessert for his guests, but the head chef had fallen ill. Sacher stepped in and created a chocolate cake featuring an apricot jam. After becoming a chef in his own right, he popularized the dish. Then Eduard, Franz’s son, and Eduard’s wife, Anna, established the hotel. The rest is confectionary history.

“This looks so nice, I’m afraid to eat it,” I told my friends. Nestled between a whipped cream flower and a perfectly-folded napkin held in place by a fork, the cake bore the official chocolate seal of the Hotel Sacher. I cut through the multiple layers and tried my first bite.

This was no ordinary chocolate cake.

“There’s something spicy in the whipped cream,” Sam said.

Yuri studied the cake in his mouth. “I think that’s the apricot jam.”

And so it was. I dare say that none of us had tried a chocolate cake with apricot jam before, but we would all happily do so again and again. Light but rich, smooth but strong flavors. My friend Sam purchased an entire Sacher-Torte to go — all the way home to New York.

Being in Vienna had already meant a lot because of my family history. Meeting a pair of Israelis and sitting down with two of my good friends to experience an Austrian Jew’s contribution to world cuisine? That was icing on the cake.

If you can’t make it to Vienna, try making a Sacher Torte at home with this recipe.