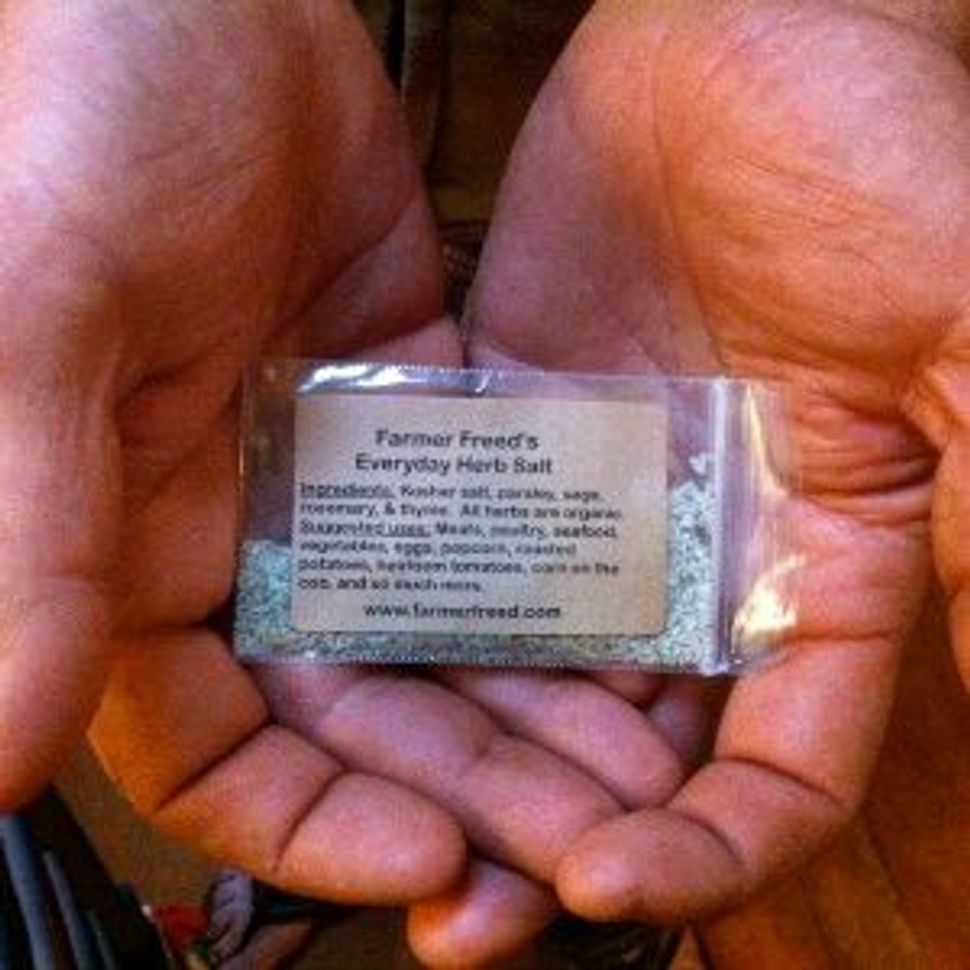 The growth the new food movement has brought about many positive changes, namely an increase in the number of young famers. There has even been an increase in the number of young Jewish farmers in the last few years, bringing us back to our roots an agricultural nation. It appears that the “farm to table” movement is doing more than bringing fresh produce to the dinner table; it is also becoming a way of life, encouraging more people to get their hands dirty. Women are making waves in the corporate sphere and pioneering brilliant entrepreneurial ideas from their kitchens, but it seems that relatively few women have taken up shovels and seeds and headed back to the land. And when it comes to full-time Jewish female farmers, the numbers are still exceptionally low.

Emily Jane Freed, perhaps better known as Farmer Freed, is leading the way as one of very few Jewish female farmers in America. It’s really no surprise that Emily found herself working in agriculture. Growing up in Sonoma County, California, she spent much of her childhood outside playing in the yard. She had local milk delivered to her house, and her parents volunteered at a Food Coop. She was at least 12 years old before she had her first candy bar. Her mom cooked what Emily describes as “pure and healthy food” using natural sweeteners like carob as opposed to refined sugars.

After Farmer Freed received her undergraduate degree from University of Oregon, she did a quick stint in television, and then volunteered at Kibbutz Lotan in Israel working in the date fields. She returned to the States to begin working for the Joshua Venture Group and then attended a six month intensive apprenticeship in organic farming and gardening at UC Santa Cruz where she completed a certificate in Ecological Horticulture. She remained there for another year, serving as a teaching assistant. Now she works as the Regional Production Manager at Jacobs Farm based in Santa Cruz. You may recognize her work in the form of organic culinary herbs and edible flowers, along with cherry tomatoes and vegetables with the Jacobs Farm/Del Cabo Label (found at Whole Foods, Trader Joe’s, Safeway, etc.)

The opportunity to turn passions and pastimes into a profession is a dream we all have, and relatively few of us have the chance to realize that dream. Farmer Freed is lucky enough to combine passion and profession on more than one occasion. In addition to managing the nine ranches and greenhouses (over 300 acres!) she also has her own newly-founded gourmet culinary salt business. With a giant farm in view from her office window, Farmer Freed frequently gets the chance to experiment with seasonal and organic culinary herbs and local produce. A few years ago she began experimenting with the dehydrator and the wide variety of herbs that are grown on the farm, including but certainly not limited to thyme, oregano, basil, and dill. She began mixing up to 12 different herbs with kosher salt and using them to garnish various foods.

It didn’t take long after she began handing out samples to her friends for them to encourage her to turn this happenstance kitchen experiment grow into a full-fledged business. It took time to perfect the recipes, and more time to figure out the business side of things. In speaking about this transition, Farmer Freed explained, “there was a lot of learning the hard way. I made lots of mistakes and you just have to hope they aren’t too big!” Today, more than 600 CSA members have received the culinary salt bags in their boxes and a number of food festivals have given out samples in their VIP bags; and having tried them myself, it seems safe to say that if Farmer Freed is making any mistakes, they are certainly working in favor of our taste buds.

Farmer Freed’s delicious Culinary Salt Blends are perfect for seasoning meats or eggs, popcorn or soup. They are festive and make a great gift for your foodie friends. Additionally, Farmer Freed and I discussed the Jewish custom of bringing bread and salt as a house-warming gift, and the other traditions of salt in Jewish history. When salt was a rare commodity, it was used by Jews to honor Shabbat guests.

Farmer Freed is using her salts to honor people in a different way: of every jar of Sababa Salt purchased, $.36 cents will go to the “You Grow Girl” campaign to support female Jewish farmers. This year the funds raised witll support a Jewish Female Farmer at the Hazon Food Conference in December. As chair of the 2009 Food Conference andone of the few Jewish female farmers on the West Coast, she knows the importance of funding, supporting, and caring for these hard working women.

Whether you know someone moving into a new house, or are just looking for a way to spice up your eggs in the morning, be sure to check out Farmer Freed’s Culinary Salt Blends. In keeping with Jewish tradition, honor your guests with this savory delight around the Shabbat table. Knowing that buying a jar of Sababa Salt will help out a Jewish female farmer, this is sodium that you can feel good about!

Learn More about Farmer Freed on her website: www.farmerfreed.com.

Liz Traison is a recent graduate of The University of Michigan where she received a BA in History and Judaic Studies. She also studied at Midreshet Lindenbaum and Hebrew University. She is thrilled to be the newest Program Fellow at Hazon and can’t wait for the Food Conference. She likes being outside, particularly on Skeleton Lake. And also being inside, particularly doing creative workshops in prison.