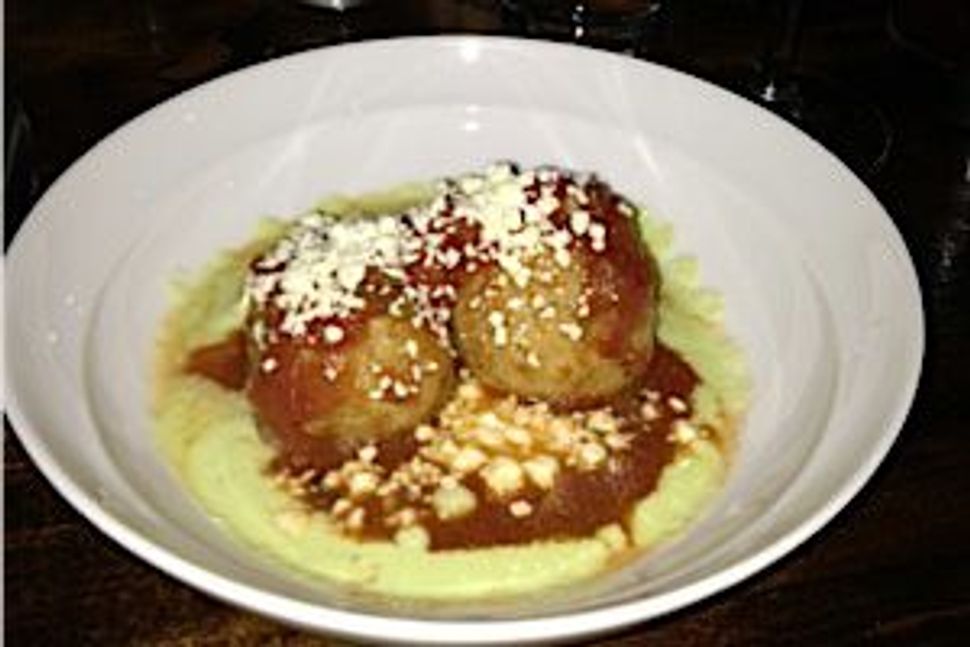 Image by Butter and Egg Road

If you are a Jewish food enthusiast and happen to live in New York, your calendar has been quite busy of late. Restaurants are hosting deli-themed Shabbat dinners, museums are hosting talks on gefilte fish and venues across the city are nodding to Ashkenazi fare in any number of creative ways. These events are focused on reimagining and updating Jewish cuisine, and have been permeated with a sense of nostalgia. They have also, seemingly, been attended by heavily Jewish audiences.

But this was refreshingly not the case on Sunday night at the cozy East Village restaurant JoeDoe. Here, a group of a dozen diners, most of whom were tasting Jewish cuisine for the first time, feasted on a menu created by celebrated Chef Joe Dobias, who is also not Jewish.

The dinner was conceived of by the members-only traveling supper club, Butter and Egg Road, which gathered the group of New York transplants and vacationing visitors.

For his guests, Dobias created a menu that exhibited his strong love and respect for traditional Ashkenazi cuisine, while twisting the dishes in ways that were less emotional and more technical.

Chef Dobias may not be a member of the tribe, but he is no stranger to Jewish food. Since opening JoeDoe in 2008 with his partner Jill Schulster, the pair have actively infused their “Aggressive American” cuisine with Jewish themes and have hosted Jewish events such as a Passover seder in 2011. Dobias originally acquired his Jewish cooking skills to impress Schulster’s parents, but developed a passion for the food along the way.

Curiosity was the theme of the evening this past Sunday, starting from the moment guests gathered around the “All Things Jewish Buffet,” which served as the first course. At the prompting of the attendees, Schulster explained the origins of matzo to the group, retelling the Passover story with gusto. The few Jewish diners present added their own commentary, and guests were overheard practicing their pronunciation of the word “kreplach,” which was also featured on the buffet, fried and filled with ground meat. The course was rounded out with homemade challah served with honey butter, pickled onions and cabbage and an assortment of nuts and dried fruit.

The guests took their seats for another matzo-centric course of matzo balls via Mexico. Here, the discussion went to texture, and Schulster explained the two camps of matzo ball makers — the dense camp and the fluffy camp. Dobias, committed to toothsome foods with bold textures, is of the dense camp, and his matzo balls were served not in a broth, but in a shallow sauce of spicy tomato, cotija and tomatillo. For the diners familiar with matzo balls, the dish hardly evoked feelings of Shabbat dinners or grandmothers’ homes. This was a fully reimagined matzo ball, a nostalgia-less play on an Ashkenazi staple.

The main course consisted of brisket, slow roasted and paired with a tongue perogi and a sweet and sour sauce. This was, perhaps, the most traditional of the courses, but the thinly sliced shaved meat was reminiscent of Dobias’s years in the kitchens of Asian restaurants and not of the thick cuts of the Jewish table.

Dessert consisted of the seasonally appropriate honey cake with plum sorbet and julienne apples. It’s moist texture and buttery taste reminded one more of a pound cake then anything served on Rosh Hashanah.

As with any ethnic cuisine resurgence, the temptation toward nostalgia is understandable and even justified. This past Sunday evening at JoeDoe, however, was a wonderful example of a meal that looked to Ashkenazi cuisine for unabashed inspiration, but wasn’t afraid to deviate far, far, from the norm.