Confession: I have a Secret Snack Stash 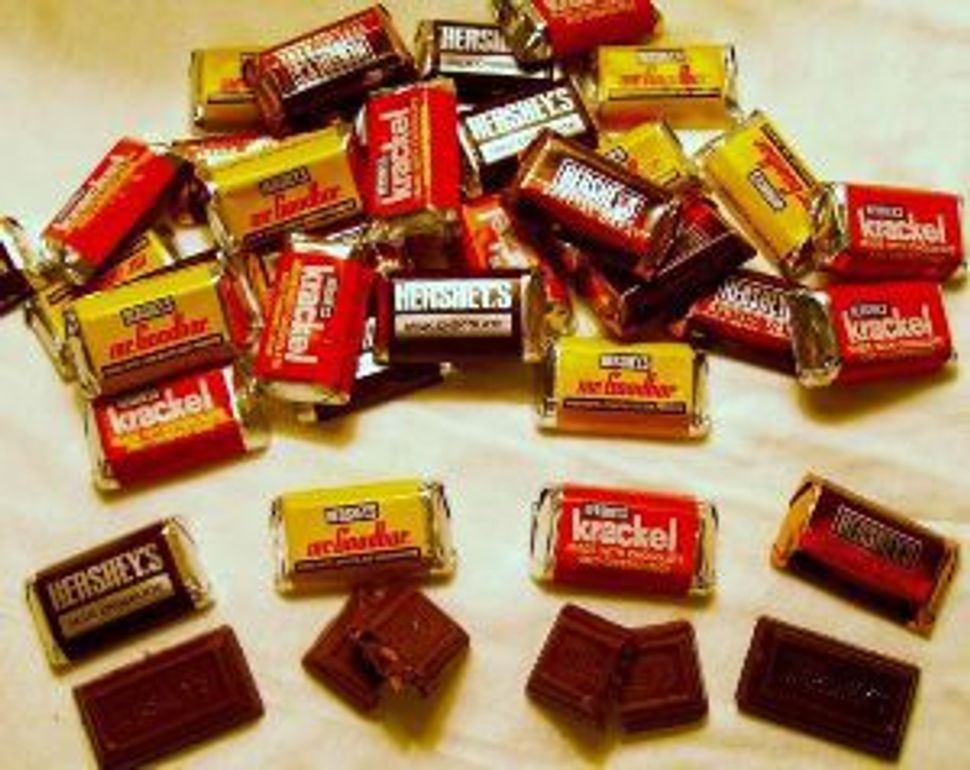 I work for the largest Jewish environmental organization in the United States. The kind that has a written food values policy which outlines the steps we, as an organization, take to ensure that the food we serve to our guests, participants, and each other is kosher, ethical, healthy, delicious, and a conversation starter.

Why then, do I have a five-pound bag of Halloween chocolates in my desk drawer?

Because somewhere around 4pm, it’s time for chocolate. And I don’t mean the good-quality, fair trade, dark chocolate (I keep that hidden in a different drawer), I mean that sugary, processed, preservative-laden, “exactly what I wanted right now” chocolate.

Nutritionally, sugar cravings like this might mean “adrenal fatigue” which can present due to stress, lack of sleep, or a need for physical activity (note: I’m not a doctor, I just ran a search on the Internet). I’ve found that a great way to avoid that mid-afternoon craving is by drinking water throughout the day, eating some fruit for a snack (bananas especially), taking a break to walk around for a few minutes, or (you were waiting for this one) riding my bike to work in the morning.

But 4pm comes around, and the day was busy, and there’s a creeping want for chocolate.

Sometimes, I give in.

Why not? For my body, a few mid-day sweets isn’t an unhealthy habit.

Denying myself a craving for chocolate by snacking on fruit or going for a walk might satisfy the physical component, but the remaining mental and emotional aspects might be left dangling.

Craving is an interesting word and idea. The word doesn’t even imply an actual “need,” it’s a strong, almost consuming desire. It’s a want.

Rabbi Neal Joseph Loevenger, a member of Hazon’s Rabbinical Advisory Board and New York Ride participant, points out that the Ba’al Shem Tov urges us to “pay special attention to our ‘cravings,’” and to find a way to allow ourselves a healthy, measured way to taste the satisfaction, without going overboard. As he says “keeping things in perspective, nurturing a consciousness of what is long-lasting and what is momentary.” In a sense, the same way we elevate a meal by keeping in mind the work put into each part of it, its nutritional value, and the energy we take from it, snacking should come with the intention that it is a treat, and not for binging or as a solution to hunger, depression, or stress.

Wouldn’t walking through my office with a Kit-Kat get me in trouble though?

No. Having a food values policy doesn’t dictate what we feed ourselves. That would be imposing, and would go against one of Hazon’s core values of reaching people where they are. The food policy helps us feed our friends while using the food itself as a teaching tool; a way to say “this is an example of kosher, ethical, healthy, delicious, and cost-effective. And it’s doable — not just a set of ideals we’ve written out as a fantasy.”

Even with all this, it’s still only part of the reason for my cache.

In the month or so that I’ve had this bag of chocolate goodies, I’ve been good, and have only dipped into it occasionally. The other part of why there’s a (half-eaten) five-pound bag of Halloween chocolates in my drawer is sharing with the folks I work with.

While we all know that the sugar fix isn’t the most nutritious, healthy, or best answer, come mid-afternoon, I look forward to my visits from some of my zombie-eyed colleagues when they need to escape the headspace of their desk. They’ll come by, grab a handful, and we both get to de-blur from the focus of the computer monitor. Sometimes, just that moment of interaction works just as sweetly as the snack.

Consider this the next time you feel yourself fiending for a particular snack: yes, it might be better to acknowledge the desire and overcome it, but sometimes it’s okay to acknowledge it with your tastebuds too, but only if your body can handle it and you’re not going to overdo it.

And the next time you’re at Hazon’s New York office at Makom Hadash, stop by my desk to say hi and maybe leave with a handful of Kisses.

During the week, Edward Angert is Hazon’s Office Assistant. On the side, he’s a roller skating instructor, cyclist, Couchsurfer and host, learner, CSA member, and word-makerupper.

Confession: I have a Secret Snack Stash