5 Wacky Ways To Eat Your Pastrami 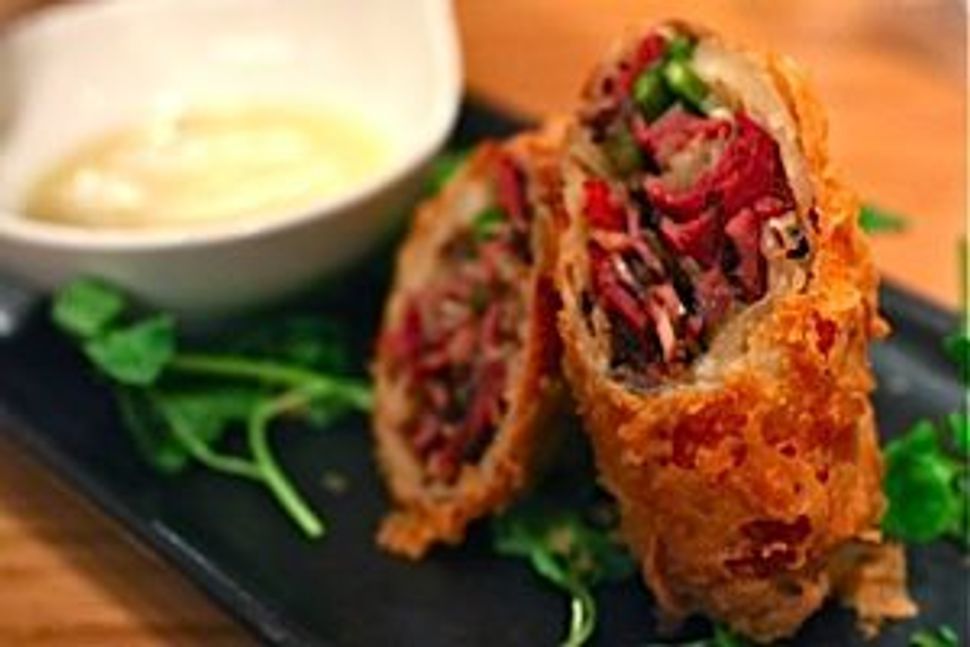 At Red Farm in New York, pastrami is stuffed into an eggroll for a twist on the Chinese classic. Image by Courtesy of Red Farm

Pastrami is the staple of Jewish deli food: unctuous and fatty, thinly sliced and layered over a good seedy rye with just a dab of spicy mustard and, it makes one of the more perfect, simple sandwiches. But now the workhouse of the delicatessen is migrating into unusual territory. Chefs around the country have begun to experiment with pastrami in a variety of dishes. From crunchy and chewy pastrami nachos to frothy pastrami ramen, the humble sandwich filler has gotten a whole new culinary reputation as a versatile protein and a clever bacon replacement, too. Below, we present some of our favorite pastrami innovations.

Would you try these pastrami concoctions? Let us know in the comments.

Cantonese-American restaurant Red Farm introduced the Katz eggroll, a pastrami update on the grease-bomb take-out staple. Serious Eats sampled the roll, and recommends the “tender, salty pastrami inside and the incredible lacy spring roll wrapper,” a deft update on the heavy appetizer. Los Angeles food truck M.O. Eggrolls has been doling out similar concoctions too. Perhaps it won’t be long before you’ll find them alongside your Kung Pao.

Los Angeles’ answer to the diaspora is the pastrami burrito at Oki’s Dog, a wicked combination of pastrami and chili cheese packed into a tortilla with onions and peppers. It’s a dish that no less than LA Times food guru Jonathan Gold endorses. “It’s Jewish deli food made by Mexican immigrants, and served up to an African-American community,” he said to The Forward. “It’s an incredible combination.” Another specialty? The titular Oki Dog, which combines pastrami with two kosher hot dogs and a pile of fixings.

Orange County, California’s gourmet waffle sandwich spot Bruxie Bruxie has renovated the pastrami sandwich with one sly addition: s sweet, fluffy Belgian waffles replacing the traditional toothsome rye. A dollop of spicy brown mustard, a smattering of crunchy coleslaw, and, of course, a briny-sweet pickle finish the sandwich. All the joys of the Lower East Side corner deli stuffed into a breakfast treat? Yes, please.

Brooklyn’s Dassara gives pastrami yet another Asian-style twist by including big meaty hunks of it from nearby Mile End Deli and dense, comforting matzo balls in its Deli Ramen.

Heading to Citi Field to nab a Mets game? Then go to Keith’s Grill check out this uniquely New York take on ballpark food, a bed of crisp tortilla chips covered with pastrami, sauerkraut, and thousand island dressing. He calls them “pastrachos.”

5 Wacky Ways To Eat Your Pastrami