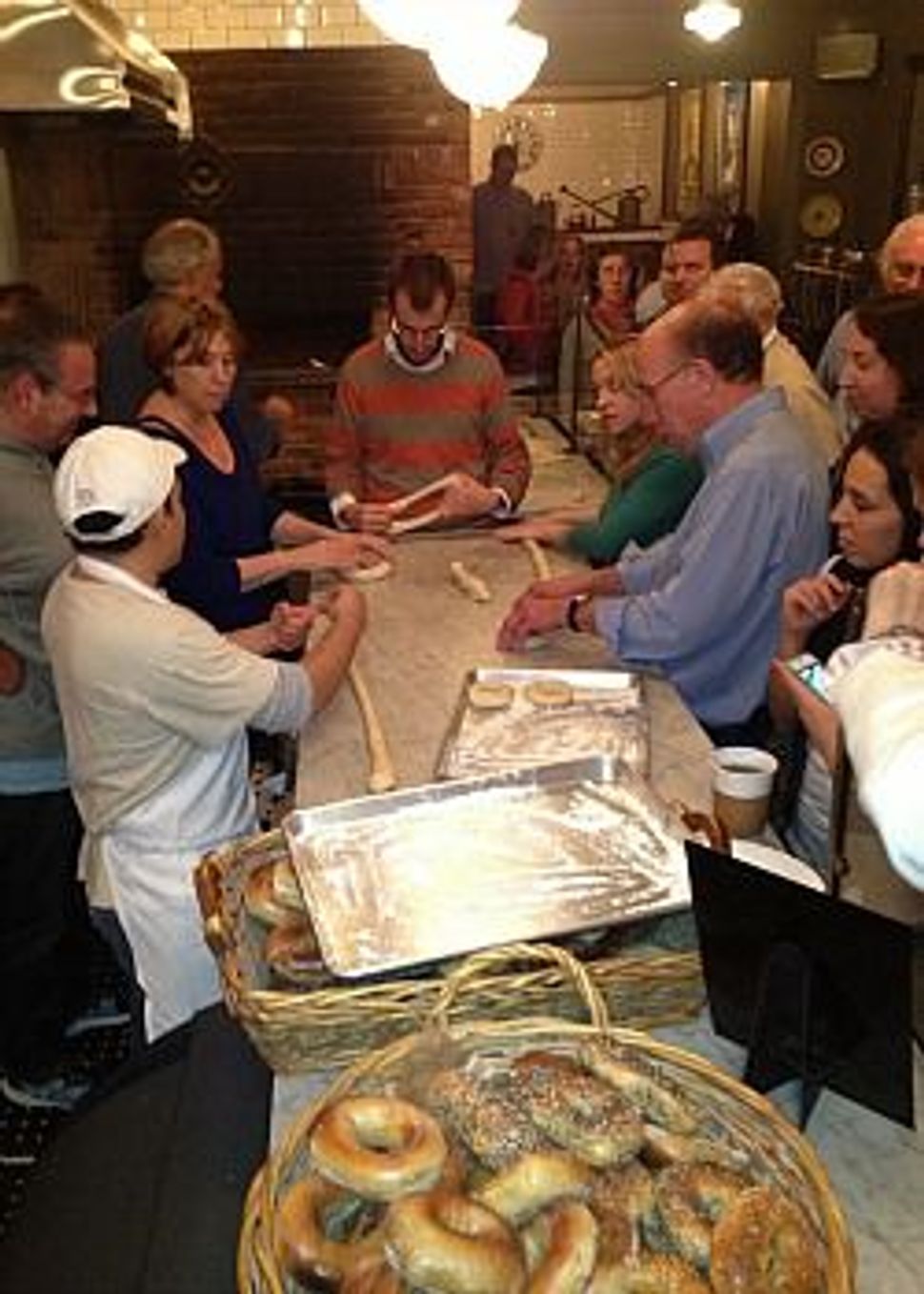 The humble bagel is a staple of Western Jewish culture, but what most of us know about it amounts to little more than a shmear. After all, bagels are generally something we buy, not bake.

This makes the bagel ideal for a hands-on workshop, especially at a restaurant-bakery called Spread Bagelry, one of the few United States outposts for what many people would call the food at its very best: the Montreal-style bagel. It’s never made by machine, boiled in honey water, and always baked in a wood-fired brick oven that’s hotter than yours.

And so last night, about 40 people drifted into Spread in downtown Philadelphia, pumped by the promise of watching the bagel-making process and even attempting to roll their own.

That recipe may have its own unique proportions with a twist of an ingredient or two, but Spread’s bagels are remarkably close to the taste, texture and triumph of their vaunted relations about 450 miles north. There, in Montreal, bakers still famously make them the way their ancestors did in Poland and other overseas bagel capitals, with such basics in the dough as malt, gluten, sugar, oil, yeast and the slightest pinch of salt. In Montreal, the idea of a machine-pressed bagel composed of unsweetened New York-style dough, then baked in a steam-infused oven, is entirely alien.

At Spread, where the oven is 20,000 pounds of brick and mortar and sits on a half-ton of steel that drives deep into the building’s foundation, the rings of dough bake to a 10-minute finish in 600 degrees generated by burning kiln-dried oak logs.

Onlookers listened as Lisa Cosgrove, married to one of the owners, described the makeup of the dough. Next, Rosenblum laid out the process: hand-roll strips of dough; loop it onto your palm over the inside of your thumb; roll it over a marble table until the ring inside your hand is smooth; take the circle off your hand and boil it for 20 minutes (turning once), and finally remove it from the bath with a strainer, dip it in bowls of various seeds and seasonings and slide it deep into the oven.

When it comes to the rolling, “you’ll see that it’s not what you think it is — it’s not that easy,” Rosenblum cautioned. Proving the point, Victor Monroy — Spread’s master roller who fashions about 1,100 bagels a day — then put together a tray of raw rings in a flash. When it was everyone else’s turn, the small marble counter filled up with the hands of rollers and loopers, making many respectable rings, if slowly.

The evening was the idea of Warren Hoffman, director of programming for Philadelphia’s downtown Gershman Y, which is running sessions with other organizations — among them the National Museum of American Jewish History in the city — called “What Is Your Food Worth?” The program examines the connections between Jews and food. Bagels started out Jewish but “became part of the American culture,” Rosenblum told the crowd. “We see every possible demographic come through here.”

Back at the marble counter, Shelley Richardson held her own rolling her second slab of dough and rejoicing in the hand-made bagels she ate after services in her Christian Science church in Eugene, Ore. But after moving to Philadelphia, she found no such bagels until she learned of the session at Spread, two blocks from the Christian Science church she now attends.

For Richardson, the workshop also meant finding a decent local bagel. For others, it meant a closer relationship to some part of their culture and even the way it’s passed on. It was a girls’ night out for Bridget Schneider and Jeannette Boulind, who both patronize Spread and also know what a bagel tastes like in Montreal. “Bagels are such a huge part of our lives as moms of young children,” said Boulind, “so it’s good to understand what bagels are all about.”

Bruce Hirsch described his rolling and looping: “Let me say, my future is not in bagel baking. I’ll specialize in eating.” Which everyone, in the end, did.