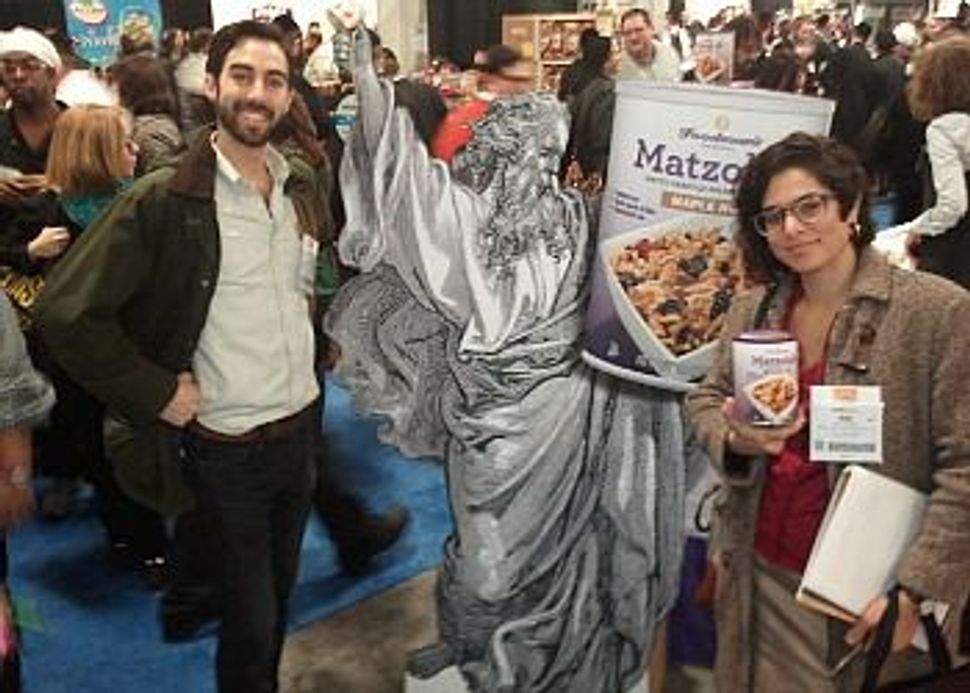 But a multitude of small, niche entrepreneurs in the industry show up as well, reflecting not just the trajectory of kosher food over the years, but the way in which overarching American food trends filter into the Orthodox world. Kosherfest is a far cry from the artisan food world of Brooklyn, where we are from — and where our business, The Gefilteria, is located. So we went down to New Jersey to report as independent purveyors. Here’s our minute-by-minute view of this very kosher landscape.

11:13 am: We know we’re in the right place when we see kippahs and beards and Jews walking with a mission: free food. We’re in!

11:46am Liz notices the Adama Naturals booth. She wonders what makes it natural. Turns out it’s meat without nitrates. “I was hoping for probiotic pickles from Adamah Foods,” she says. While chatting with the cheery meat lady, several people come by and claim that they’ll be back later, since the Kosherfest mantra is “milchig in the morning, fleishig in the afternoon.”

11:49 am Steve Leibowitz of Guss’ and United Pickle claims his are the “best pickles in the world.” Jeffrey goes in for a taste, keeping his judgments to himself.

12:05 pm We meet Paul Bensabat, C.E.O. of Manischewitz. He is from Morocco and so is his longtime business partner Alain Bankier. With spirit, gusto and passion, Bensabat tells us of his attempt to fuse Mediterranean flavors with Ashkenazi staples. “We have a different vision of kosher food,” he exclaimed. We were excited. He spent twenty minutes talking to a couple of Brooklyn gefilte mongers and seemed to really enjoy himself. We end our time with Bensabat by munching on chocolate covered potato chips. Strangely delicious.

12:45pm Fish salami?! “You can’t tell the difference, right?” asks the proprietor. Mostly we couldn’t, but mixed emotions (and reactions by our taste buds) ensue.

12:51pm We approach a sour candy stand and Jeffrey points out that the striped candies look like bacon. The Hasid working the booth is visibly uncomfortable with the suggestion.

1:10pm We learn that Dr. Praeger of the Dr. Praeger’s veggie burgers passed away from cancer in September of this year. This is a serious moment amidst all the commotion. Rest in Peace, Dr. Praeger.

1:16 pm The mood quickly shifts upward as we encounter a giant cardboard Moses holding the 2012 winner of best new Kosher for Passover Product: Matzolah! It’s like granola made of matzah and, frankly, it is delicious. “The Trail Mix of the Exodus,” describes Dyana Furmansky, Director of Marketing and PR. “When God gives you matzah, you make Matzolah,”

1:57 pm Unsettled stomachs will not deter Jeffrey from approaching Rabbi Genack of the Orthodox Union. Rabbi Genack, he explains, “is one of the most powerful men in the kosher industry.” He is seated apart, kind of like the Godfather of Kosher.

2:03 pm We stumble upon a mincha service in an alcove. Men only.

2:08 pm We see a smiling face. Shalom Halpern of A&B Famous Gefilte. We’ve met him before and are greeted warmly in gefilte solidarity. He shows us his new product: gefilte sushi.

2:52 pm Liz tries to Instagram a moment but there is too much grease on her phone’s camera lens. #GottaLoveKosherfest

2:54 pm Dehydration setting in. As if preordained, we stumble upon the Neviot Israeli water company. Jeffrey: “Nothing like importing water from a region that has so little of it.”

2:57 pm We spot a delegation of Center for Kosher Culinary Arts students and their chef instructor walking around the Kosherfest expo hall. Their experiences ranged from “overhwhelming” to “intriguing” to “amazing” and “eye-opening.”

3:19 pm We encounter a like-minded soul at the Divine Organics Booth. Our new friend Kelly Peach talks about the lack of interest in her booth because there doesn’t seem to be an enthusiasm for organics here at Kosherfest.

3:36 pm We made it to the end of the line!!! We’ve seen it all — all seven rows of kosher food, covering 61,000 square feet. Or at least most of it. We a make a beeline for the bathrooms, when we pass the Agriprocessors booth for Aaron’s Gourmet Kosher. At past Kosherfests, the agriprocessors scandal cast a darkness on the industry and the proceedings. Today it didn’t seem to matter, but we skipped the booth all together in solidarity.

3:45 pm As we walk out, Liz regrets wearing heels and overhears a fellow attendee wishing the same. Jeffrey’s stomach is going to explode. Let’s get the hell outta Kosherfest. We miss Brooklyn.