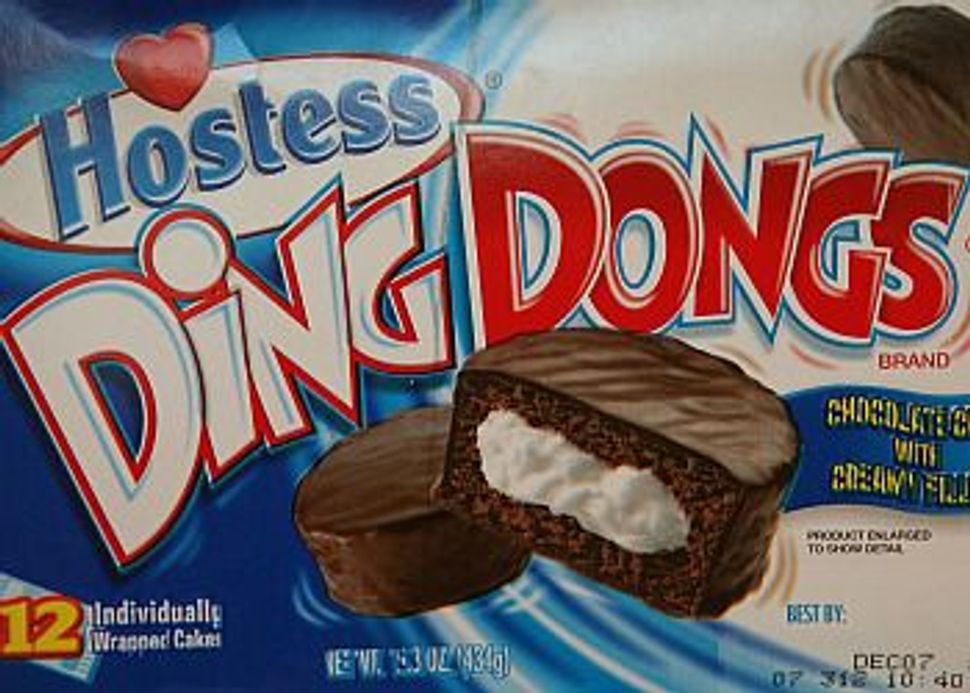 Ding Dongs hold a special place in my heart. My best friend growing up in Canada was an American. Whenever her family would travel to New York they would bring numerous boxes of Ring Dings back with them and keep them in the freezer. Sure, there were lots of similar sandwich cakes in the great white north, but none had a hechsher. If we were particularly well behaved, we would be allowed to take one from the coveted stash. The memory of the feeling of the frozen squishy cake and its filling, still brings a smile to my face.

With the announcement of the closure of the Hostess brand, the memories of Ring Dings resurfaced. I found myself mulling the loss of an item I have not eaten since before my bat mitzvah. The public discussion of the closure of the Hostess plants centers around the financial challenges the company faced as it sought to restructure. But even without the current financial downturn, the snack cakes may be part of the shifting American foodways.

Rabbi Yoel Bin Nun once explained to me that the plastic wrap we put on modern packaged foods reminded him of the dewy coating that surrounded the manna in the dessert. Our mass produced food, he explained, like the manna, can be made to taste like anything. Moreover like the ancient Israelites, we barely have to work to acquire it.

This description came back to me as I considered the items synonymous with the Hostess name. In the years before mass industrialized production of food, feeding a family was a laborious effort. Basic foodstuffs had to be transformed — individually and often without the aid of running water — into edible dishes. Without refrigeration, fresh food had to be eaten quickly or painstakingly canned, salted, smoked or dried. The ability to commercially can fruits and vegetables, for example, meant that cooks (usually women) were able to rely on a ready supply year round. Canned goods were marketed as both more convenient and healthful — worth paying extra for. Though it was not invented until 1930, the Twinkie was the height of convenience. With its single serving wrap and interminable self life, the affordable small treat could be relied on for consistency of taste and texture. It too was a modern miracle. Manna from heaven.

Other staples of the Hostess line also captured the zeitgeist of the 20th century. In 1913, after his first day in office, President Woodrow Wilson hosted a banquet which featured only white dishes which highlighted the purity both of his administration and of the food he would consume. It was no surprise then Wonderbread — enriched with vitamins, very white indeed, and not likely to spoil — became widely popular when it was introduced in 1921.

But by the time I was growing up in the 1970s, there was awareness that as convenient as these wonder foods were, they were not necessarily all that wonderful. Far from Berkeley California where Alice Waters was founding Chez Panisse in an attempt to focus attention local ingredients, my mother was shopping at the health food store, making brownies without refined sugar, and pushing brown bread. Twinkies and white bread simple did not exist in our house. Whereas I fought my mother’s tendencies, relishing the Ring Dings at my friends’ homes, today my teenage son was perplexed that anyone would care about the disappearance of such an irrelevant brand.

Canned green beans and sliced bread are still staples of the American kitchen. But today, they are more likely to be food for emergencies or good for saving a penny or two. Growing numbers of Americans are willing to go out of their way and pay a little extra to choose the alternatives found in the farmers markets which are fresher and healthier, more in line with our modern values.

The Bible tells us that the manna came in part as a convenient, easy alternative to the Israelites’ longing for the plentiful food they had had in Egypt. Eventually reality set in. After forty years of wandering, they entered the land of milk and honey, leaving the dew covered manna behind in the dessert. Sure they had to work for the food, but it was beautiful, plentiful and sustained them well. It was worth the work.

It is hard to see an American icon fade away, but it is also time to move on. The Hostess brands were products of their time, dare I venture, products of a culinary dessert. More than the challenges of economic hard times, the closure is a sign of broader changes in the way we think about food. And if you are really craving a cream filled snack cake, there is an artisanal baker in my ‘hood who does them up by hand real nice, red velvet with cream cheese, chocolate with orange caramel. Of course they are neither convenient or cheep, but they are exceptionally delicious.