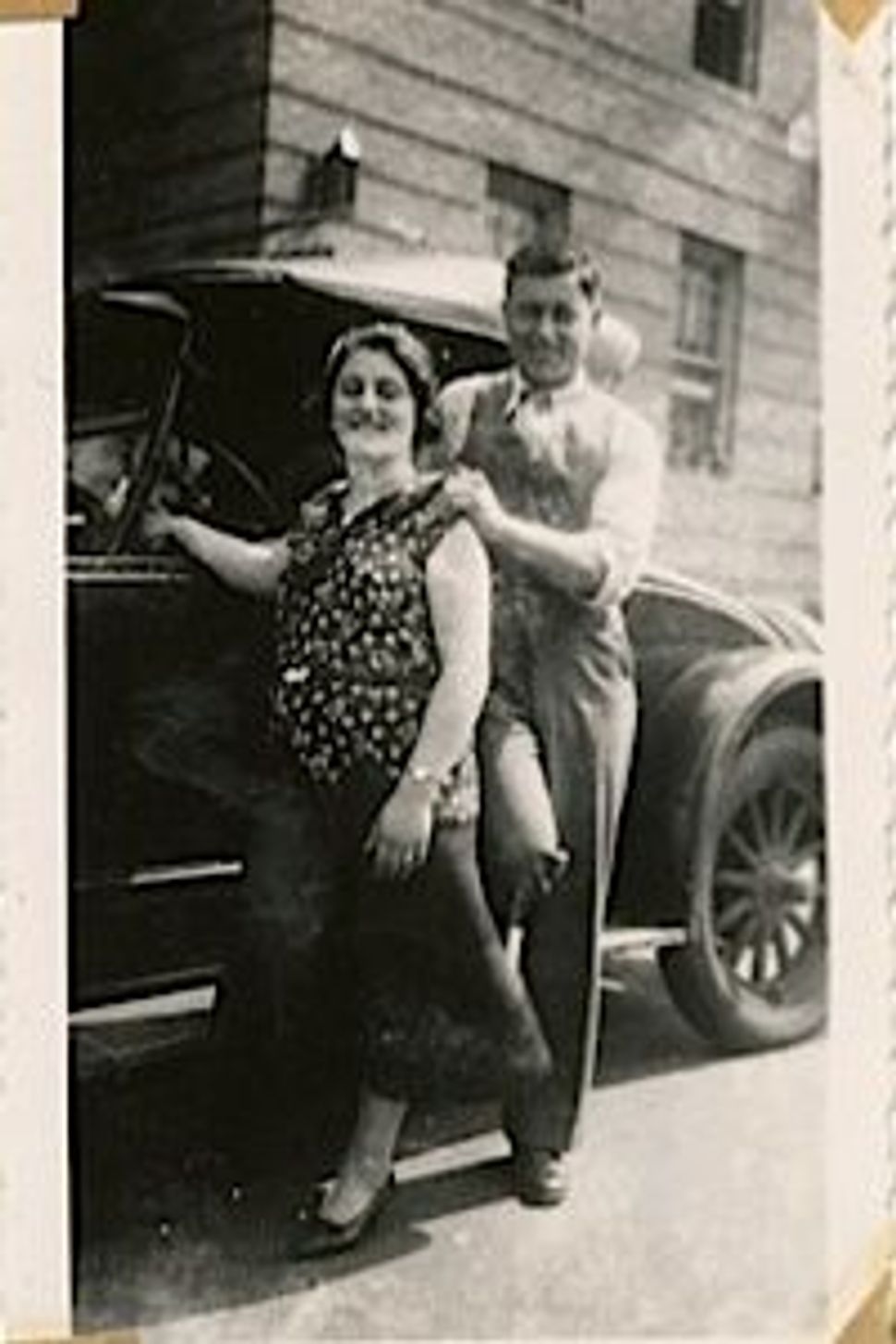 Courtesy of Alan Moskowitz Image by Virginia Sarfati Levy and Nissim Levy in the 1930’s.

This is such a hard and fast rule that when I got a letter asking me to help track down the origins of a long lost “Sephardic liver pie” recipe, I was utterly amazed, if not a little horrified.

“My grandmother Virginia usually served it at Thanksgiving,” wrote Alan Moskowitz, “and it was always referred to as stuffing.” Stuffing sounded so much more appealing than “liver pie,” and it did get me past my initial shock. The description was frankly mind-blowing, a cross between chopped liver on sourdough rye and mina, a light-textured, ground beef and matzah pie that’s as connected to the Ottoman Sephardic Passover meal as the Seder plate itself. He might as well have described a lasagna soufflé. Clearly this recipe was a deliberate fusion of the two cuisines.

Rye bread is an alien concept in Sephardic gastronomy, and though liver’s no stranger, it’s hardly anybody’s idea of holiday food; the traditional recipes are simple and straightforward, meant for mid-week meals. Ashkenazi chopped liver? That’s not reserved for holidays, either, though it’s never an unwelcome guest at a party. But mina is strictly for Passover. To my Sephardic sensibility, the idea of tampering with a perfect, classic recipe – with chopped liver and rye, no less! – bordered on sacrilege. How had an emblematic Sephardic Passover pie morphed into a Thanksgiving stuffing with an Ashkenazi accent?

If I was going to reconstruct this recipe, I’d have to be convinced of the conditions that inspired it. Anyone who’d known the back story was long gone, but my own family experience pointed to the probable answers.

Virginia Sarfati’s story is typical of twentieth-century Ottoman-Sephardic women. From Istanbul and Edirne, Turkey, she was young and talented when she arrived in New York in the 1920’s from Paris, where she’d worked sewing models’ costumes for a couturier. In New York she married Nissim Levy, and they made their home among the Sephardim on the Grand Concourse. Nissim worked the grill in a Harlem bar for many years, but at home, Ginny’s Sephardic cooking – Mediterranean food – was always the standard fare.

Any guest in a Sephardic home soon learns it’s as impolite to refuse food as it is not to be offered any in the first place; you’ve got to eat it. However, your host will be mortified if you don’t like what’s served! In my childhood, my mother prepared Sephardic food or Ashkenazi depending upon who was coming to visit; to lessen the possibility of embarrassment – her guests’ or her own – she accommodated all tastes with painstaking forethought. My parents’ friends were gracious, and my mother a very good cook; they would have eaten anything she served. But that wasn’t the point. All guests are to be made to feel at once special and like members of the family – it’s a fundamental of Sephardic hospitality.

Surely it was a mixed marriage like my parents’ that sparked the invention. Virginia’s daughter married a Moskowitz, and Mamma was happy. How easy to picture her in her 1950’s kitchen, planning that first Thanksgiving with her new Ashkenazi in-laws and suddenly receiving a brilliant flash of inspiration.

Thanksgiving and Passover share two themes: gratitude for surviving great hardship, and a welcoming table. Who hasn’t ever offered a shorthand description of Passover as a “Jewish Thanksgiving”? No doubt, when Virginia was newly arrived in the U.S., another Jewish immigrant who saw things the other way around — Nissim, maybe? — described Thanksgiving to her as an “American Passover.” In keeping with the spirit of the Jewish holiday she knew, she adapted its most emblematic dish to celebrate the similar day she discovered in America.

With expert sensibility (liver pie turns out to be delicious), Virginia designed a perfect mixed marriage of her own not from two cultures, but from three, in a generous spirit — so right on this holiday — that was welcoming to all. And that ain’t chopped liver.

Ingredients for a 9-inch baking dish

Prepare the raw liver: Slide a sharp knife under the outer membrane to separate it from the liver, and peel it off. Place the liver in a ceramic or glass dish and pour lemon juice on both sides. Let rest 40 minutes, which should be sufficient time to extract the blood. Rinse, pat dry, and cut the liver into small dice. If there are still traces of blood, repeat the process using fresh lemon juice. This step will also tenderize the texture and eliminate any bitterness.

Heat 1/3 cup olive oil in a 3-quart saucepan over medium heat. Sauté the chopped onions until they are light golden. Do not let them brown, which will turn them bitter. Remove the onions with a slotted spoon and set them aside.

Add the liver a little at a time to the same pot, stirring to coat with oil. Reduce the flame to medium low, and cook through without letting the meat dry out. When the liver is cooked, set it aside to cool slightly. Mince on a wooden board or in a wooden bowl with a chopping blade.

Return the minced liver to the pot, mix in the onions plus the water or chicken broth, season with the cinnamon, a few grindings of black pepper and salt to taste. Cover the pot and simmer over low heat until the liquid is absorbed, about fifteen to twenty minutes. There should still be some oil left in the pot.

Set the pot aside to cool slightly, mix in chopped parsley (if using) and chopped toasted walnuts. Correct seasonings.

Preheat oven to 325°F. Oil the bottom and sides of a nine-inch glass or ceramic baking dish. Trim crusts from the bread, and arrange the slices in the baking dish in one layer. If there are any gaps, cut more bread to fill them in. Pour in just enough warm water or chicken broth to moisten the bread thoroughly.

Break two eggs one at a time right into the liver filling, blending each in with a few brisk strokes of a wooden spoon.

Brush the moistened bread with a light coating of beaten egg, spread the filling evenly on top of that, and brush the top lightly with the remaining beaten egg, without letting it pool.

Bake 20-25 minutes. Let the cooked pie rest several hours or overnight, refrigerated, to allow the flavors to develop. Serve warm, cold, or at room temperature, cut into squares or wedges. The recipe can be doubled without any special adjustments.

Janet Amateau is a food historian and consulting chef who writes about Sephardic food. Read her blog at SephardicFood.com