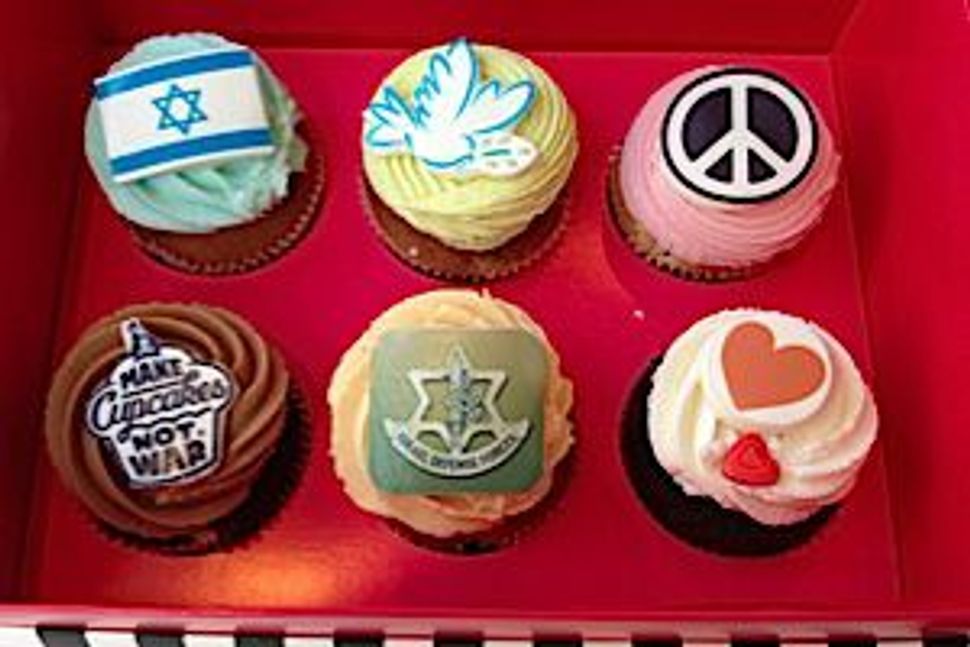 The atmosphere in Tel Aviv last week, as residents ran to bomb shelters in response to incoming missile warning sirens, was far from pleasant. So Danielle Levy, proprietor of I Love Cupcakes, did her part to try to lighten the tense mood that had settled over the city by offering her customers some Operation Pillar of Defense themed cupcakes.

“It was hard to live in Tel Aviv last week,” Levy told The Forward. “Everyone was very stressed. It was a big shock for everybody.” A few people had asked her to make cupcakes with army-themed decorations like little helmets, uniforms, and boots. However, she decided to go in a different direction and decorate her cupcakes in a way that would “make people smile, brighten their day.” The little doves, hearts, peace signs, Israeli flags and IDF insignia decorations were a gesture of moral support to the citizens and army of Israel. She even topped some cupcakes with miniature “Make cupcakes not war” signs.

Cupcakes are usually celebratory, but with people cancelling parties and get-togethers during the war, customers were likely picking up a box of six for NIS 96 ($25) and nervously snacking on them in between sirens, or even in the bomb shelter.

Levy, a 29-year-old Manchester native who had worked in television in London, decided to focus on her passion for creative baking when she moved to Israel five years ago. While there are other cupcake businesses in Tel Aviv, Levy claims to be the first to bring the cupcake craze to Israel.

She started I Love Cupcakes as a home-based business in Tel Aviv together with a South African friend she met in her Hebrew language class following her arrival to the country. When her friend left the business in summer 2009, Levy continued on and opened a store on Ben Yehuda St. in February 2010. She offers 10 different high-end flavors, all of which are kosher. Among the most popular are Oreo (Oreo cake with Oreo frosting topped with an Oreo cookie) and Nutella (hazelnut cake topped with vanilla frosting and real Nutella).

“Not everyone knew what cupcakes were,” Levy, author of a recently published book titled [“Cupcake Cakes,”][3] said about her starting out. “It’s been a really challenging three years, but I’ve really enjoyed it.” Her customer base has grown from homesick “Anglo” immigrants to native Israelis.

“There are great desserts in Israel, but all cakes here tend to be traditional and classic,” Levy explained. “If you want something fun and personalized, there is not a lot of choice.” For that reason it seems cupcakes have caught on. It also doesn’t hurt that Israelis, with their reputation as world travelers, have tasted cupcakes abroad and are happy to also find them at home.

With the ceasefire between Israel and Hamas in place, there will hopefully be no more missiles flying through the air. But Levy’s cupcakes will likely continue to fly off the baking rack as she moves to a larger store on Dizengoff St. next month