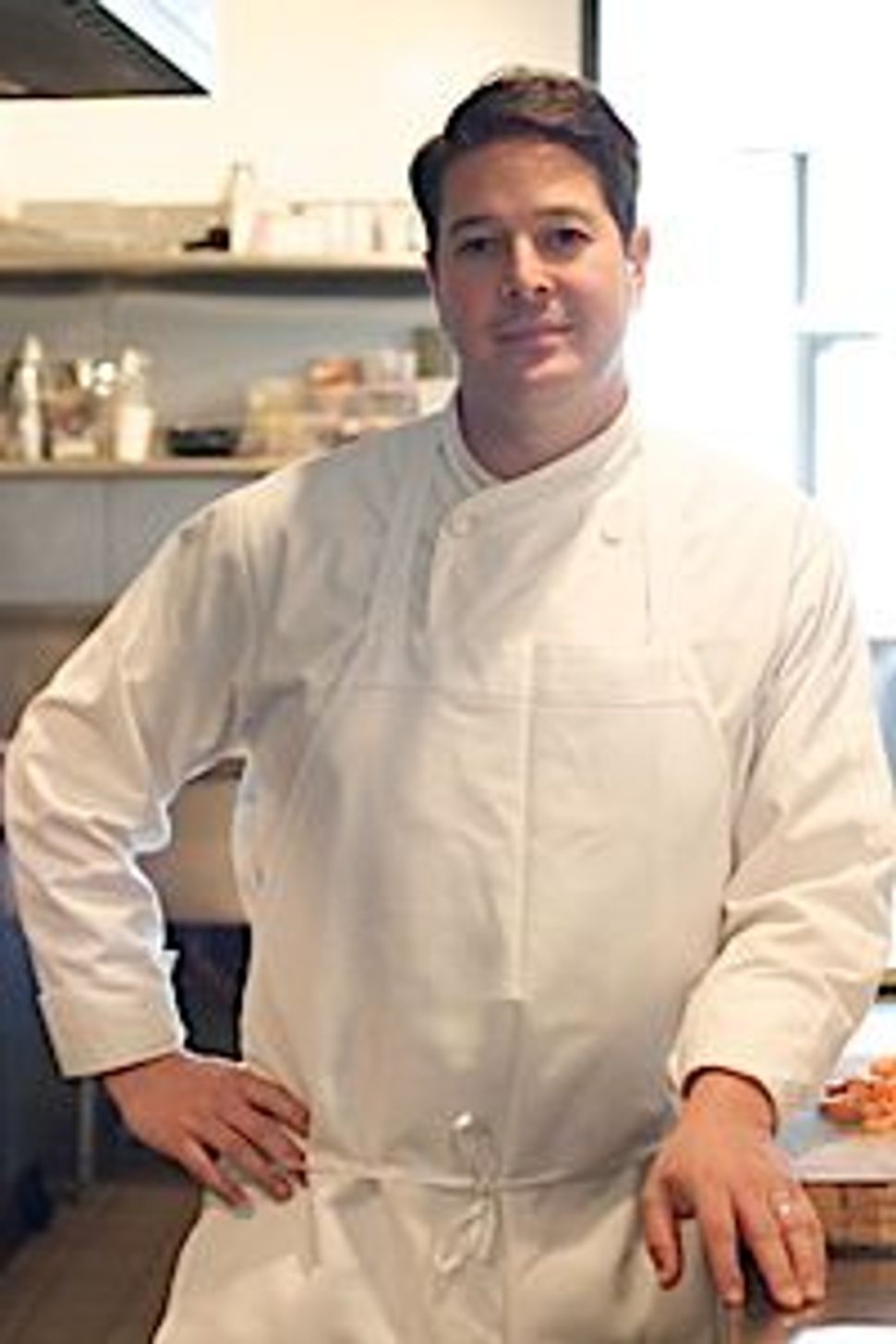 This is how they’re doing matzo ball soup in San Francisco this year:

First, get an overnight delivery of wood pigeon flown in fresh from Scotland. Actually, first make sure the birds were shot in the wild. With tiny buckshot pellets. Then slow poach the breast meat in a sweet, salty brine. Give it a crust of black pepper and coriander.

For the broth, make it using the pigeon bones, then reduce it by half to make it oh-so rich. As for the matzo balls, construct them with homemade matzo, fresh local eggs, toasted caraway seeds and a touch of soda water.

And there you have it: “Wood pigeon pastrami with caraway dumplings in a double consommé” — or, as chef David Bazirgan calls it, “my take on matzo ball soup.”

It’s just one of the seven interesting dishes that will be on the tasting menu Dec. 5 at the “Modern Jewish” dinner, part of the Holiday Guest Chef Series at the esteemed Fifth Floor restaurant in San Francisco’s Hotel Palomar.

Over the span of five nights, five highly regarded local chefs have been invited to pay homage to the cuisine and the holiday traditions of their heritage in a single dinner. As the host, Bazirgan, the executive chef at the Fifth Floor, gets to create and prepare a few of the dishes himself (such as the matzo ball soup).

The second annual event runs from Dec. 4 to 8 and includes Hawaiian, Moroccan, German and Italian in addition to “Modern Jewish.” Each costs $125 per seat, with an extra $75 for wine pairings.

The lineup is a bit different from last year, but both years have included a Jewish meal. “I’m just looking to have a nice, diverse mix,” was all Bazirgan, who isn’t Jewish himself, would say when pressed as to why he is 2-for-2 in the Jewish department.

The Jewish chef this year is Jason Fox, the executive chef at Commonwealth, a seasonal, progressive, 2-year-old American restaurant in San Francisco’s hip Mission District. Fox, who has been in San Francisco 17 of his 39 years, had a Conservative Jewish upbringing in Marlboro, N.J., and says his menu for the Jewish dinner is inspired by “a combination of stuff I remember having and things I associate with Jewish cooking.”

He particularly remembers his mom’s traditional brisket, and he’s offering a “touch more refined version” in this dish for the dinner: veal breast, Jerusalem artichokes, leeks and carrots. “The Jerusalem artichoke is just a play on words, really,” Fox says. “But it is one of my favorite vegetables in the winter.”

Fox also grew up eating a lot of beets, so he’ll be starting the meal with something that will combine beets, walnuts and yogurt. “They’re good complementary flavors, but I’m still playing around with the textures,” he says, noting the dish will likely be in the form of a canapé or “a little cake.”

He and Bazirgan will alternate dishes throughout the seven courses. Bazirgan’s first will be smoked salmon with salmon roe on a piece of rye (either a cracker or hard bread) with horseradish. “The goal is to start with some familiar flavors and tweak them a little bit, play around with textures and different ways of delivering them,” Bazirgan says of the concept of not just the Jewish meal, but the entire series.

One dish will be a pâté of quail, black truffle, duck liver and perhaps a bit of chicken, adorned with a Manischewitz geleé — “Probably Concord Grape, I’d imagine,” Fox says when queried on the matter — and a dab of purple mustard from France.

Since Hanukkah is right around the corner, one menu item is listed as “Potato Latkes in a Modern style.” It will be served with some sort of compote of chopped chicken liver, apple and red onion, but Fox is reticent to reveal much — either about the consistency or even the shape of these “modern” potato pancakes.

“Everything is a little re-imagined,” he says. “Really, I’m still working on it. Plus, we’re looking for the surprise element. We want people to come and taste it, and have memories about the latkes they ate growing up, and then compare it to something that’s different but still delicious.”

For dessert, the menu reveals an almond blintz with cranberry, crème fraiche and Meyer lemon.

“The Jewish dinner was a big hit last year, and we’re just trying to build upon everything this year,” Bazirgan says. “I’m glad to have Jason involved. He’s a very unique chef.”

“I’m just looking for a lot of diversity — both among the chefs and within the different dinners,” Bazirgan says. “This year it works out that every chef is completely different. Each one is all over the place.”

Bazirgan notes that some or perhaps all of the dishes will be available a la carte without having to purchase the entire tasting menu, but those offerings will be based on availability. Also, he adds, some of the proceeds will go to a charity, Meals on Wheels. For more information on the second annual Holiday Guest Chef Series, visit http://www.fifthfloorrestaurant.com or call (415) 348-1555.