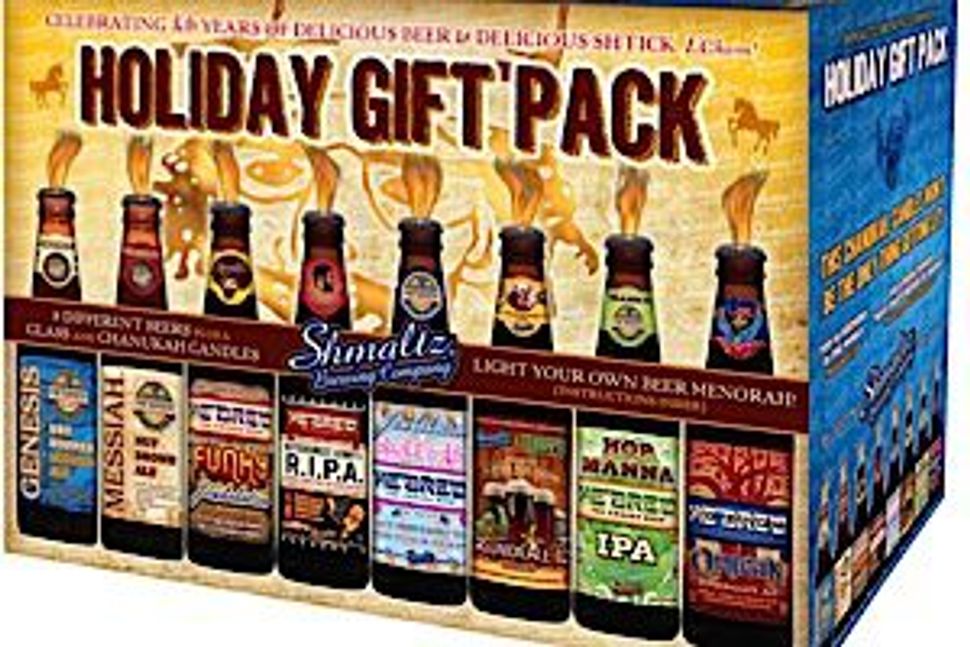 With dancing rabbis, clowns, and unicorns adorning their bottles, and names like Genesis Ale and Funky Jewbelation, Shmaltz Brewing Company’s He’Brew beer commands the attention of the liquor store browser — myself included.

The little-engine-that-could brewing company has made big waves over the past 16 years. Starting as an inside joke between Southern Californian friends, the brewing company, which celebrates “delicious beer and delicious shtick,” now has products on the shelves of 31 states. And its beer, brewed in Saratoga Springs, has won worldwide acclaim.

And so, I gathered some fellow beer connoisseurs and foodies in order to judge how good this He’brew beer actually was. Lucky for us, Shmaltz’s Holiday Gift Pack just hit store shelves, and includes eight diverse varieties of their wildly different craft brews.

The results? Delight. These brews are fun, distinctive, flavorful, clever and generally enjoyable to drink. The packs are expensive, from $25 to $30 depending on the store, but worth it. And so, with the opinions and insights of my overly opinionated sensitively-beer-tongued-friends, I provide you with a guide for enjoying each beer to its fullest flavor potential.

Most Delicious: Reunion Ale ’12, A Beer for Hope
Brewed with cocoa nibs and cinnamon, the Reunion Ale is truly the quintessential Hanukkah beer. The sweet complexity, the refreshing lightness, the dark rosy color all hearken back to the delicious root beers of my youth, but with a stormy and delectably alcoholic edge. Serve up some jelly donuts, crack the top, inhale the sweetness and enjoy.

Most Intense: Jewbelation Sweet 16
The sensation of drinking Jewbelation Sweet 16, which boasts of 16 malts, 16 hops, and 16% alcohol content, is similar to that of eating pop rocks—from the moment the smell hits your nostrils until the last dregs of libation have made their way safely into your abdomen, the flavors of this beer continually change. Thirty two flavors, to be exact. Most detectable are the strong caramel and toffee undertones, and its overwhelmingly hoppy finish. “I split a 12 oz. bottle with a friend, and man, you can really feel it,” Shmaltz’s proprietor Jeremy Cowen told the Forward. “It’s a dangerous beer, so I recommend savoring it with friends.” Indeed.

Best Latke Beer: Bittersweet Lenny’s R.I.P.A
Brewed as a tribute to Lenny Bruce, this Double India Pale Ale is surprisingly approachable. A deep amber color, Lenny’s R.I.P.A is rich, warm, and about half as bitter as I expected it to be. The rye malt flavor is deep and complicated, lending the honeyed brew a nice woodsy flavor. I would pair this bad boy with meat and latkes.

Best Beer To Drink While Chatting With Your Grandma: Messiah Nut Brown Ale
If the warm reddish-brown color of this tasty ale doesn’t convince you to drink it, then the tastes sure will. A nutty brown ale, the Messiah has a soft and creamy mouthfeel, and a malty smooth finish. Undertones of chocolate will constantly keep your palette amused.

Funky Jewbelation
Dark and thick, Funky J tastes shockingly sweet, and incredibly funky. This malty brew has a slightly syrupy finish, so I would recommend sipping it slowly with a friend. Or make a beer float with it, if you’re feeling lucky.

Genesis: Dry Hopped Session Ale
The Genesis is smooth and light — with a tangy bitter finish that supplants its early sweetness. A constellation of simple flavors and a sweet apple-y aroma lend this soft beer a deliciously subtle punch.

Origin: Pomegranate Ale
Don’t be fooled by the pomegranate brewed into this Imperior Amber Ale — for sweet and fruity it is not. This beer is rich and simple, but a little heavy on the alcoholic finish.

Hop Manna
Hop Manna is a rich marigold color, and emits a deep citrusy aroma. Its bitterness does not disappoint, even while being tempered gently by undertones of honey and pine.