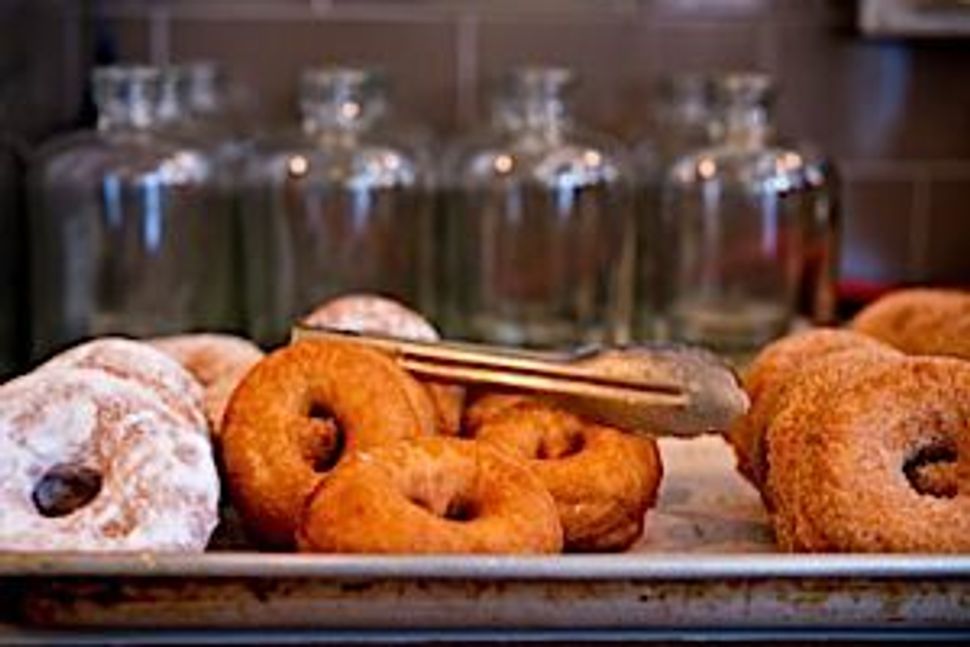 As winter slides in and makes itself comfy in New York for the next couple of months, locals are — as ever — on the lookout for interesting new edibles in the Hanukkah spirit, even as they pick up boxes of staunchly reliable latkes from Zabars and Russ & Daughters.

Thank goodness for 606 R&D — quite possibly the only hip new Brooklyn restaurant to be serving up a split powdered sugar donut and raspberry jam ‘sandwich’ in honor of the holiday. Not to mention a special potato pancake appetizer served with a dollop of creme fraiche and a slaw of beet, apple and celery root. And while these are definitely special holiday items, stop by 606 R&D year-round for delicious classic cake donuts (inspired by Dreesen’s Famous Donuts in the Hamptons and made by a Kickstarter-funded donut robot) and some extremely tasty latke cousins (try the carrot parsnip pancakes or the cauliflower pakoras).

So what’s the story behind the marriage of such inventive culinary whimsy with such old world Brooklyn Jewish sensibilities?

Well, it begins with Ilene Rosen and Sara Dima, both alums of New York’s famous City Bakery. The two partnered up and opened 606 R&D last January, their shared goal being quite simple: to create a neighborhood culinary institution true to the things they loved. As Rosen told one interviewer: “We wanted to do exactly what we wanted to do, exactly the way we wanted to do it, and we believed that if we did it that way, other people would like it too.” And they were right — the homey neighborhood spot is a magnet for people who already know it well for its charm, its ever-evolving seasonal menu and its offbeat takes on traditional — and often Jewish — comfort food.

On the persistent presence of Jewish nostalgia in her menu, Rosen says: “It’s just personal.” She brings what she loves into what she cooks and serves, and part of that happens to be a byproduct of growing up in Jewish Brooklyn. So she traces the Jewish influences on her culinary creations all the way back to her “first foray into solid food.”

It’s not surprising, then, that Rosen’s interpretive Jewish fare transcends a Hanukkah special here and there. Take, for example, the chopped chicken liver on celery (the direct result of a much-loved junior high school snack), or The Romanian (a beety twist on the Bloody Mary and a tribute to the jar of borscht Rosen’s grandparents consistently kept in the fridge). There’s the famous ‘horse and pig’ sandwich (a proudly secular wedding of horseradish and bacon on hearty sourdough bread), a succulent brisket with kasha, and the occasional chicken in the pot with matzo balls for Sunday Supper. Not to mention the famous Smoked Fish Festival for Two (available for brunch) — smoked salmon, baked salmon, smoked trout, herring in wine sauce, whitefish salad, bagels and cream cheese, guaranteed to do your date or your hungry Jewish grandmother proud.

“The whole place is personal, the food being only one aspect of that,” says Rosen. And it’s funny, there’s something about the fact that 606 R&D is so many things — storefront, deli, market, counter, bar and neighborhood gathering place — all at once that is ever so slightly reminiscent of New York Jewish dairy or deli counter culture, if a good bit shinier. Sure, the décor is deeply tasteful and truly Brooklyn chic — simple wooden tables, mismatched floral china, jars of wildflowers and glass milk bottles from another time — but given their context and the care the owners have so evidently put into making their customers feel at home, there’s also something deeply heimishe about it all. After all, to walk into the joint on a Sunday night is to see a hearty bustle of people crowded around the candlelit tables and bar talking, interrupting, sharing heaping plates of fanciful comfort food crowded, bumping elbows and, if they know what’s good for them — finishing the evening off with a grilled donut topped with ricotta, honey and thyme.