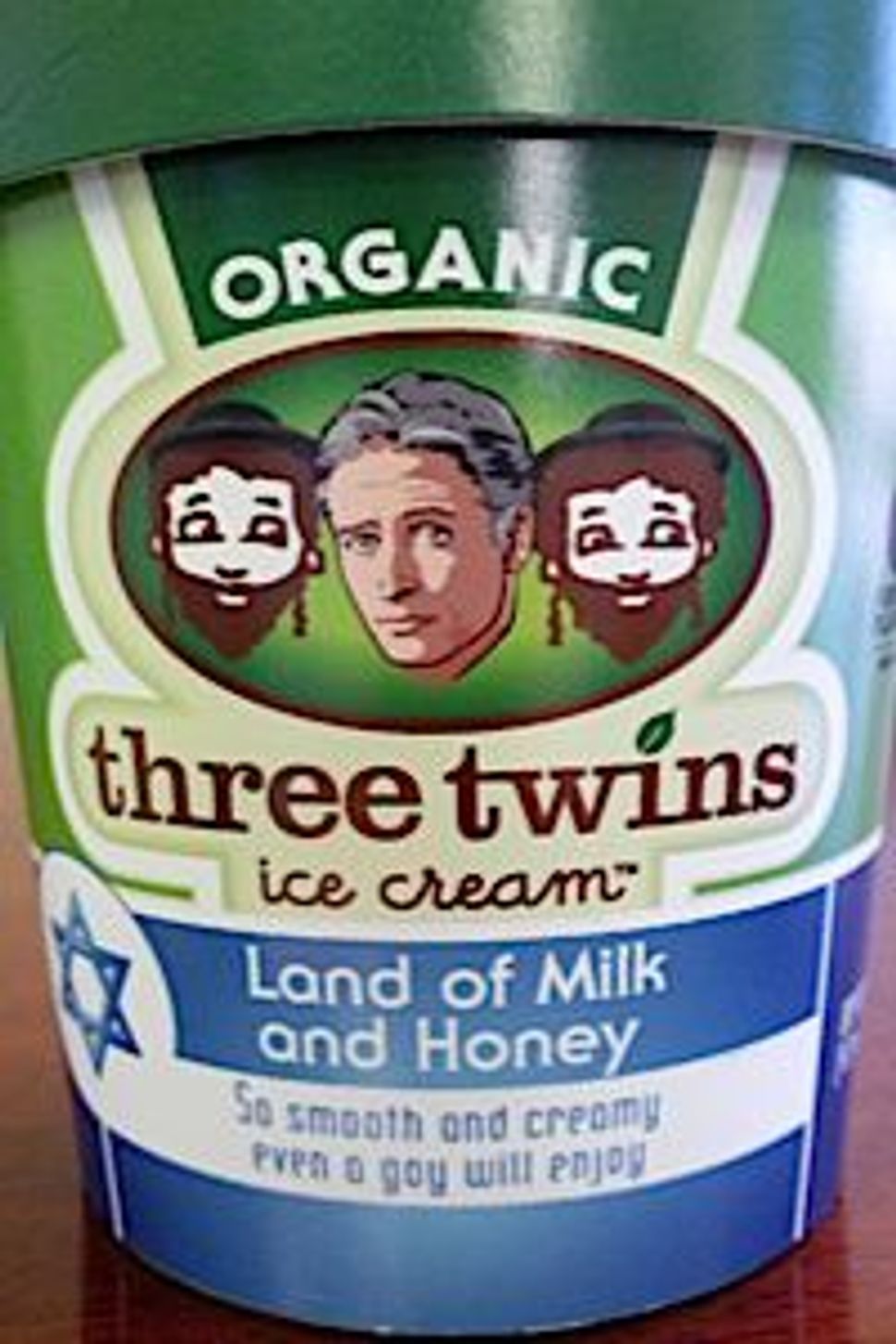 Stephen Colbert inspired Ben & Jerry’s “AmeriCone Dream” ice cream, and the company named its “Late Night Snack” flavor for Jimmy Fallon. So, Neal Gottlieb thought it was time for that other late night funnyman — Jon Stewart — to also have his own ice cream variety.

As it turned out, Gottlieb was better positioned than most people to do something about this. As “founding twin” of the Northern California-based Three Twins organic ice cream company, he was able to whip up some flavors he thought might please Stewart’s palate.

This was exactly two years ago at Hanukkah time, and Gottlieb was thinking Jewish. He came up with three original flavors for the Daily Show’s host to sample: “Land of Milk and Honey” (So smooth and creamy even a goy will enjoy); “Carl’s Kugel” (Oy vey! cream cheese, cinnamon, apple sauce and golden raisins!); and “8 Crazy Nights” (Sweet potato latke ice cream with Hanukkah gelt).

Gottlieb did a very limited run of specially designed pint containers. The female “twin” in the center of the company’s logo was replaced with Stewart’s likeness, and the male “twins” on either side gained beards, black hats and peyes.

Gottlieb sent the three varieties off to the comedian on the first night of Hanukkah 2010, but to date has received no reply. However, he is not discouraged. “My sources close to Stewart told me that he remarked that the ice cream was the nicest thing anyone had ever done for him.”

“We were really hoping — and are still hoping — that Jon Stewart will allow us to license his name and likeness for a special flavor of our ice cream,” Gottlieb, 35, told The Forward in a phone interview. With tweets about the Land of Milk and Honey flavor coming from the company earlier this week, the comedic flavor is still clearly on their minds.

Gottlieb started Three Twins (named for him, his twin brother Carl — for whom the kugel flavor ice cream is named — and Carl’s wife Liz) in 2005 as a single scoop shop in San Rafael, Calif.. Gottlieb calls his product “inconceivably delicious organic ice cream,” and it is made from high quality ingredients and dairy sourced from within 17 miles of the company’s factory in Petaluma, which opened in 2010. Three Twins now has 50 employees and sells its 13 packaged flavors (Sea Salted Caramel is the biggest seller) for $4.49 per pint nationwide.

“I’m still waiting by the phone,” Gottlieb said about his ongoing hope that Stewart might yet come around on the idea of lending his name to a Three Twins ice cream flavor. He is thinks the partnership would be a great opportunity for the company to support a non-profit of the comedian’s choosing.

“I’ve been staring at these containers with Jon Stewart’s face on them for two years,” he said. “It’s time to try again to get his attention.”