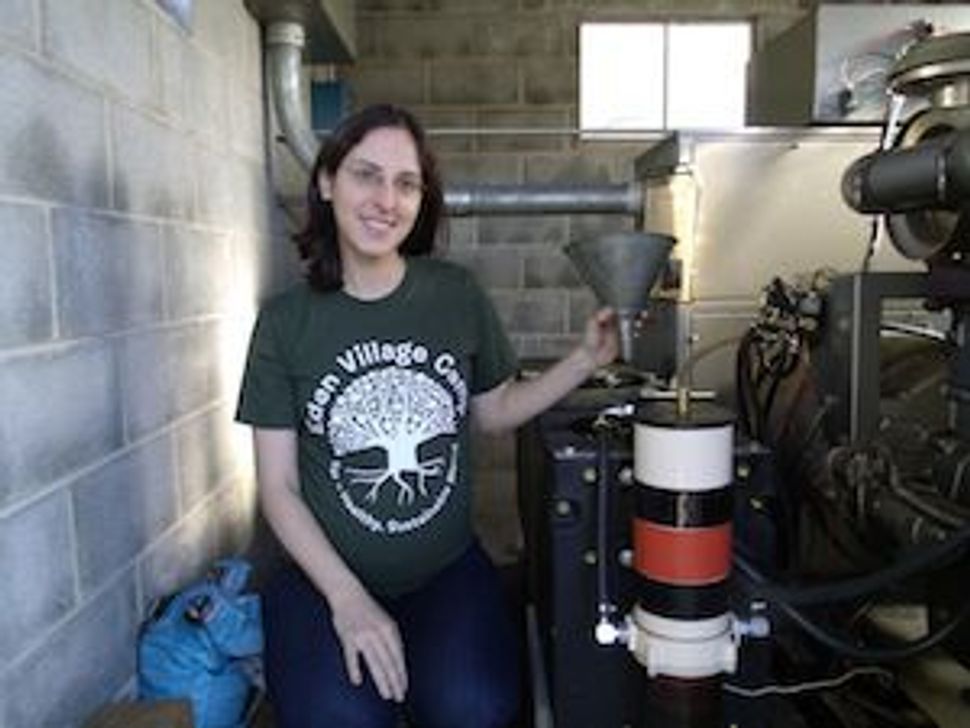 Its first test came this past summer, on July 15, 2012, when a big storm hit. The 200 campers and staff were confined to the dining hall until the storm passed. After a thunder crash, the electricity went out, and the campers let out a collective howl in the dark. A moment later, the camp could hear the hum of its backup generator starting up, and the lights returned – and the air was soon filled with a slight scent of French fries. That is the trademark scent of a generator powered by waste veggie oil!

Director Yoni Stadlin announced to the dining room full of campers that they were the first camp to “run on garbage”, and invited campers to realize that major systemic changes often start with small steps.

Most restaurants with deep fryers must pay to have their used grease taken away – while Eden Village is glad to pick it up and make electricity from it.

“We turned a problem into a solution. What’s more, our campers experienced that there is something beyond ‘reduce, reuse and recycle’ – we are rethinking!” says Stadlin.

The veggie-oil generator also powered Eden Village in the weeks after Hurricane Sandy.

As part of its celebration of Hannukah, Eden Village now seeks to convert its diesel maintenance truck to run on used vegetable oil as well. The ultimate aim, according to Stadlin, is to source all energy from renewable resources. Stadlin sees this as deepening the camp’s ethos of Jewishly-rooted farm-to-table living and kind community. Stadlin says, “Our work is to take our stories from the past, like the Chanukah story, and make them relevant today. The miracle of Chanukah is that limited oil lasted – and our human action helped bring about that miracle. The real miracle was the hard work the Maccabees did to reclaim their temple. Now, the temple that is our earth is being degraded – and it’s upon us to rededicate it!”

The choice to use waste veggie oil rather than limited fossil fuels can be seen as a way of bringing the Chanukah story to life in ever-more-important ways.

According to the Midrash, when Adam and Eve first toured the Garden of Eden, they received a stern warning: “Be mindful,” God said, “that you do not spoil and destroy my world. For if you spoil it, there will be no one after you to repair it.”

Recently, we have received more warnings, this time in the form of devastating weather. From drought across the Midwest to Super Storm Sandy, we have witnessed what many believe to be the consequences of our collective failure to care for the environment.

At the core of Eden Village is the rekindling of Jewish wisdom for our time, as Judaism provides not just warnings, but also valuable guidance on ways to care for and live in greater harmony with the earth. Campers draw inspiration from the Maccabees and even now, months away from their sleepaway camp experience, they are taking actions at home to live more lightly and harmoniously. Many are using Chanukah candles made of beeswax rather than paraffin; which is a petroleum product, buying fair-trade gelt, championing their schools’ “green teams” and more.

Stadlin says, “Eden Village is a summer camp, but it’s really about what our campers and teens take home with them for the rest of the year.”

A grant from the UJA-Federation of NY’s Jewish Greening Fellowship funded the generator conversion. The fellowship has also funded solar panels and rainwater catchment at Eden Village, and many other projects at other agencies to bring the Jewish communal world towards healthier, more sustainable living. In this most pressing and crucial realm, the call to serve as a “light unto the nations” has never been more compelling.