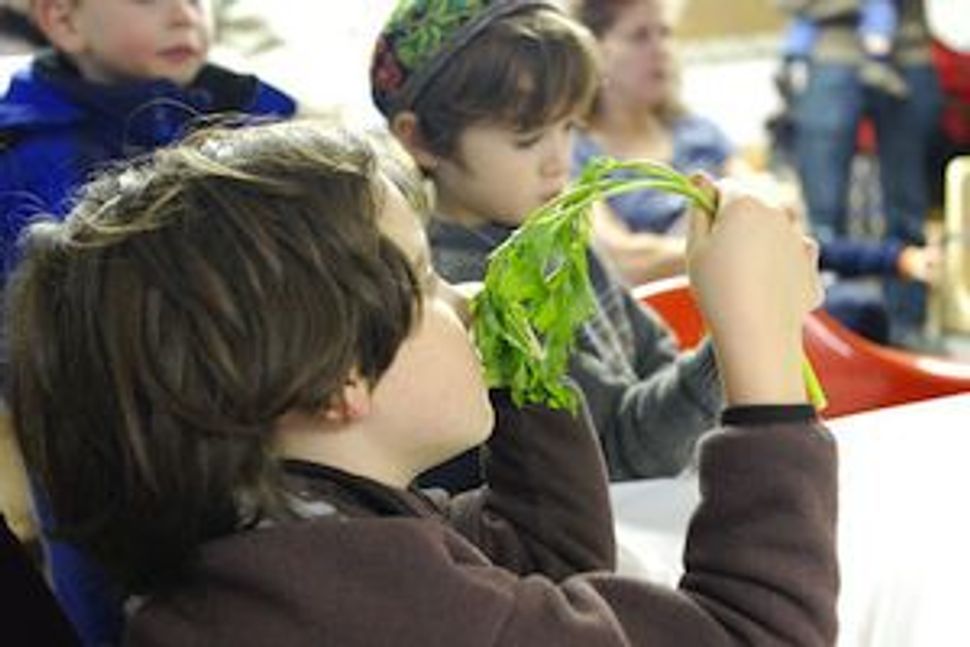 She finds that kids often use food as a way to assert the little bit of power they can find. Lantos always recommends (safely) involving your children in the cooking process. When she sees this power play, she recommends a couple of additional ways to help kids feel in control through their assistance in the kitchen.

Fist, give kids clearly defined tasks. For instance, they love to twist salt and pepper grinders. Just tell them how many times to twist and then they can count themselves – or you can help them count. A similar idea is to put something like half a cup of oil in a small squeeze bottle and then count how many squeezes it takes to empty it into the mixing bowl. Or put your vinegar into a small squeeze bottle and tell them how many squeezes for each recipe.

Second, there are easy ways to empower your kids with choices. Ask them what color pepper they want in the salad or what shape to cut the cucumbers.

Kids are mostly only exposed to sweet, salty and fatty because they are the building blocks of fast food and processed food. Even supposedly healthy processed snacks can be higher in salt than necessary. Intense sweet and salty can prevent us from tasting more nuanced flavors.

When Lantos cooks with families, she tells kids that they have a very important job. They are going to be super honest taste tasters. But they have to be helpful by telling the cook if the dish is too salty, too sour, sweet, etc… or if it needs more of something. It doesn’t help the cook to say “I like it,” or “I don’t like it.” The taster’s job is to give the cook specific direction to improve the dish. You can help kids explain this to you by first identifying these different types of tastes.

All children have certain foods they won’t eat and don’t like – even if they haven’t tried them before. According to Lantos, it’s helpful to establish some ground rules around tasting that takes out the yuck or yum factor.

First, repetitive exposure with no pressure takes away the power play. Give them three fruits/veggies/herbs and ask which one they want to try. Not if, but which.

Second, tell your kids that sometimes people have to taste something 6 or 7 times before their tongue knows if it likes it or not. Say, “Stick out your tongue and see the tiny dots. Those are taste buds. It’s the first thing that touches and tastes your food. The taste buds send a message to the brain and tell the brain if it’s salty or sweet or sour. They change their tastes all the time so a certain type of food might taste different soon. In fact, it’s fun to see what your taste like on any particular day.”

Working against the constant onslaught of advertising for processed junk food – often aimed directly at children – and hearing someone say “make veggies fun!” makes some moms and dads want to stab the speaker with a fork!

These ideas may encourage you to put down that fork.

Carrot Tongues Take as big of a carrot as you can find and, depending upon the age of the child, either guide their hand, or let them peel one side of the carrot. Keep peeling until you’ve created a wide flat side to the carrot. How wide? Why, as wide as a tongue might be. Place the carrot over your own tongue and ape about – inviting your little one to try to talk and sing with the carrot tongue in their mouth. Ask your kids what they can do with their carrot tongues. Two options: Put them in salad and take a bag of them to school to share with friends.

Fun with Herbs “Show me pinching fingers…Now sprinkling fingers.” Tell your kids that big chefs don’t know how to do this but kids with little fingers do. They may have a hard time at the start, but they’ll get it and then they’ll enjoy spreading herbs over a dish – both to make the recipe and then decorate it at the end. When kids throw in herbs they’ve smelled and interacted with, there is a better chance they’ll eat the dish.

Natasha Rosenstock Nadel is a writer living in Potomac, MD with her husband, son and daughter. When she’s not blogging at www.healthyfamilyhealthyyou.com, she is trying to get her family to eat their veggies.