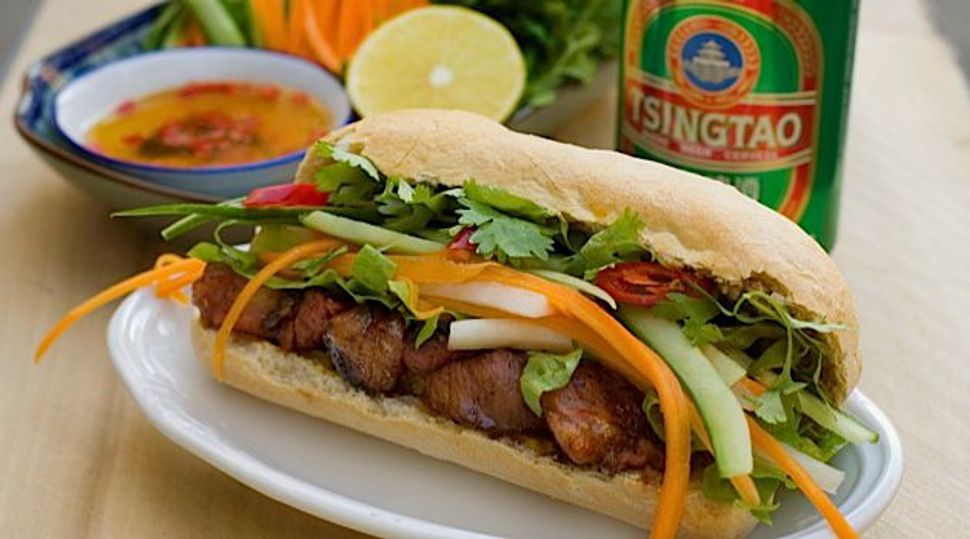 Flavors of the East: Tel Avivians can now snack on traditional Vietnamese bahn mi at the charming Hanoi Restaurant. Image by Hila Feller

Charred eggplant sashimi resting on a bed of local desert tomatoes? Crispy calamari that “dances” with yogurt and preserved lemons? Seared veal sweetbreads with Ethiopian tahini? No, thanks. Bring on the dim sum!

While Israeli food has come into its own as a delicious and distinct cuisine in the past decade, even the most patriotic Israeli eaters seem to have tired of the fashion of celebrating new Israeli cuisine with long, poetic menus that offer little more than variations on the same old Middle Eastern street food.

Diners have had too much tahini — they’re craving new flavors and techniques. The bold tastes of the Far East fit right into this culinary climate, and they have already started to make regular appearances on restaurant menus and in home kitchens around Tel Aviv.

For many years, when Tel Avivians craved an authentic, heartwarming meal with flavors from afar, they could only trust Thai House, a simple restaurant that opened its doors back in 1996. Today, at the charming spot Hanoi Restaurant, they can slurp Vietnamese pho or munch on banh mi — a sandwich of meat, chicken liver pâté, cilantro, chilies and shredded pickled vegetables, served on a fresh-baked baguette. Or, they can stop by newcomer The Bun, just outside the Carmel Market, for steamed tofu buns and fresh papaya salad.

At the homes of the city’s passionate and fashionable cooks, dim sum, small plates of Chinese treats, have become the dinner fare au courant — at least according to the stunning images circulating on Instagram. One can now also find these petite treats at specialty dim sum shops throughout the city.

Even at modern Israeli restaurants, Asian-inspired dishes are popping up on menus. At the popular restaurant Shulchan, “spring roll stuffed with grouper, avocado and fish sauce” has become a favorite. A modern version of the traditional Japanese ramen soup is also listed on the specials board.

A Tel Aviv Chinatown is still a distant dream, but it is a pretty safe bet that 2013 will be the year of the dragon in the steaming kitchens of Israel’s largest city.