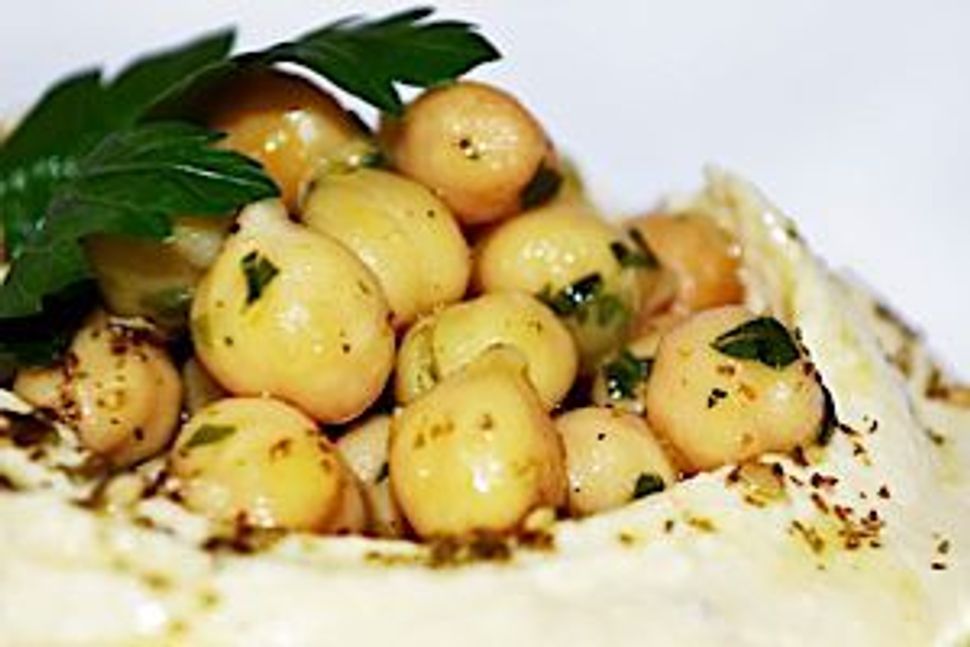 Image by Courtesy of Mezetto 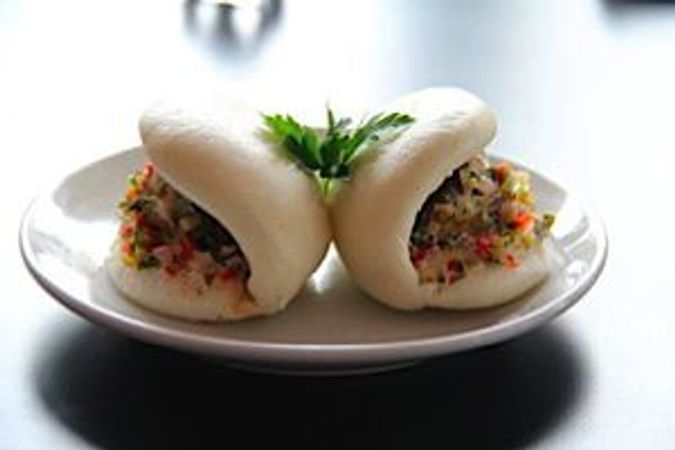 Image by Courtesy of Mezetto

Israeli-born Chef Shlomi Biton insists his Lower East Side hotspot Mezetto, which opened in October, is not a Middle Eastern or Jewish eatery. But its small plates — meze — bear those imprints, along with Balkan, Moroccan, and Sephardic flavors. Mezetto’s menu also reveals the influence of Biton’s rigorous studies at Le Cordon Bleu in Paris — and a stint in the high-precision kitchen of Spoon, Alain Ducasse’s Hong Kong fusion palace. Familiar ingredients surface in smart combinations, like a halvah parfait and falafel buns, his Asian-inspired, open steamed buns filled with a falafel ball, Israeli pickle salsa and harissa aioli.

While Biton still pines for his mother’s Moroccan cooking — and even consults her on food questions — he claims his goal is nothing less than “shattering” preconceptions of Mediterranean cuisine. The Forward caught up with Biton from Mezetto’s kitchen — and even shared his hummus recipe with us below.

How did growing up in Israel affect your palate and the way you cook now?

Growing up in Israel I was used to having lots of spicy food, offal and vegetables like eggplant, kohlrabi, fennel and such — ingredients that you don’t really see very often here. I think that those ingredients affected my cooking throughout the years. When I am cooking I am looking to be comforted by those flavors and textures that stuck with me from childhood.

How would you characterize your balance of tradition and reinvention? You present a lot of conventional ingredients in unfamiliar preparations.

Without the past there is no future. I am big on tradition and heritage in everything in life so when it comes to my cooking its all about awakening memories. Old-style Mediterranean has been done, and, to be honest, it’s kind of routine. So I am trying to take my game to a new level and have people realize that Mediterranean is not just kebab and falafel. I take traditional ingredients and give them a modern twist or combine them with other unique flavors.

Several NYC restaurants have opened in the past couple of years claiming to bring a new spin to Middle Eastern/Jewish influences, including Balaboosta and Jack’s Wife Freda. What’s different about Mezetto?

I wouldn’t identify us as being Middle Eastern or Jewish. I don’t want to be defined by my nationality. I truly believe that we are a mesh of the whole Mediterranean. I am trying to elevate Mediterranean cuisine with amazing fresh ingredients and French techniques. Everything I bring to the table at Mezetto is being made in-house, and I mean everything.

Do you think most diners have outdated ideas of what Middle Eastern cuisine can be – in other words, do they think it’s still just traditional falafel, couscous, and tabouleh?

I think most diners have outdated ideas of what Middle Eastern cuisine is. That is where most of my inner turmoil comes from. I want to invoke creativity and show them that something as simple as hummus or falafel can be done in a new fun manner. I consider Mezetto’s Cuisine “New Mediterranean,” I want to shatter what people think of Mediterranean cuisine, it can be so interesting and inventive, you just got to think outside the box.

Your mother was a chef. What was her specialty, and how did her cooking influence you?

I still dream about my mom’s cooking. I wish that I could go home right now and join her for dinner. I remember the house filled with the aroma of Moroccan spices. One of my all-time favorite dishes she made was a brain stew with cilantro, okra, and turmeric. She always worked with ingredients that I use, like za’atar [the Middle Eastern spice blend], halloumi cheese, chickpeas. She made me the person and chef I am today. My mom’s favorite part of the house was the kitchen. She gave me the flair and passion for cooking, she showed me the way. To date, when I have any food questions, she is my main source of information.

1) Selecting the chickpeas is very important. Look for smaller sized chickpeas (Persian or Lebanese) that possess a more vibrant yellow color. Even though chickpeas are a dry product, some stores allow the goods to sit for a long time. So older chickpeas will be brown in color.

2) Soak the chickpeas in water over night. When the chickpeas have grown to about twice their original size, they are ready to be cooked.

3) In a medium size pot, cook the chickpeas in the same water used during the soaking process (we don’t want to lose flavor). Add the baking soda and cook for about 90 minutes from boil or until soft (Different types of chickpeas require different cooking times). Be certain to taste them as they cook, when the crunch is gone or they are entirely soft, they are ready to be ground. Leave one cup of cooked chickpeas to the side to be used in the salsa that tops the Hummus. Make sure to grind the chickpeas (while still hot) with a minimum amount of water until completely smooth.

4) In a small pot, over medium heat, cook the eggs with 2 tbs of kosher salt until completely hard (the sodium from the salt makes the egg shells come off easily). This should take about 7 minutes from boil. Peel, grind to a paste and set aside.

6) To make the chickpea salsa, combine the remaining cooked chickpeas in a small mixing bowl with the minced garlic, chopped parsley, lemon juice, kosher salt and grounded black pepper (to taste). Mix well and serve atop the hummus plate, sprinkle za’atar spice over the dish and enjoy, best served warm with pita bread.