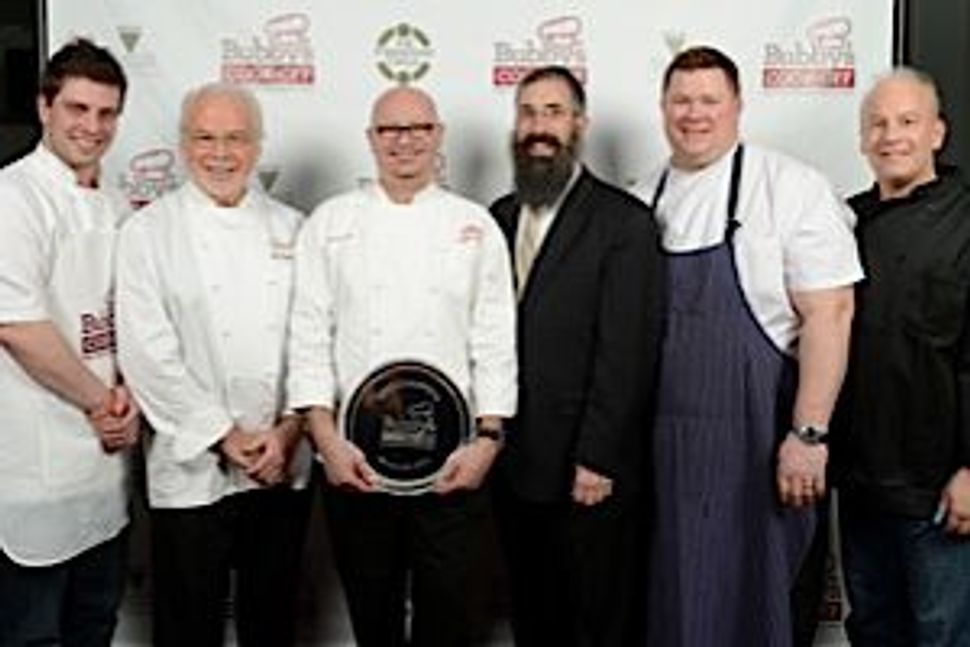 What would bubbe do? Infuse her matzo-ball soup with truffles and leeks? Prepare her brisket in red wine, then serve it on a puree of sweet potatoes, topped with pickled pearl onions and accompanied with a dollop of tzimmes?

Probably not. But she may have eaten it — after all, a meal’s a meal — and possibly even approved. (Or kept her reservations to herself.) One thing’s for certain: Bubbe, or most of the bubbes we know, would not have thought to make a hummus kawarma, a plate of ground chickpeas and little warm cubes of seasoned beef, all in a lemony sauce.

Yet that’s what won the prize last night in Philadelphia’s first-ever Bubby’s Cook-Off. The idea for the event came from Rabbi Yehuda Shemtov, who had the chutzpah to ask six local chefs — two of them James Beard winners — to each come up with a modern spin on traditional Jewish foods, and make the dish kosher and competitive. (Only one of the six chefs makes a living in a kosher kitchen.)

The winner, judged by five female Philly movers and shakers who are themselves a sort of Future Bubbes of America, was Guillermo Pernot, one of the James Beard chefs. His Cuba Libre Restaurant & Rum Bar is definitely not kosher but his kosher hummus dish was solidly Middle Eastern and in that neighborhood, as Jewish as it is Arab. His prize is glory and bragging rights, sufficient for a chef who participates in such competitions, and like the others, he was doing it mostly for charity, in any case.

Bubby’s Bake-Off, which drew about 200 tasters at $175 a head, benefitted the Lubavitch of suburban Bucks County and Philadelphia Friendship Circle, which provides a recreational and social organization for special-needs children and teenagers. The personable Rabbi Shemtov is at the helm of both. One of his honorees was a childhood friend, Ruben Amaro Jr., who is now the general manager of the Philadelphia Phillies. The two played baseball and other sports together after school in the Philly neighborhood where they were raised, and the reb “was a good athlete and a tough son-of-a-gun, too,” Amaro said.

The cook-off was held in an events space just outside Philly’s downtown, in a growing area of new restaurants. Three weeks ago, moshgiach David Kushner assembled the chefs for a rules-and-regs kosher session and this week, Kushner oversaw all the cooking at the events hall, kashered by Yehuda Sichel, executive chef of the region’s newest kosher restaurant, Citron and Rose, and his staff. Sichel was himself a competitor (his entry was a beef goulash knish in a vinaigrette prepared with lamb belly) and provided the bites at the cocktail hour.

The chefs and their staffs worked in the kitchen from 8 p.m. Tuesday night to 3 a.m. Wednesday morning, then returned six hours later to work until the event Wednesday evening. When it began at 5:30, the scene in the kitchen was quiet and intense. Pots were bubbling with liquids, cooks were prepping hundreds of little white plastic dishes with garnish. Each dish was matched with a different Israeli wine — Baron Herzog cabernet for Shane Cash’s above-mentioned red-wine braised brisket (“I wanted to prepare something that would bring back childhood memories tonight”); Old Vines zinfandel for Mike Deganis’ roasted lamb shoulder with red-onion jam; Herzog Russian River chardonnay for Jayson Grossberg’s gravlax-textured salmon (cool-baked, actually, for only 20 or so minutes in a 150-degree oven) that was served with greens, beets and pine nuts.

“It was a challenge to cook kosher, but I wasn’t really expecting it to be harder, and it wasn’t,” said Jean-Marie Lacroix, the other James Beard winner and chef-owner of one of the city’s most fashionably elegant restaurants, which bears his name. Lacroix’s chicken matzo dumpling, or quenelle, was fashioned from a French recipe and; Lacroix experimented, substituting matzo for flour and chicken fat for the crème that he normally would have put in a potato soup; the little subtly-flavored balls, floating in a sea of leeks, were a hit. “I learned something, cooking kosher,” said the veteran chef, smiling over the experience. “I always learn something new.”