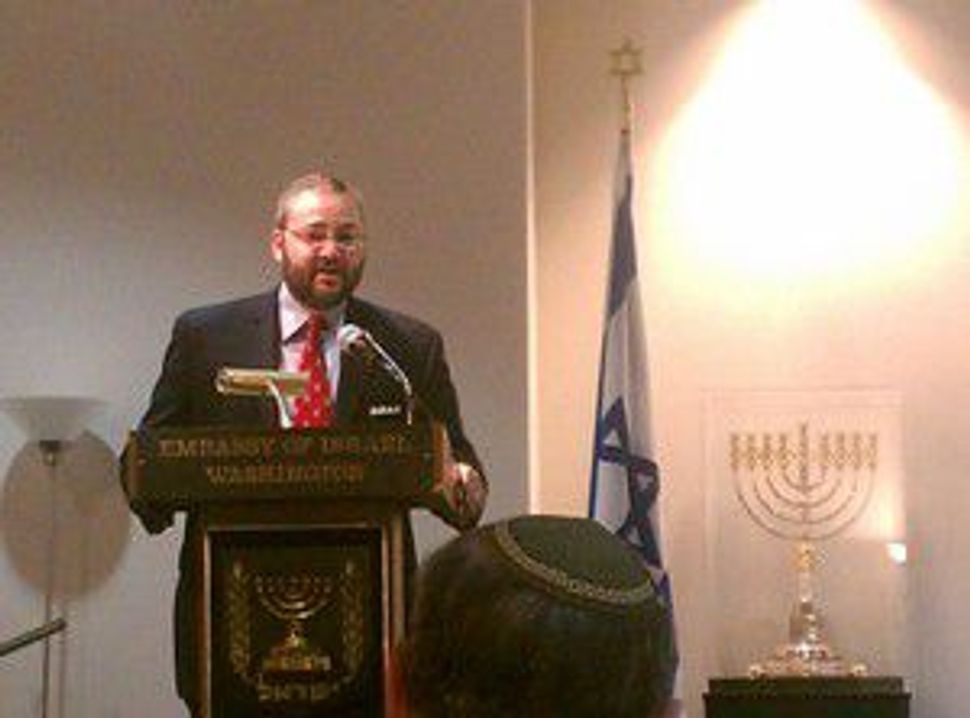 On Tuesday, I had an evening that would make the proverbial bubbie plotz (and with credit to my Bubbie, when I told her where I was, she kind of did). I left my Brooklyn apartment while it was still dark, and boarded the train from Penn Station to Washington DC, the sun was rising out the window. By noon, I was surrounded by a room full Jewish men; lawyers to be precise. The whole place was full of them, dressed in suits, making small talk. If you’re quiet, you can hear the sound of bubbie plotzing!

As it happens, this room full of Jewish lawyers happened to be about triple my age, and not exactly the eligible bachelor my Bubbie hoped for. I was invited to attend a fundraiser for the American Association of Jewish Lawyer and Jurists (AAJLJ), who were hosting a wine tasting at the Israeli embassy. After a very long board meeting earlier in the day, needless to say everyone was ready to relax a little bit.

The even began with an update from Noam Katz, the minister of Public Diplomacy, about the current state of Israel. If a 4-hour meeting isn’t enough to drive you to drink, hearing about the challenges Israel is facing with its neighbors might do the trick. The combination certainly will have you desperate for something mind-altering.

Following Katz’s speech about Iran as a threat to Israel and the “real” Israel-Palestinian conflict, Joshua London took the stage. Donning a kippah, London adjusted the microphone while servers passed out small glasses of wine. London is an accomplished drinker, who has written for a variety of publications about the wine and spirit industry. He is currently a wine and spirits columnist for the Washington Jewish Week. He has also written a book about the Barbary pirates.

He started by explaining the history of the Israeli wine industry. “Jews only wanted Kiddush wine,” he explained, and characterized as sweet and full of sugar. You know, the stuff that Sue Fishkoff describes in her book “Kosher Nation” as “the sticky-sweet bottle of Concord Grape Uncle Morrie has stashed away in the corner cupboard.” In the early part of the 20th century, Baron De Rothschild spent millions of dollars sending clippings to Israel from the finest vines of the most delicious grapes in the lushest parts of France. They even began to produce fairly good wine, until a plague of lice wiped out all of the crops.

Fast forwarding a couple decades, Israel in the 1980’s had only 3 major wine producers—and it seems that the citizens were content with that. The 1990’s, however, brought about what London called a “wine boutique revolution”. Dozens, maybe hundreds, of individuals and small vineyards started popping up all over the country totally revolutionizing the kosher wine industry. There are now over 250 wine producers, most of which are not kosher. 94% of the wine, London said, is supplied by the top ten producers like Herzog, Barkan, and Tishbi.

Following this wine revolution, the larger producers who are mostly in the Golan region, started to reinvest in the wine industry which has created the Israeli wine industry as we have it today. The last few years, London noted, have brought about the recognition from non-Jews who are saying that Israel is making really great wine. From a country that historically (maybe) boasted of grapes the size of grapefruits, it’s no surprise, remarked London, that when Israel finally decided to putting its mind to making wine that it should be really great wine.

I’ll admit that I hate being asked to bring wine to people for Shabbat dinner or other occasions. When faced with the wall of wines labeled “kosher” at my local wine store, after the hechser my eye is immediately drawn to the next most important (or perhaps more important label): the price tag. Tuesday was a very exciting day to get to experience truly high quality wine. First up (and actually the only one I was able to taste before I had to leave to catch my train home) was a snappy sauvignon blanc produced by Barkan winery. While we were sniffing and sipping, London told us that Barkan is the second largest in Israel, which means they produce between 8-10 million bottles a year. He told us that the wine we were enjoying was light, excellent for an apertif, had a high acid content, and was green. My personal preference is for red wine, but this was certainly delicious and a great way to end my day-long trip to DC.

Want to experience Israel for yourself? Join Hazon on the Israel Ride.

Liz Traison is a recent graduate of The University of Michigan where she received a BA in History and Judaic Studies. She also studied at Midreshet Lindenbaum and Hebrew University. She is thrilled to be a Program Fellow at Hazon and also to be doing social justice programming for MASA Alumni. She likes being outside, particularly on Skeleton Lake. And also being inside, specifically doing creative workshops in prison.