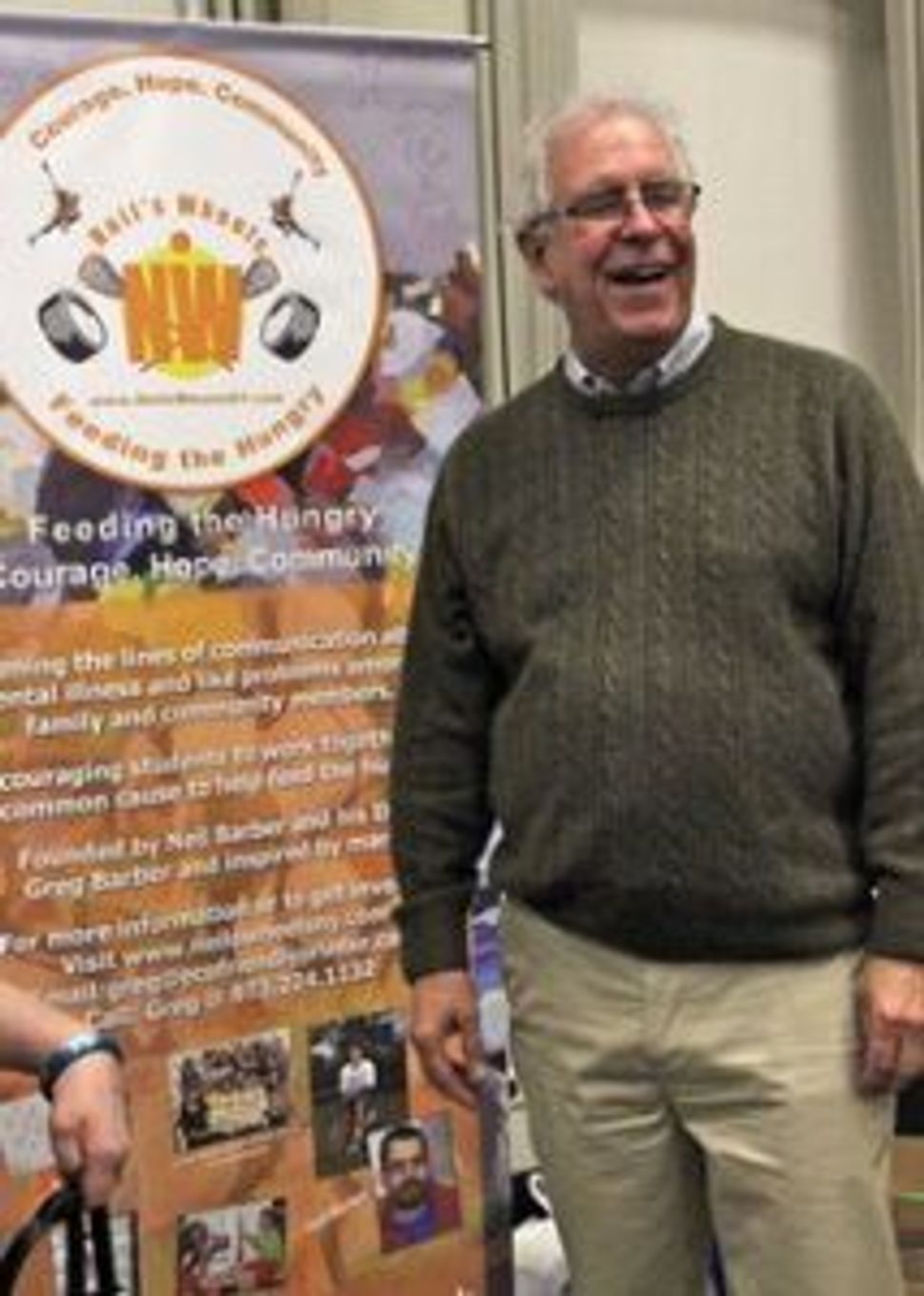 Greg Barber at a NAMI meeting Image by Janet Susin

As a high school student , my son, Neil, was diagnosed with mental illness. He lives with schizophrenia every day. As a student, he was an outstanding athlete at Manhasset High school. He excelled in lacrosse, basketball and track. But, starting in his junior year, things changed for Neil and for our entire family.

In the spring of his sophomore year, Neil was being recruited by several division 1 lacrosse schools. At the same time, he started exhibiting signs of mental illness. As his father, I couldn’t understand what I was seeing, and it pained me to watch his seemingly perfect life begin to unravel. Neil battled his mental illness for several years, and was hospitalized at North Shore Hospital in 1995. He escaped from their mental ward, and hitch-hiked 1,500 miles to Florida. We had no idea where he was until he showed up on my brother’s door steps. This is one example of what it means to live with a child with mental illness.

Eleven years later, all spent in and out of several hospitals, I reunited with Neil’s former lacrosse coach at a party. I informed Coach Rule of Neil’s diagnosis, and to my surprise he asked to visit Neil in the hospital. During his years in the hospital, Neil had very few visitors, and I was both shocked and honored that his coach wanted to visit him. During his visit, he said to my son, “you are a member of the lacrosse community, a respected member, and we will never forget you”. Coach Rule asked to share Neil’s story with his 7th and 8th grade classes. That was the beginning of a slow climb back for Neil.

The kids at Manhasset were so inspired by Neil’s story, and they asked their coach if they could send pastries to him and the other patients at the hospital for Thanksgiving. The hospital denied the request due to health concerns, and I was crushed. Neil did not often get support of the larger community. I asked if we could redirect the gifts to a local homeless shelter, and everyone agreed.

After the initial donation, others started piling in. My fiancée suggested I reach out to Carol Werblin, the director of the Temple Outreach Programs at our local synagogue, Temple Beth El in Huntington, Long Island. Carol said she would help me facilitate bringing the food to 6 homeless shelters in Huntington Station. Neil’s coach and I personally delivered all the pastries to the smiling faces of so many kids and their parents.

As a result of the success of these first few deliveries, I had a discussion with the students thanking them for their donations, and I was able to speak openly with them on hunger and poverty. Their teacher, Coach Rule, decided to create the Manhasset plan. He teaches 5 classes each year, with approximately 25 students in each class, and he asked each student to bring in 3 cans of food, once every fifth week, which yields about 75 cans every week. As a result of my son’s diagnosis, with the Manhasset rallying around him, the largest food donation organization in Long Island was born. We call it [NeilsWheelsNY.com][1].

Since then, we have enlisted many other schools and we expanded “The Manhasset Plan” to include home and office parties, by encouraging the host to tell their guests to come to the party with 3 cans of food. With our programs reaching schools, home and office parties, in 3 short years we have raised over 20,000 cans of food. In fact, we have so raised so much food that we reached out to affiliate NeilsWheelsNY with Harry Chapin’s Island Cares, which services over 600 food pantries on Long Island. They send their volunteers to pick up the food and we can choose where the food goes. However, the best part of what has happened is that my son finally feels like he has a purpose in life again. He is so proud of what we are doing to help people that are less fortunate than him.

Neil has been doing significantly better in the last 3 years because he feels like he has a purpose in life. Two dances at Manhasset High School each year are held in his honor and we collect over 3000 cans of food. I have also been asked to speak about our success at many schools and civic organizations and it affords me the opportunity to talk not only about hunger and giving back to the community, but also about mental illness and the importance of continuing the conversation about mental illness. If I had succumbed to the traditional stigma of mental illness, I never would have spoken to Coach Rule or to Carol Werblin. I would have kept Neil’s disease a secret and treated it as an embarrassment, and thousands of people would still be hungry, thousands of cans would remain uncollected, and my son would feel like he had no place to go in this world. Thanks to Neil, we are able to serve our community, start a conversation, and make everyone’s day a little bit brighter.

Greg is the President of Eco Friendly Printer aka Greg Barber Company and EFP has specialized in environmental printing since the 20th anniversary of Earth Day, 1990.