From Coast to Coast, the Best Seders 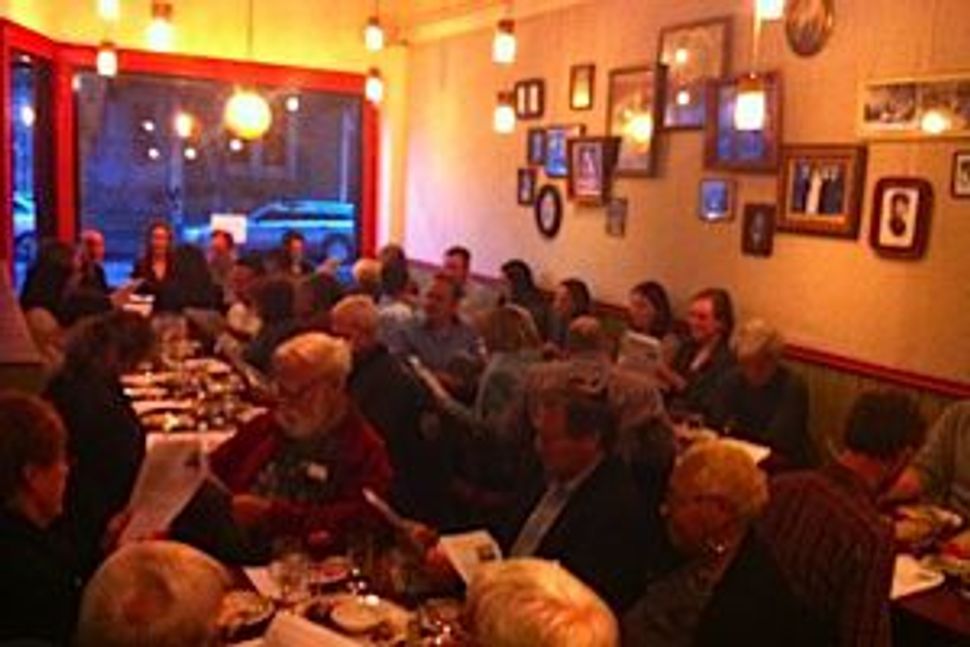 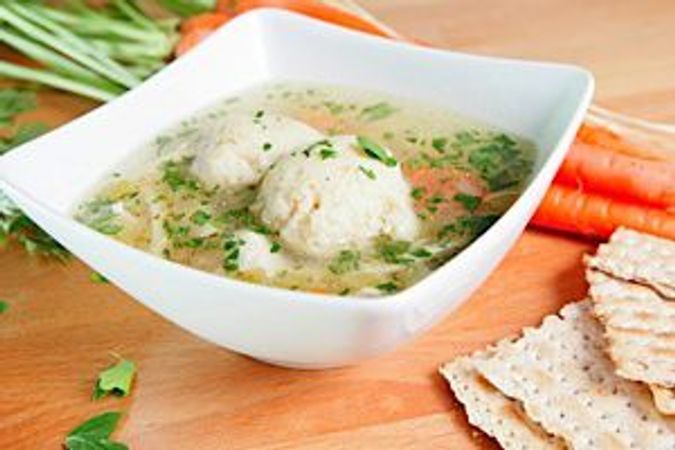 Not up for cooking for the Seders this year? Not a problem. Restaurants around North America are offering seats at the Seder table for those who are hungry for updated Jewish fare like matzo balls in a lemongrass broth, tropical haroset and Turkish flourless chocolate cake.

At some, a Seder service will be led, while at others it’ll be strictly BYOH (bring your own Haggadah). We’ve rounded up some great choices, but there are many others out there. So please add additional suggestions from your city in the comments section below.

Note: These dinners are non-kosher, unless otherwise noted. 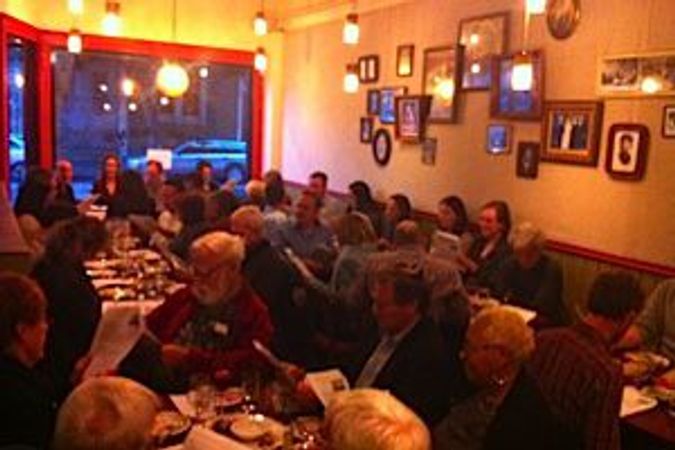 Back Forty West
70 Prince St., (212) 219-8570
If you’re looking for a little Sephardic flair for your Seder meal, this may be the place for you. The four-course menu includes a Moroccan mezze platter, matzo ball soup, house-smoked chicken with Sephardic spices, and Turkish flourless chocolate cake.
Details: March 25 and 26. Seatings available from 6 p.m. on. $55 per person (tax and gratuity not included). The restaurant is supplying Seder plates and written materials, but no Seder leader.

Telepan
72 West 69th St., (212) 580-4300
This is the place for those who want a greenmarket sensibility infused into their Seder meal. The Passover fare is sure to be prepared with the same classic French techniques and fresh seasonal produce the restaurant is known for. The Passover amuse will include a smoked trout latke, chopped liver and dried fruit chutney-apple salad. That will be followed by spring vegetable soup with matzo balls and dill oil, arctic char or red snapper, hanger steak and brisket or roasted and braised chicken, pineapple-lemon sorbet, and flourless dark chocolate cake with coconut sorbet.
Details: March 25 and 26. $85 per person.

Abigael’s On Broadway
1407 Broadway, (212) 575-1407
Consider having your Seder at the place that bills itself “the world’s largest and most prestigious Kosher restaurant.” Chef Jeff Nathan and staff will whip up for you a holiday meal beginning with chicken or beef vegetable soup, and gefilte fish or pecan and berry salad. For the main course, there’s choice of steak, rouladen of chicken or herb crusted salmon. Dessert is strawberry shortcake, chocolate truffle dome or fresh fruit. There’s also an extensive wine list, and all the traditional Seder items are provided.
Details: Kosher. March 25 and 26. Seder seatings at 7:00 p.m. and 8:30 p.m. Choice of either holding your own private Seder or joining a communal one. $127 per person ($65 per child), $6.00 per person surcharge for beef.

Lumière
1293 Washington St., Newton, (617)244-9199
Chef/owner Michael Leviton has invited a rabbi to come in and lead “a fabulous (and casual) inter-faith, freedom Seder.” Leviton is eschewing most of the traditional Seder dishes for more exciting fare inspired by his three favorite Jewish cooks: Joyce Goldstein, Joan Nathan, and his mom. The main course, for example, will be roast chicken with orange, lemon and ginger, spring vegetable ragoût with mint and shallots, glazed carrots, pine nuts, capers and golden raisins.
Details: March 25 and 26 at 6 p.m. $125 per person, all inclusive.

Craigie on Main
853 Main Street,Cambridge, (617) 497-5511
Chef Tony Maws’ grandmother, Baba Hannah, is his inspiration for both his locavore and “refined rusticity” Passover dishes. Diners can choose from the regular menu or enjoy some of Maws’ takes on Passover favorites, which draw on both Ashkenazic and Sephardic traditions.
Details: The restaurant is closed the night of the first Seder. The Passover menu will be available March 26 and 27.

Zahav
237 St. James Place (215) 625-8800
This modern Israeli restaurant is having a weeklong “Passover Mesibah,” or Passover party, rather than a Seder. The special menu puts a Middle Eastern twist on holiday standards. The matzo ball soup has brisket, tomato and Yeminite curry mixed in, and instead of gefilte fish there’s salt cod cakes with pickled cucumbers, English peas and horseradish. The matzo brei is served with sautéed chicken liver, and the whole grilled chicken comes with artichokes and favas.
Details: March 25 to April 2. $48 per person.

The London Grill & Paris Wine Bar
2301-2303 Fairmount Ave., 215.978.4545
This historic bar offers a hearty Seder meal along side new Passover cocktails like the Manischewitz Martini, Sweet Miriam’s Revenge, and The 11th Plague (that one has Manischewitz, walnut liqueur, Absolut, and rhubarb bitters).
Details: Seders on March 25 and 26, à la carte Passover specials all week. $40 per person ($20 for children 11 and under). Seder plate and haggadahs included.

Dino
3435 Connecticut Avenue NW, (202) 686-2966
Chef/Owner Dean Gold veers from his restaurant’s usual menu reflecting the tastes of Venice and Southern Tuscany to offer some traditional Ashkenazi Pesach dishes like matzo ball soup and gefilte fish. But the main courses, like a daily preparation of lamb, Braciole di Pollo (pounded chicken breast stuffed with mushroom and simmered in tomato sauce), and Faroe Island Salmon ai Porri(grilled and served with leek sauce) remain true to Dino’s Italian character.
Details: March 25 to April 1. Dinner seatings on March 25 and 26 from 5 p.m., with synagogue-goers urged to come early and finish before sunset at 7:25. Guests are asked to bring their own haggadahs and to stay no longer than 2 ¼ hours so others can come in and celebrate.

Riva Crab House
700 E. Grand Ave., (312) 644-7482
For the first time, this restaurant on the Navy Pier known for its premium seafood and steaks, is offering a Passover dinner. The holiday menu seems to be much like what you’d get at your bubbe’s except for the horseradish crusted whitefish with roasted carrots and sweet potatoes. But the view of the Chicago skyline and Lake Michigan might make up for it.
Details: March 25 and 26. $40 per person plus tax and gratuity.

Susan Feniger’s STREET
742 No. Highland Ave., (323) 203-0500
People come to STREET to eat street food from around the world without having to leave L.A. On Passover, they come for “A STREET Seder to savor shalom,” with a menu far from the ordinary. Menu items include Russian eggplant with buttermilk sauce and mint oil, heirloom spinach soup with matzo balls, lamb musabi, and matzo crusted spring nettles cakes with mustard sauce and smoked halibut. Vegan versions are available, and there’s a kids’ menu, too.
Details: March 26. Doors open at 4:30 p.m., brief service begins at 5:00, open seating available after 7:45. $60 per person ($25 for children)

Jar
8225 Beverly Blvd., (323) 655-6566
Chef Suzanne Tracht offers a four-course Seder dinner merging her family’s holiday traditions with the flavors and styles of her modern American chop house. Here, the matzo balls will be floating in lemongrass broth, and the main course choices will be pot roast or sautéed Alaskan halibut with Spring scallion butter. Side dishes include horseradish mashed potatoes and sautéed pea tendrils. Lemon cheesecake is one of the desserts.
Details: March 25. Seder service led by a local rabbi, a writer and a singer-songwriter begins at 5:30 p.m. $130 per person ($55 per child under 12), includes wine, coffee, tea, tax and gratuities. Guests are encouraged to donate to Mazon: A Jewish Response to Hunger.

[Wise Sons Jewish Delicatessen][16] 3150 24th St., (415) 787-3354 Unfortunately, both the Seders here are sold out. However, you can put yourself on the waitlist. There’s also the option of ordering the same delicious items, like braised brisket, herb roasted chicken, spring vegetable tagine with caraway yogurt and preserved lemons, and matzo brittle as take out to enjoyed at your home Seder.
Details: March 25 and 26, 7:00 p.m. $70 per person ($45 per child 13 and under) and $30 for wine pairings. Get yourself on the waitlist—it’s worth a shot.

From Coast to Coast, the Best Seders