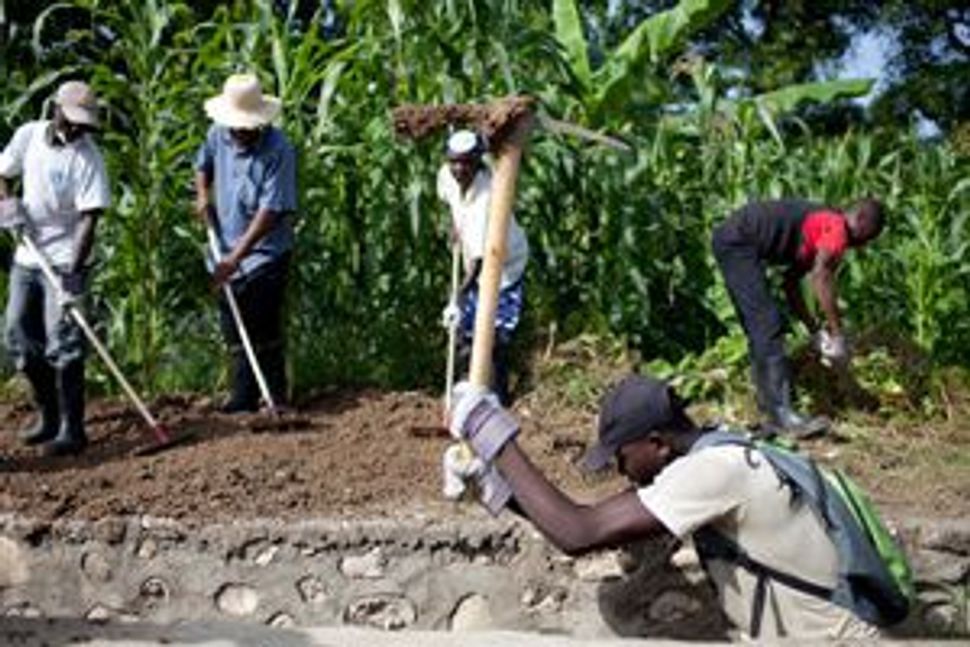 Images of cash for work team working on crops outside town of Sodo. Image by Evan Abramson, courtesy of AJWS

With Passover around the corner, many of us are poised to recite the words, “Let all who are hungry come and eat.”

But when nearly 1 billion people around the world are hungry or malnourished, these words become acutely daunting—particularly for communities recovering from disasters.

More than three years after a major earthquake ravaged Haiti, the country is still struggling to recover. Unfortunately, there is no shortage of problems: homelessness, violence, political corruption and, perhaps most severe, a shortage of food—resulting in hunger. In November 2012, these crises were further exacerbated by Hurricane Sandy, which ripped through Haiti before wreaking havoc in New York and New Jersey.

The destruction of these storms is no longer in the headlines, but Haitian people continue to face an uphill climb to feed themselves and their families. In a study conducted by the Igarapé Institute 68 percent of Haitian farmers reported that their crops were destroyed by flooding resulting from the hurricane, while 77.3 percent reported losing seeds, seedlings or tubers needed for planting new crops. Seventy-three percent also reported the loss of farming equipment and tools, making it impossible for them to plant crops for this year’s harvest.

Haiti’s food crisis is not only a product of natural disasters. It’s also the direct result of the Haitian government’s neglect of the agricultural sector. Instead of making long-term investments in local agriculture, and instead of supporting the livelihoods of peasant communities, Haiti’s government unwisely opted for short-term “emergency purchases” of foreign rice to keep the cost of rice low. This has perpetuated a cycle of dependency on foreign imports and has driven many Haitian farmers out of business. Ironically, the cost of rice in Haiti today is now skyrocketing, and is at least 50 percent higher than it was in 2008 when the country erupted in protest over the escalating price of food.

The situation remains dire, but there are glimmers of incremental progress, in large part due to the work of Haitian grassroots organizations.

In my role as president of American Jewish World Service (AJWS), I’ve seen first-hand the work of Haitian activists who are implementing innovative solutions to the country’s food crisis. Their ingenuity never ceases to amaze me.

Some grassroots groups are providing micro-credit to female farmers in order to help them access seeds from regions of the country that were less affected by the storms. Time and again, in Haiti and elsewhere in the developing world, women have proven to be better equipped than men to enable agricultural economies to thrive. But too often, discrimination denies small-scale female farmers the same access that men have to fertilizers, seeds, credit and farmland.

Other groups in Haiti are refining soil conservation practices and diversifying their harvests by planting new crops, such as Congo beans, which have a better chance of withstanding floods and droughts than existing crops, like black beans. And a number of AJWS’s partners are providing financial management trainings to help peasant organizations jumpstart local agricultural economies.

In his legal code “Laws of Giving to the Poor,” Maimonides, a 12th-century philosopher and Jewish legal scholar, argues that helping people achieve self-sufficiency—far more than ensuring that they have food on their table for just one night—is the highest form of tzedakah and an essential part of developing a responsible Jewish food ethic.

Furthermore, two rabbis from the Talmudic era offer a way to think about our own ethical consumption amid today’s global food crisis.

Rabbi Natan bar Abba wrote, “The world is dark for anyone who depends on the tables of others. Similarly, Rabbi Achai ben Josiah wrote, “When one eats of his own, his mind is at ease.”

Replenishing Haiti’s food supply will take years. But by supporting local Haitian organizations, and by urging our government to reform its international food aid policies, we’re that much closer to ensuring that Haiti’s people and communities are able to feed themselves.

This year, and every year, at Passover, it is not enough to only see ourselves as if we were leaving Egypt; we must also show that we are championing the liberation of hungry people around the world. It is up to us to help ensure that people can feast from their own harvests and put food on their own tables.