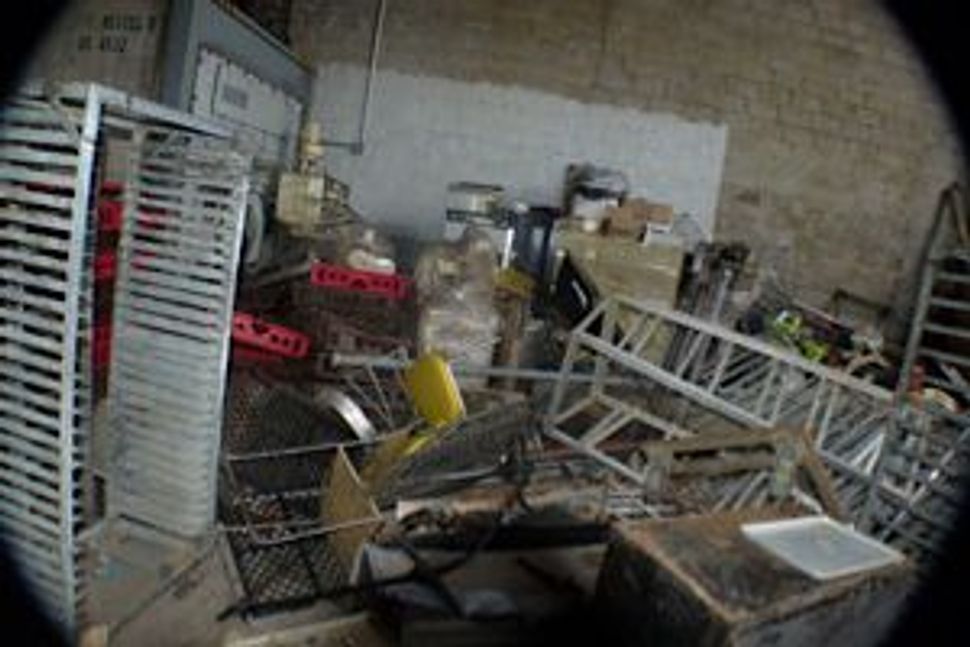 This is all that remains of the Shabtai Gourmet factory after it was hit by Hurricane Sandy. Image by Cindy Itzkowitz

Months after super storm Sandy, the full extent of the damage is still coming to light.

This year, customers around the country scouring local grocery stores for their favorite Passover sweets will be sorely disappointed. Shabtai Gourmet, a company that provided gluten-free kosher for Passover cakes and cookies — including favorites like rainbow cookies, cupcakes, and black and white cookie, all gluten-free — for over ten years, was completely wiped out by the storm.

When Sid and Cindy Itzkowitz ventured from their flood-soaked home in Woodmere, N.Y., to their 12,500 square foot factory in the Far Rockaways, they had no idea what to expect. What they found, Cindy said, was beyond their worst nightmare. “There was seven feet of salt water and sewer water in there,” she said. “Everything was floating all over the place.”

The three massive baker’s tables that Sid and their almost 30 employees used to prep and knead dough on, crashed forward from the very back of the space to the front. “These heavy wooden tables that you can’t pick up with six guys!” Cindy exclaimed.

All the equipment — knives, pots, pans, baking sheets — were completely destroyed by the salt water. But perhaps worst of all, the whole factory was contaminated with waste, rendering it unusable. “All the garbage cans and compactors had non-kosher food in it, so all of our equipment is not kosher for Passover.”

“It was like looking at a nuclear attack,” Sid added.

The Itzkowitzes started Shabtai Gourmet in 2002, but frosting practically runs in their veins. Sid’s father, Israel Itzkowitz, founded GNI Kosher Bakery in Kew Garden Hills, Queens in 1962. Sid, 54, grew up braiding the dough for Shabbat challah. “My husband’s been in the family baking business since he was 11 years old,” Cindy said. “He used to cut classes just to help his father on Rosh Hashanah and all the holidays.”

Though Sid was trained as a regular baker, he soon started a Passover division in his father’s bakery. After a trip to Aruba to bake Passover fare in a kosher hotel, he decided he would make a career out of it.

But what to do for the rest of the year? “At Passover you can’t use any regular flour. You either use potato starch or you use matzo meal or cake meal,” Sid explained. “I have to maintain the kitchen gluten-free and kosher for Passover, so we do the gluten-free version and we sell that year round.”

A prescient move 10 years ago, which paid off in the last couple of years as gluten free diets became increasingly popular. Once reserved to those suffering from celiac disease, gluten-free is one of the fastest growing food markets, and Passover, as Forward reporter Paul Berger recently wrote, is a time for “gluten-free gluttony.”

Business was booming. Cindy, who is president of the company, handled sales, while Sid, the baker, took care of production. Shabtai Gourmet shipped gluten-free products to supermarkets, hotels and day camps across the country, and even as far abroad as England, Portugal and Aruba. Even so, according to Cindy, Passover products made up 98% of their annual business.

And then the storm hit.

With no flood insurance, Sid estimates the damage at half a million dollars, an unfathomable amount for a family who now lives in a one-bedroom carriage house in Lawrence, Long Island, lent to them by a friend. Their house was also ravaged by the storm.

“The water came in from all the sides,” Cindy said. “Everywhere you can imagine. It came in from the lake and the sewer. We lost two full floors and everything from furniture to computers to clothes, to fax machines to my Pesach kitchen. Everything!”

Store-owners who placed orders for their customer’s favorites were left scrambling in the months before the holiday. Though they managed to fill the gap, managers still feel the loss. “[Cindy’s] got things that are unique to her that customers come and ask for,” said Howie Klagsbrun, director of purchasing for Gourmet Glatt Emporium in Cedarhurst, N.Y. He had orders in for over 50 products from Shabtai, including “15 cases of rainbow cookies that would probably have gone up to 30 or 40 by the holidays.”

Randy Levy, manager at the Shoprite in Plainview, N.Y., found himself in a similar situation. “We actually had orders for Passover and we quickly had to shift those orders to her competition. “ But he added, he hopes they will be back in business next year. [Shabtai Gourmet] was a large part of our Passover cake lineup and though we’ve been able to replicate the quantities but whether people will accept the other brands remains to be seen. They want to know when it’s coming in, and when I tell them it isn’t, they look very upset,” he said

Without the funds to repair the factory or start a new business, Shabtai Gourmet is on hold indefinitely.

But fans of the rainbow cookie need not despair. Cindy had backup files in another office, safe from the water. In any case, she said, it would take a lot more than a little wind and rain to stop the Itzkowitzes.

“My husband didn’t lose his recipes because [they’re] in his hands and in his head, and no one can ever take that away from him.”