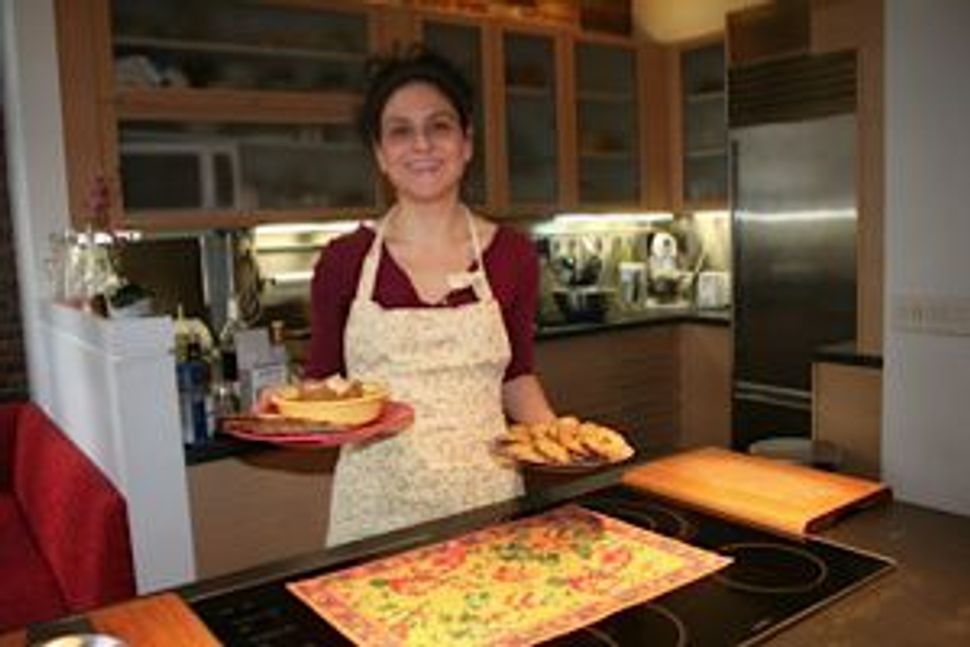 Every Jewish cook has their Passover mainstays, which are usually divided down a line: Ashkenazi or Sephardic, depending on their family’s country of origin. On a recent Tuesday morning we decided to cross over and try our hands at making traditional Syrian Passover foods.

Our teacher was Jennifer Abadi, author of “A Fistful of Lentils: Syrian-Jewish Recipes from Grandma Fritzie’s Kitchen,” private chef and teacher of culinary classes all over Manhattan. Abadi recently launched a new blog, Too Good to Passover, which she’s hoping to grow into a book about Sephardic Passover foods, encompassing foods from many different Middle Eastern cultures.

She promised to keep it simple, and she did. We started our cooking class with macaroons. Forget the canned coconut variety you’re used to… these are made of pistachios. Abadi used salted and unsalted pistachios to get a salty-sweet combination that’s popular in Syrian cooking. The sugar and pistachios were pulsed together in a food processor and egg whites and rose water added later (technically, the recipe calls for orange blossom water, but that’s harder to find).

Abadi threw the batter into the freezer for a few minutes to harden and then spooned half-tablespoon-sized drops onto parchment paper, topping each one with a pistachio. The cookies baked for about 12 minutes in the oven, were left to harden for a few more minutes on their trays. What resulted were sweet and slightly salty chewy cookies, perfect for post-seder noshing.

We also helped Abadi make a Yemenite version of haroset, known as* Dukeh* (recipe below). This one (which Abadi learned from an Israel/Yemenite woman in Brooklyn) is made of dates, raw walnuts, toasted sesame seeds, almonds, raisins, apples (which can be substituted with pomegranate seeds) and that good-ole-haroset mainstay, Manischewitz sweet wine (pomegranate juice can be used instead). Another quick pulsing in the food processor and boom — the perfect spread for matzo.

During all that cooking (and subsequent eating, check out the recipes below) we chatted with Abadi about the staples of Syrian cooking, Passover favorites and more.

Lucy Cohen Blatter: What are some characteristics of Syrian food?

Jennifer Abadi: Syrian food is probably the most varied of all types of Middle Eastern food, with influences from Turkey, India and many surrounding countries. Part of the reason is that Syria was on the Silk Road (a caravan route that connected East Asia to the Mediterranean) that so many foreigners passed through.

Syrian food also tends to be more sophisticated than other Middle Eastern cuisines, since, for a time, Syria was part of the Ottoman Empire. Dishes often have both sweet and savory elements to them.

It’s more similar than it is different. Where it departs is in regards to kashrut. For example, lamb marinated in yogurt is a popular dish in Syria, but obviously not for Jewish cooking.

What interests you about Passover?

Whether you’re observant or secular, everyone celebrates it. It’s like the Jewish version of Thanksgiving in the U.S. (and just like Thanksgiving, people are profiting from it all over the place). I love the stories and the tradition that surround Passover, and the context of the food. I’m interested in preserving all that. The fact that starting after Purim and leading into Pesach starts a month-long preparation that goes from room to room, that’s something that happened in the Old Country and still happens today.

What dishes are served at a traditional Syrian Passover Seder?

There’s always lamb, and I do it so simply. It’s just long-roasted lamb shanks with garlic, lemon juice, salt and pepper. That’s often served with rice and some kind of vegetable, like green beans. But before dinner, of course, there’s haroset. There are many ways to make it, but all of them usually have dates in them, and some mixture of nuts and seeds. Sometimes after the haroset you’ll have soup. A lot of us Syrians serve traditional Ashkenazi-style matzo ball soups [that’s one dish that’s carried over], but we also make a soup called kibbeh hamdah, which is a sour broth with baby meatballs. Desserts, like other Middle Eastern cuisines, are usually very sweet. But they’re meant to be eaten in small amounts and are often served with dark, bitter coffee. Usually they’re some combination of nuts and dried fruit and/or fresh fruit.

Do you have any favorites for the week of Passover?

I love to make mina, which are basically layered matzo pies, either layered with meat or with cheese and vegetables. They freeze really well. That’s key. Since it’s my busy season, I start my cooking and freezing for Passover about now.

How can I stock my pantry the Syrian way?

Cumin, allspice and cinnamon are the three most important spices. Bulgur wheat, rice, apricots, tamarind paste, and rosewater or orange blossom water (for desserts) are good to have, too.

Dried fruit is also popular in Syrian cooking, and it adds sweetness to savory dishes as well as desserts. There’s also tamarind paste (which cooks can procure at Whole Foods), and rose water or orange blossom water (for desserts). Fresh lemons, too.

Whenever I teach a Syrian cooking class I bring a bag full of lemons, and I’m undoubtedly still searching the school for some extras by the end of the class.

What’s the first Syrian dish a novice should try making?

M’jedrah, a dish of rice and brown lentils and yellow onions that’s often served with a yogurt-mint dressing. That’s a dish that’s always around the Syrian home.

1) If you have roasted sesame seeds, skip to Step #2. To roast the regular sesame seeds, preheat the oven to 400 degrees F. Spread the seeds out in a small baking pan and toast seeds until lightly browned, about 20 minutes, shaking the pan every 5 minutes to even distribute. Remove from heat and cool completely before blending with other ingredients.

2) Place walnuts, almonds, and roasted sesame seeds into the food processor and pulse quickly 3 or 4 times, just until the walnuts and almonds are broken down a little bit.

3) Add the pomegranate juice (or wine), pomegranate seeds (or apple pieces), dates, and raisins and process until a thick paste.

4) Pour into a medium container and seal. Store in the refrigerator for up to 2 days, or freezer for up to two weeks. When ready to eat, bring to room temperature. Blend with a few tablespoons of wine until the consistency of apple butter, or serve thick as is, sprinkled with extra pomegranate seeds or coarsely chopped apple pieces, if desired.

2) Place the pistachios and sugar in a food processor and pulse until blended but still very coarsely ground (mixture should be slightly chunky with some pieces about 1/8 inch).

3) Add the egg whites and orange blossom water and pulse again until mixture turns into a thick dough (it’s good if the nuts remain a bit chunky).

4) Scoop out half a tablespoon of the dough, and using your thumb push the dough out onto the prepared baking sheet, leaving one inch in between each macaroon. Press one whole pistachio vertically into the center of each macaroon, and bake until lightly golden around the edges, about 12 to 15 minutes.

5) Cool for half an hour before removing from the parchment paper or the cookies may break apart too easily. (See note below)

To serve, arrange close together on a nice platter or plate, sprinkled with confectioners’ sugar, if desired.

Note: You may freeze the cookies at this point by placing them between layers of parchment paper and tightly sealing inside a plastic container. They will last up to 3 weeks. When ready to serve, remove each layer of cookies on the paper and place on the countertop to defrost 20 minutes. Sprinkle with the confectioners’ sugar (if desired) and serve.