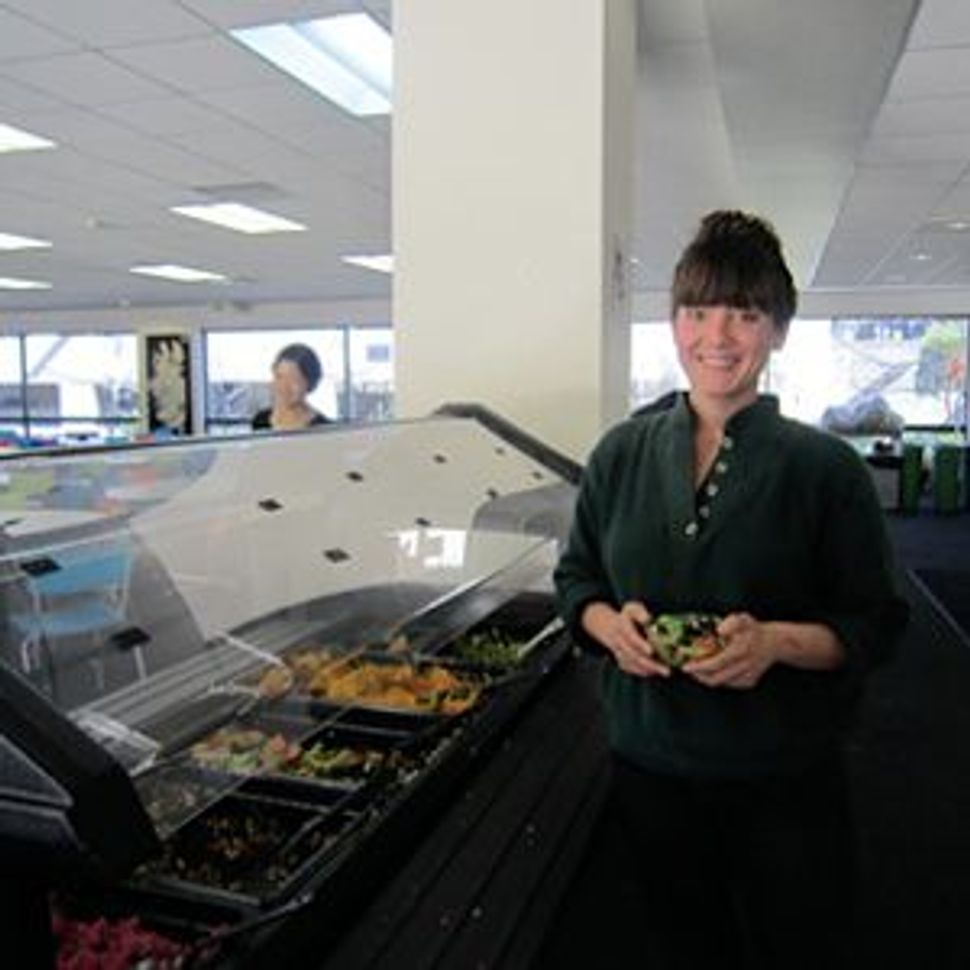 The phrase “school lunch” conjures up images of soggy chicken tenders or limp spaghetti in my mind. Yours too?

What if I told you that I ate lunch at a San Francisco high school recently and sampled Israeli couscous with beets … rainbow chard with white beans … coconut-cilantro rice with yams and broccoli … Brussels sprouts and apples with shallots, mashed kabocha and butternut squash … and celery root soup?

While the Jewish Community High School of the Bay’s lunch program has gained notice since Jesse Buckner-Alper started it in 2005, for its emphasis on healthy, organic, vegetarian and kosher food — even winning a Golden Carrot award from Physicians Committee for Responsible Medicine — the school is not resting on its laurels. Rather, lunch director Risa Lichtman has instituted an Eat Local Day, which I attended last month.

(The students don’t eat like that every day; regular days are still mostly organic and fully vegetarian, but not with quite as much selection, e.g., pasta day and taco bar day are standards.)

Feeding 180 students and staff with the school’s infamous kitchen — the former podiatry school has no ovens or stoves, only six hot plates — such healthy food with everyone’s dietary restrictions is no small task.

“I try to stay away from all white foods,” Lichtman said, “as well as expose the kids to foods they might not have tried before.”

Risa Lichtman, lunch director at JCHS of the Bay photos/alix wall This is the Bay Area, though, and while some students are sophisticated foodies, others are not. “Quinoa is always an option on pasta day,” Lichtman said. “Some kids are into it, some aren’t, and some had never seen it before.”

There are also several barbecue days that happen each school year. For those, Lichtman orders from Grow & Behold, a New York–based kosher meat company that sources all of its meat from small farms, where the animals are treated ethically.

“People notice that it tastes better,” she said.

Lichtman integrates the lunch program into the fabric of the school as much as possible. For example, students have helped her make kimchi (a fermented Korean dish), and an algebra teacher has taken figures from Lichtman’s kitchen budget to incorporate into tests.

Some of the selections at Eat Local Day last month “I didn’t really think about my food choices until college, so it’s exciting that we’re planting the seeds now,” Lichtman said. Overall, the lunch program is definitely noticed by the students.

Senior Boris Shkurko said that before he began attending JCHS, “Food was just food,” adding that given his family’s Russian background, he ate very differently at home than how he eats at school now.

Besides being exposed to a host of new foods, he said, he has learned how his food choices have an impact not only on his body, but on the greater community.

On Eat Local Day, much of the produce on the menu above came from local farms or the Civic Center farmers market. Also, before lunch, Antonio Roman-Alcala, an urban farmer and food activist, showed clips from his film “In Search of Good Food.”