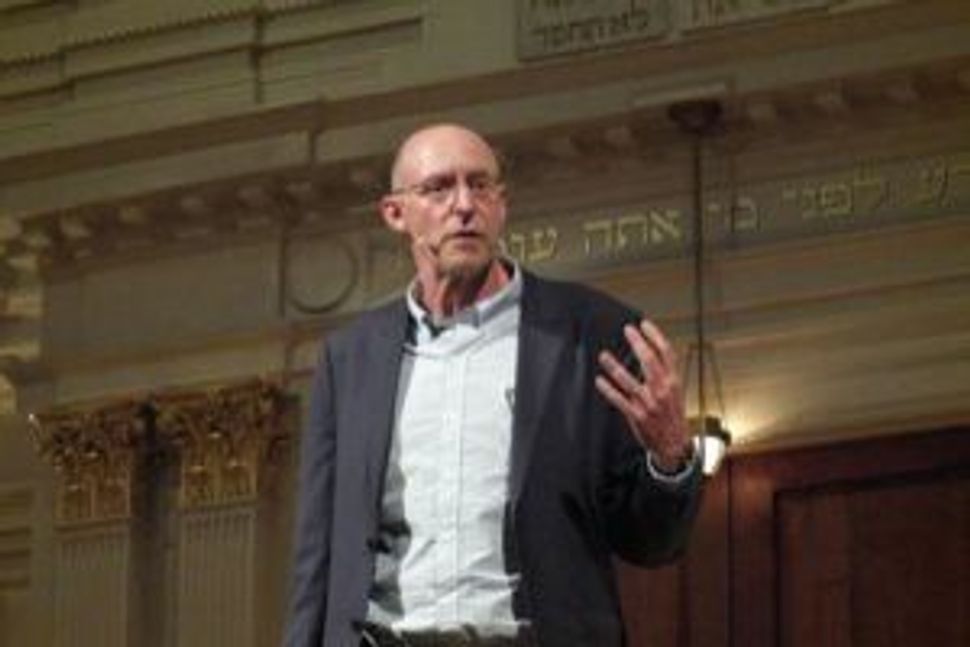 Michael Pollan chats at D.C.?s 6th and I Synagogue. Image by B Guthrie Photos

“I like pork a lot,” author Michael Pollan admitted recently to a packed sanctuary at Washington, D.C.’s Sixth & I Historic Synagogue.

Then he turned to look at the stained glass window embedded with a Magen David, and added, “but I do understand the value of 3,000 years of tradition.” Pollan went on to discuss the illusion of inexpensive convenience foods and the “Portlandia aspect” of the food movement.

This was Pollan’s first major appearance of a national tour, and it couldn’t have better encapsulated the personal, traditional, economic and political realms that merge in his new book, “Cooked: A natural history of transformation.”

The book is based on an epiphany. Pollan writes that he “made the unexpected but happy discovery that the answer to several of the questions that most occupied me was in fact one and the same. Cook.” His six previous books cover many aspects of the food system, from growing to processing to waste. Yet cooking, he told the audience, was “the missing link.” (One can’t help but wonder if, given Pollan’s Midas touch with book sales and the four-year lapse since his last publication, an agent’s nudge might have also played a role in this revelation).

Like Pollan’s hit “The Omnivore’s Dilemma,” “Cooked” is organized into food-centric sections. Instead of types of meals, this time Pollan devotes the book to the four elements: Fire, water, air, and earth — each aligned with an adventure showing how the element transforms ingredients into whole-hog barbecue, pot dishes, bread, or fermented products. Each part unfurls a world of sights, scents, and flavors with Pollan’s signature poetic prose, textured by characters renowned in each art — one of which is Jewish fermentation guru Sandor Katz.

The book will keep the thinking food lover engaged, but readers in for a foodie beach read should beware. For every quirky barbecue man and heartwarming family dinner there’s a town devastated by the hand of Big Livestock or a question like “Is cooking a form of oppression, as many feminists argued (with some justification, I might add) in the 1960s?” And for every Food Network-like romp through the braising process there is a break to open 18th century tomes theorizing about the origin of cooking fires and their implications for the human species.

The overall message in all of this? It’s simple: Don’t outsource your cooking to corporations. Adding to Pollan’s famous instructions to “Eat food. Not too much. Mostly plants,” it adds “…and cook it yourself.” This, he believes, is the portal to wholesome eating and a healthy food system.

Pollan has been named among the Jerusalem Post’s top 50 most influential Jews and, just before the book came out, New York’s Temple Beth El honored him with a Shofar award. But references to Judaism in the book only brush against this aspect of his identity.

One reference comes in the form of a pet pig Pollan’s father named kosher. Another is a nod to the sacred role of meat in the Torah and the separation of milk and flesh. But, while Pollan ardently champions family dinners and repairing the food system, neither Passover seders nor the term tikkun olam figure into this plot.

Food book fans might contrast that with Jonathan Safran Foer’s “Eating Animals,” which opens with a rapturous description of his Jewish grandmother’s simple cooking and World War II-inspired frugality. Or they may remember Pollan’s own tale of his mother’s Jewish diet in “Food Rules.”](http://michaelpollan.com/books/food-rules/)

It’s not that the narrative of “Cooked” pans too far out for personal stories. The pages brim with references to Pollan’s son and wife, including a hilarious scene in which the three put their dinner at the mercy of the frozen food aisle to the great detriment of family cohesion. And it’s not that Pollan acts standoffish around fans. The writer appeared at Sixth & I in jeans and a blazer, his lean frame in full view as he walked the stage with a headset microphone. He gamely answered audience questions, too, even when one plumbed for his naughty food passion (as Colbert fans know, it’s Cracker Jacks). Pollan’s Jewish identity simply doesn’t loom as large as other themes.

The themes Pollan does explore will continue drawing crowds to bookstores and synagogues around the country. Fans will come for a new take on food, and for most it will hit the spot.