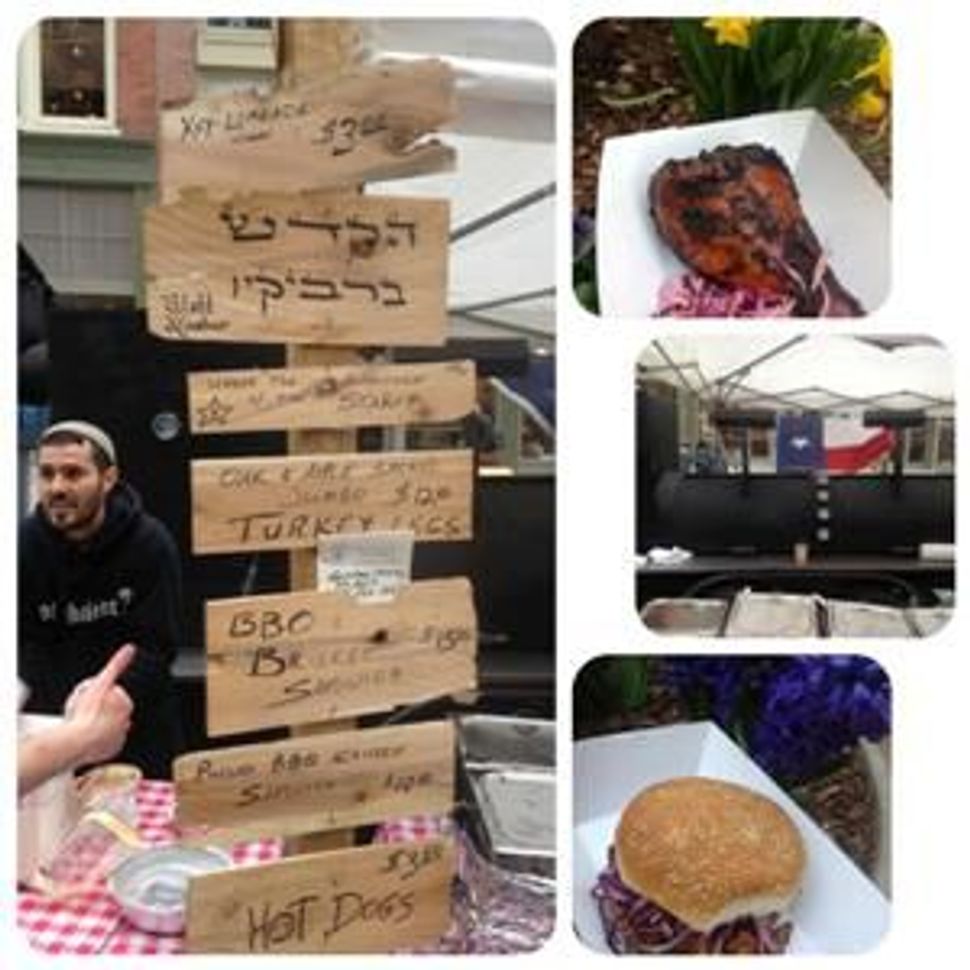 What do you get when you combine 1300 lbs of brisket, a 20 ft smoker and BBQ rig and a brilliant mind well versed in Texas BBQ recipes? May I present to you, the new kosher travelling hot spot in NYC: Hakadosh BBQ.

Ari White, founder and owner of Hakadosh BBQ is the brainchild behind this newly kosher cuisine called “Texas Style Wood Burning BBQ”. It was in August 2012 that Ari White began holding one week pop-ups in Riverdale and its inaugural endeavors deemed so successful, that Mr. White decided to take his show on the road beginning this spring 2013. Hakadosh BBQ is quickly making its way across the Upper West Side Kosh food scene, premiering in Manhattan at the Union Square Farmer’s market on April 7th.

Working with Hazon, living on the Upper West Side and just being a kosher foodie, I knew I had to investigate what all the hype was about. I decided it was only appropriate to visit their set up rig on Lag Ba’omer, a holiday associated with barbequed meats. Luckily, this last Sunday Hakadosh BBQ was conveniently located at the UWS Street Fair. While passing through all the typical sunglasses, scarves and artsy chochkie stands in search of a “Texas Roadhouse Food Truck”, I soon learned that a 20 ft wood burning smoker is not commonly found in this neck of the woods, much less in food truck form. I continued to navigate my way through the busy street fair in search for this kosher southern fare.

I followed a chalked up sidewalk with an arrow pointing in the direction of the infamous meat, otherwise I may have walked right passed the rig (well maybe the aroma probably could have reeled me in.) The customer line spoke for itself about the quality of the food. While I waited in line for the infamous Pulled Brisket Sandwich (I decided before I even arrived what I was going to try) I could smell the sensational aroma of smoked meat and unique flavors abounding.

Another menu item that caught my eye was the turkey leg, so reminiscent of holidays spent in Disney World where I would run past all the “turkey leg” stands and smell the smokiness and rich flavors in the Magic Kingdom., but was never able to taste because there were treyf. But Sunday was my opportunity to make my childhood dreams come true; a giant turkey leg that was KOSHER! After taking the first bite I found it to be tougher than I expected, but the seasoning and texture were brilliantly combined and my taste buds danced, as I closed my eyes to take another bite it took me back to my childhood days.

After eating a wonderful meal I had the opportunity to speak to the owner Ari White. White, who hails from El Paso, originally, reminisced about smoked meat a staple of his family’s food traditions. Both his father and grandfather were big meat smokers and smoking meat for family simchas was the norm to this southern native. It is evident through his food that his Southern roots really shine through. He explains to me that the apple and oak flavored wood really draws out all the essence of the meat. And that the smoked turkey legs luxuriously smoke for up to 12 hours and the brisket approximately 16-18 hours. In speaking to White it is evident that his passion for cooking and for schlepping this rig all around Manhattan is truly a labor of love.

Adrienne Winton works at Hazon and staffed Hazon’s Cross USA Ride in 2012 and is looking forward to another adventure next summer! Adrienne holds a Master’s degree in Outdoor Education from the University of Edinburgh in Scotland. Adrienne loves travelling, exploring unique Jewish communities and creating innovative recipes in her small yet versatile kitchen.