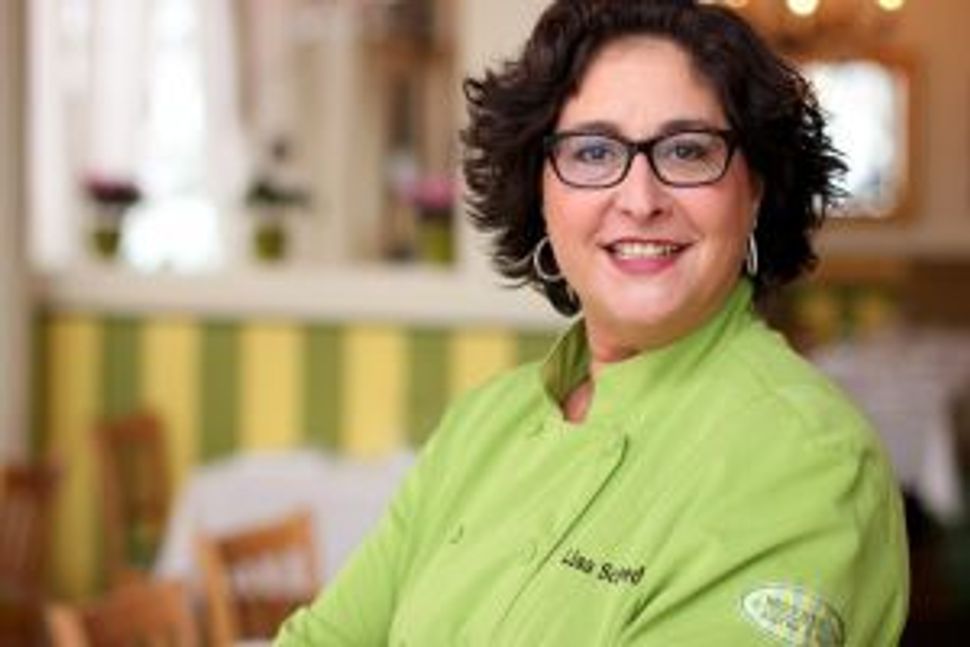 Another Helping: Lisa Schroeder, the owner and chef of Mother?s Bistro & Bar in Portland, dishes out advice along with her comfort food. Image by Alicia J. Rose Photography via JTA

It’s brunch time at Mother’s Bistro & Bar and owner-chef Lisa Schroeder has a small crisis on her hands involving the accidental defenestration of a busboy.

Moments earlier, a server had tripped and gone flying through one of the restaurant’s large picture windows. Shattered glass covered the pavement outside, where the hapless staffer was being treated for a nasty gash by an ambulance crew. Meanwhile, dozens of undeterred diners were waiting to be seated.

“What’s a big piece of glass in somebody’s back?!” Schroeder bellowed in thick Brooklynese, trying to make light of the situation. “Let me show you to your table,” she told a waiting party.

A few minutes later, the busboy was patched up, a heavy curtain was wrapped around the empty space where the window used to be and the steady ebb and flow of customers returned to normal.

It’s all in a day’s work for Portland’s unofficial Jewish mother in chief.

Since opening Mother’s in 2000, Schroeder has won several accolades for her clever take on classic comfort food, including being named national restaurateur of the year in January by Independent Restaurateur magazine. Along with Ken Gordon of Kenny and Zuke’s deli and Scott Snyder, who serves up Sephardic cuisine at his restaurant Levant, Schroeder is one of several Jewish chefs to become fixtures in Portland’s acclaimed culinary scene.

The Jewishness of Mother’s is conceptual rather than culinary, revolving around the time-honored Mosaic tradition of mother worship. Yes, she serves chopped liver (“my mother’s recipe”) and matzah ball soup (“we finally figured out how to make them light after 13 years”), but she also offers biscuits and gravy, crab cake, pork loin and steak frites.

“If a mother would make it, we serve it,” said Schroeder, 55. “Our stir fry we got from a Thai mother and we serve that.”

Each month, the restaurant selects an M.O.M., a mother of the month, who submits several recipes included on the menu. April’s M.O.M. was Laurie Goldrich Wolf, a local food writer and one of a growing community of Jewish transplants to this city.

The path to Schroeder’s becoming one of Portland’s most celebrated chefs was somewhat serendipitous. Born and raised in Philadelphia, she moved to Israel with her ex-husband in the 1970s right after high school. By 1979 she was done, driven home by the challenges of making a living in the Jewish state and the election of right-wing Prime Minister Menachem Begin.

At 33, Schroeder decided her true passion lay in cooking, so she enrolled at the Culinary Institute of America campus in upstate New York.

“I always knew I wanted to open up a a restaurant called Mother’s,” she said. “Back in ‘92, when I was working in marketing, I realized the world needed a place that served mother food. Everything I did for eight years was with this in mind.”

Schroeder honed her kitchen skills at Le Cirque in Manhattan and several eateries in Provence, France. Eventually she met a Portland man and, after coming out for a visit, decided it was the perfect place for her.

“They didn’t have motherly cooking or comfort food restaurants, and it was easy being a big fish in a small pond,” Schroeder said.

When she isn’t running Mother’s, Schroeder can be found dispensing advice at Burning Man, the annual arts festival and bohemian bacchanal in the Nevada desert, where she goes by the name Mamaweitz. Many festival goers, or Burners, assume alter egos during the event. Schroeder’s wasn’t difficult to come up with.

“What am I secretly? I’m a Jewish mother,” she said. “Everybody needs a mother, only sometimes not their own. They need someone wise, who’s been around. I set up my booth at Burning Man and the kids come to me with their burning questions.”

More than a decade after its opening, Mother’s has expanded into an adjacent store. Schroeder’s family has expanded, too. She’s not just a mother anymore but a grandmother to four.

Despite her multigenerational family and stature as something of a Portland institution, Schroeder says her peripatetic life has made her feel like a perpetual stranger.

“As a Jew in the Diaspora, I really got to be honest with you, I don’t feel any place is home home,” she said. “I used to feel New York was home and I kept on going to visit after I moved, needing that New York fix. But not anymore.”

Now it feels like a big mall to her.

“I guess home will always be Israel,” she said wistfully.

Despite the Zionist tug, Schroeder has no plans to move back, even though it’s been more than three decades since Begin occupied the premier’s residence.

“Come on guys, it’s a mess,” she said of the situation in the Middle East, snapping out her contemplative reverie and returning to her outspoken self. “We got to get it together.”