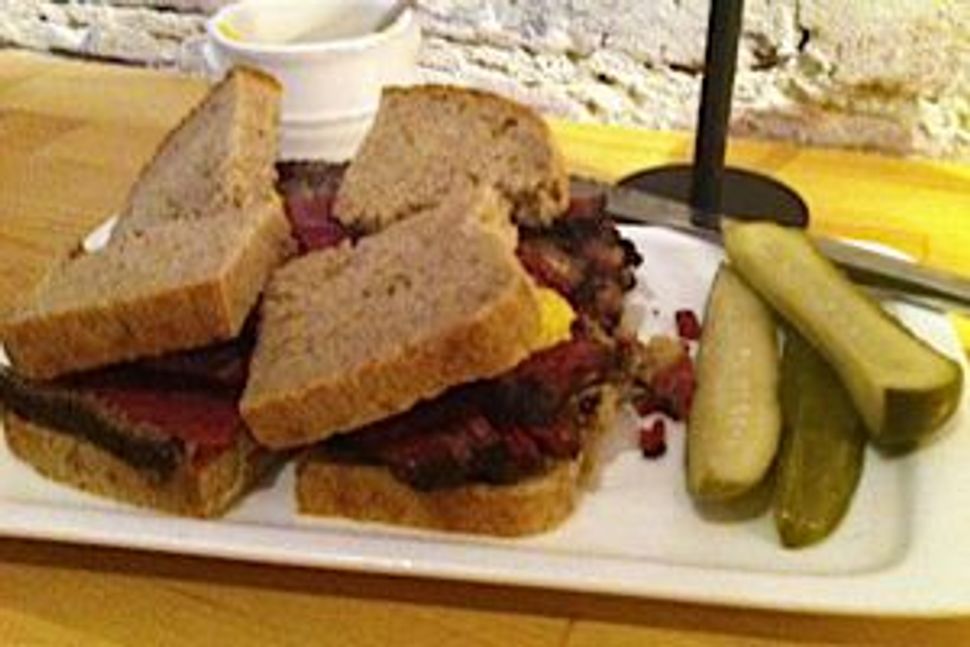 I recently ate lunch with some family members at Shorty Goldstein’s and was overwhelmed…by the vinegar. I’m afraid that if chef and owner Michael Siegel doesn’t change some things at his new deli in San Francisco’s financial district, he’s going to be in a real pickle.

When I spoke to Siegel in December of last year, as he was working on opening his restaurant (really, more of a lunch counter), he told me that he would serve lots of Jewish deli classics, but that he would add his own, contemporary California-style twists to them. “It will be a mix between tradition and my style, which is a little nouveau,” he said.

The problem I found is that these changes Siegel has made are detracting from the authentic deli food that he is doing right. The biggest issue is his pickles. All you get when you eat them is an overpowering bite of vinegar. The vegetables’ natural flavors are lost, and there are no discernable spices.

This was especially so with the pickled strawberries (which came on a pickle plate with asparagus and fava beans). The pickled cucumber that came with our pastrami sandwich was bland and had only a vinegar-y note. There are perhaps things that can be updated, but it is ill advised to tinker with kosher dills. (When someone patronizes a Jewish deli, they expect a traditional sour or half-sour pickle bursting with garlic flavor.)

On the other hand, Siegel’s pastrami, which he cures and smokes himself, was delicious, if a bit too peppery. It’s just too bad there wasn’t more of it. There wasn’t much meat for $12.00, and there wasn’t much holding together the meat, either. What was supposedly rye bread (baked by the local Cinderella Bakery), was more like a fluffy white or potato bread. Rather than keeping the sandwich together, the overly soft slices almost disintegrated in your hands.

Not usually a fan of chopped liver, I was surprised to find that Siegel’s version of it (actually, it’s his grandmother’s recipe) was very good. It was very light and airy, with the consistency of a paté, and the liver flavor was muted nicely by the egg and caramelized onion mixed in. It was served with the same “rye” bread, but this time toasted — a smart move. I only wished that the pickled fennel served had instead been caramelized onions, a more traditional choice.

With no other Jewish deli in the immediate area, Shorty Goldstein’s has a shot of making it. Its staff is friendly and helpful, and the Siegel gets the orders out to the rushed lunch crowd within minutes (often serving the food himself and taking the time to shmooze with the customers).

On one wall is a huge diagram of Siegel’s family tree, on which appear the names of all the traditional Jewish cooks who have inspired him. If he wants Shorty Goldstein’s to take root, he might want to consider sticking a bit closer to their original recipes.