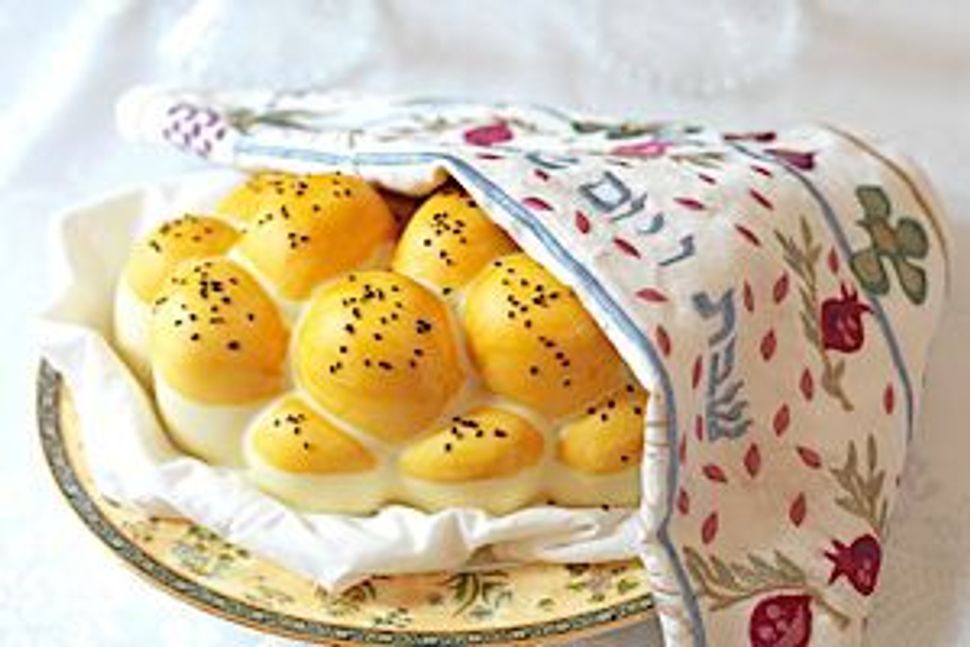 Guests at Gefiltefest can guess how much this white chocolate challah made by David Mendes weighs. The closest guess wins! Image by Charles Taylor

Four years ago, Michael Leventhal, a young publisher of history books living in London won a Jewish newspaper contest. His prize? A one-on-one cooking lesson with a chef. But his Sephardic wife, who is a wiz in the kitchen, feared that the lesson might be wasted on just the two of them. Leventhal decided to trade in his reward for a cooking demo for 10 friends. Pretty soon after, friends and acquaintances started to suggest other Jewish food topics they were interested in and some volunteered up their time to serve as speakers. “In less than 6 weeks had created a one day food festival. Within two weeks we sold 200 tickets and that was the first Gefiltefest,” Leventhal told me recently.

Next weekend Leventhal will welcome some 750 guests to this year’s festival in London, which is the only one of its kind in the UK and possibly the largest Jewish food festival outside of Israel. A mix of cooking demos, panels, fressing and Jewish study sessions, Gefiltefest is a non-denominational event dedicated to all things Jewish and food — a Limmud for food, if you will.

This year’s lineup includes a cooking demo with a Tunisian Jewish cook, a study session that will look at whether the locusts swarming Israel this spring are kosher (taste testing included) and curious sessions like “Israel, the Promised Land of Soft Drinks?” and a class on how to use edible ingredients to create portraits of famous Jewish characters from history. Favorites from years past like challah making and pickling workshops will also be on offer.

Despite the interest in Gefiltefest, Leventhal says England’s Jewish food scene isn’t booming quite the way it is in the States, but “almost every key Jewish chef is coming, says Leventhal. That includes Amy Beilin, the creator of the kosher pop-up project Sunday Roast, which offers kosher-keeping Londoners a place to eat the classic British meal. She will be teaching eager cooks to make a kosher rendition of a Scotch egg (an egg wrapped in ground meat and deep fried).

Also on tap this year is a fierce Ashkenazi vs. Sephardi cook-off where cooks will have 40 minutes to prepare an egg and a potato dish using flavors from their respective cultures. At another contest, festival goers will get to crown their favorite challah, bagel and rugelach in London with the winning teams receiving the Golden Aubergine award — eggplant is also the symbol of the festival.

Why aubergine? “During the Spanish Inquisition if you cooked it with oil instead of lard it was evidence that you were a Jew,” says Leventhal. Every recipe has a history to it and story to it…You can tell the history of the Jewish people through recipes and foods — particularly the aubergine.”