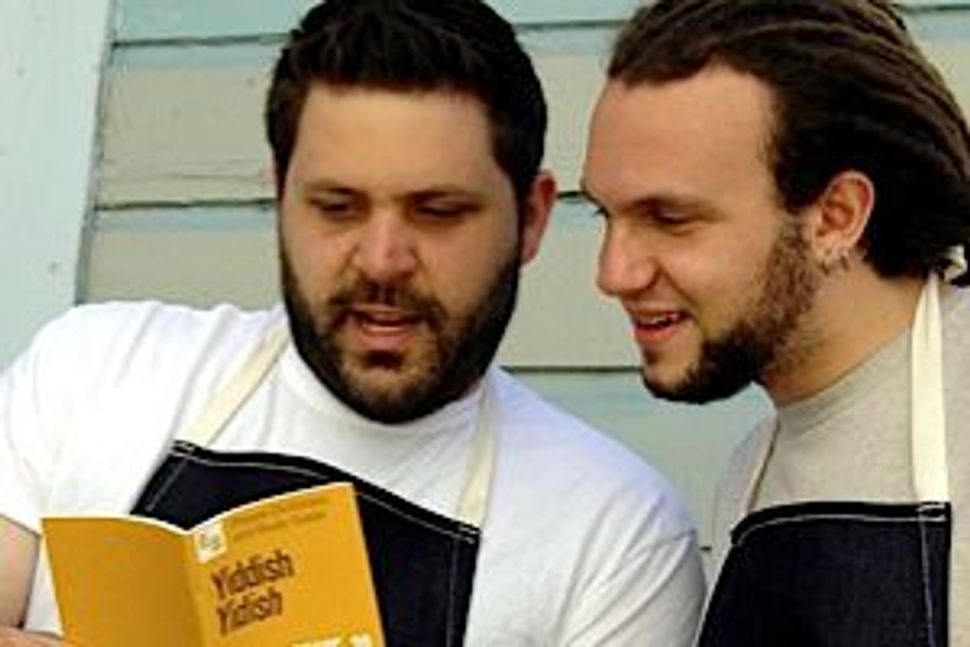 Wise Sons: Evan Bloom (left) and Leo Beckerman serve up nouveau deli sandwiches at their shop in San Francisco and soon at the city?s Jewish museum. Image by Courtesy of Evan Bloom

For those who may have been wondering whether new tastes would arrive at the Contemporary Jewish Museum in San Francisco with its new director, there is now an answer. While Lori Starr will not officially become the museum’s new executive director until June 10, word is already out that Wise Sons will be moving into the downtown museum’s vacant restaurant not long afterwards.

Wise Sons’ Evan Bloom and Leo Beckerman, who are among the leaders of the Jewish deli revival of recent years, told j., the Jewish news weekly of Northern California, that they were very excited to open a second location at CJM. “It’s the next logical step for us,” Bloom said about the projected mid-to-late June opening.

To accommodate the additional food production involved in expanding beyond their restaurant at the corner of 24th and Shotwell Streets in the Mission District, Bloom and Beckerman have leased a new space that will allow for the increased production of baked goods and cured meats.

Everyone involved in bringing Wise Sons to CJM’s Daniel Libeskind-designed, 5-year-old building is banking on the young partners’ celebrated deli fare bringing in diners, whether museum visitors or not. Wise Sons will occupy the museum’s café space, which previously housed two other food establishments, both of which ceased operating after two years or less.

The menu will include items from the deli’s regular menu, but will focus primarily on lunch fare such as sandwiches, soups and salads. Matzo ball soup will be available every day, as will deli staples like brisket, corned beef, roast beef and smoked salmon sandwiches. To meet the different dietary tastes and needs of the downtown lunchtime crowd, there will also be a variety of salads, a daily vegetarian soup, and other vegetarian options. Bloom and Beckerman may begin opening for breakfast service as early as July. The food will be kosher style (no pork or shellfish), but not kosher.

Having already proven that what’s old is new again, expanding to a museum that is both Jewish and contemporary seems like a natural move for Wise Sons.