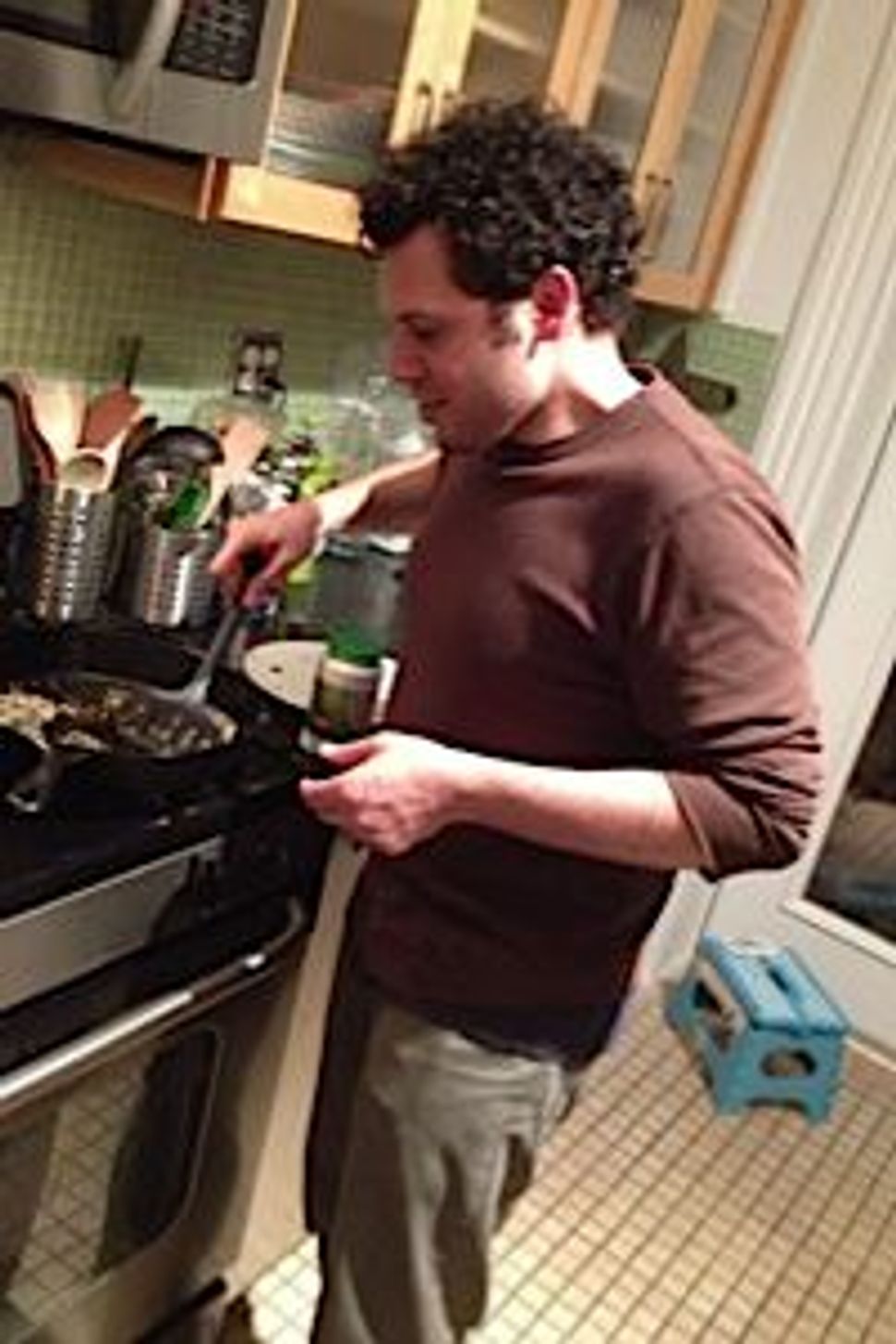 Image by Courtesy of Gal Beckerman

I had gotten lazy. I’ll admit it. Since getting married almost five years ago, I had not really set foot in a kitchen (to cook, that is — I wash plenty of dishes). Not that I was any great chef before. But I was a bachelor, living alone, and I had my meager repertoire, including something called “Eggplant Surprise” — don’t ask what the surprise was. Even that was abandoned in the fairly commonplace division of labor that happens when two people make a home. She cooked. I cleaned.

But recently I’d started feeling strange about how disconnected I’d become from what I was putting in my mouth everyday. When you don’t cook, it’s easy to disregard what makes up the food you eat. When it’s something that’s made for you, it’s easy to stop thinking about how it’s made or — more importantly — what it’s made of. I can’t say I was eating unhealthily, but I just wasn’t very conscious beyond knowing, generally, what was good for me and what wasn’t.

Enter Mark Bittman and his new book, “VB6: Eating Vegan Before 6:00 To Lose Weight and Restore Your Health…For Good.” (And this is when I’m going to try my damnedest not to turn this post into an infomercial.) I don’t know what precipitated it — maybe one too many days of a pastry in the morning or a turkey sandwich that just made me feel sluggish — but about a month ago I started feeling the need for some kind of alteration in my eating habits. And then I discovered Bittman’s new diet book, which has a fairly simple and easy-to-follow main premise: Eat like a vegan before 6 pm.

Like most diets, the conceit is there to provide discipline, but the bigger philosophy it points to should be familiar from Michael Pollan’s now famous seven words: “Eat food. Not too much. Mostly plants.” Bittman proposes a diet based on this idea, one that radically reduces your meat and dairy intake, increases the amount of vegetables, fruits and grains you eat as a result, and — not a vegan idea but thrown in for good measure — eliminates processed food. The book also offers a pretty good primer, a sort of “Pollan for Dummies,” on all the reasons this sort of diet is healthier and environmentally and ethically more responsible.

I ate it up, so to speak. I liked the unfussiness of his plan and the easy mind trick of just thinking like a vegan for breakfast and lunch but relaxing the rules at dinner. But the effect it has had on me went beyond just eating differently. The changes I had to make weren’t that dramatic — not having milk in my coffee was maybe the biggest sacrifice. What it did do was make me think, for the first time in a long time, about food.

Bittman intends the book for people who want to lose weight, lower their cholesterol, or just eat healthier — but for me the result was eating more mindfully. This last month, beyond feeling better — which I do — I thought about the various components of what I was eating. Like I said, I wasn’t eating terribly. But before VB6 I would get up, have some granola with yogurt and a cup of coffee, then maybe if I was still hungry, get a muffin or croissant when I got to work. Suddenly all I saw was the sugar in the granola, the dairy in my coffee and in the yoghurt, and then the processed white flour (more glucose) of the baked goods. So instead, these past few weeks I’ve been eating a homemade cold cereal from Bittman’s recipe (rolled oats, chopped up nuts, raisins) with oat milk, and then eating a banana when I get to work.

These are just slight shifts. The bigger change is that this new mindfulness about food has got me cooking. Bittman’s book has recipes, and if you know Bittman’s style, it’s all incredibly simple. Cooking became a necessity once I realized that, unless I started making my own meals, I was going to start making culinary demands on my wife so that I could stick with my new diet. And that simply wouldn’t fly in my house. Plus I liked the idea of making her feel that I was capable of change — not a bad thing to do if you’re in a long-term relationship where certain patterns can calcify.

I started with something that seemed fairly simple, Bittman’s recipe for baked falafel. My wife warned me that falafel would kind of lose their falafel-ness if they weren’t fried, but I was determined. I found the cooking itself all very enjoyable and meditative, rediscovering those gestures of chopping and mixing and measuring from my long ago Eggplant Surprise days. Except she was right, and no one wanted to eat my falafel once they were done. (The Israeli in me rebels even at the thought of using that word to describe them — let’s call them roundish baked chickpea cakes.)

I waited a week and tried again, this time preparing something Bittman calls “Meatballs, a New Way,” which is a combination of ground beef with bulgur and spinach (this is in his “Dinner” section, so for after 6 pm). I bought all the ingredients, demanded total silence in the kitchen, and went to work. And they turned out — if I may say so — really well, served with rice and a salad with a tahini dressing. I was so excited to eat something I had made that the same weekend I made his ratatouille with chickpeas recipe. Again, a success, and I felt a real sense of pleasure when they house filled up with the smell of roasting eggplant, zucchini and peppers. As my wife noted, in the past I’d be sitting on the couch reading a book and drinking a bourbon when the aroma of cooking would hit my nose, and I had nothing to do with it — this time, it was all me.

I’d like to think Bittman’s book was incidental to this change — at least the part of me embarrassed for raving about its transformational potential. But the truth is that it really did flip a switch. I can’t walk into a supermarket these days without looking at food — all that processed junk! — differently. (God, I hope it doesn’t turn me into a sanctimonious jerk.) For the moment, though, I’m just grateful to have been enlightened in this way and to stop taking something so essential for granted.