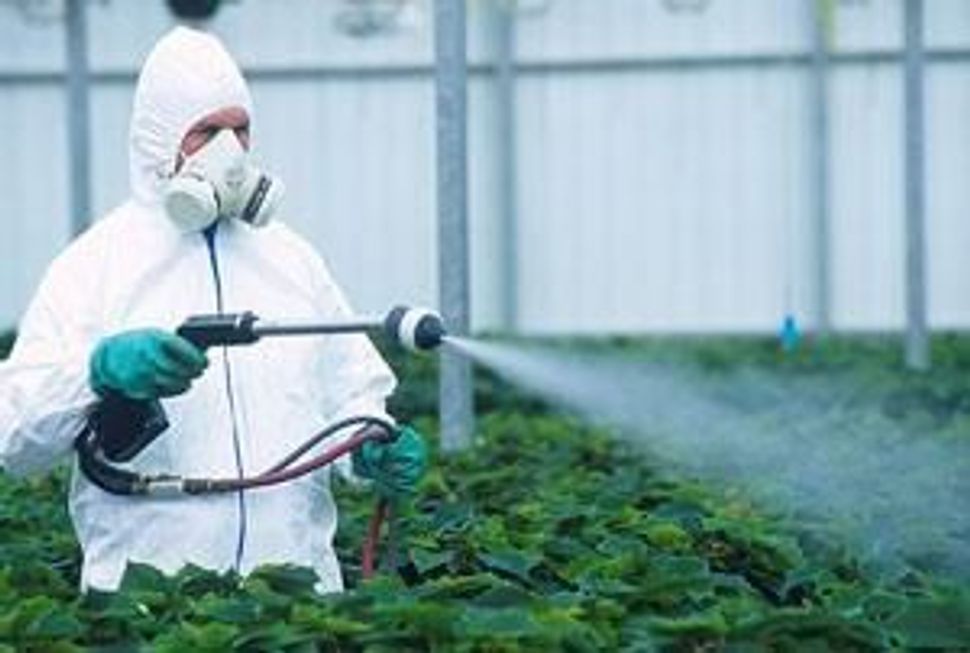 Image by Courtesy of amsvans.com

According to the Torah most insects are forbidden, even the teeny tiny ones that hide hang out in the hard to reach places of broccoli or brussel sprouts. There are many customs and practices of the most efficient ways to clean vegetables for insects, but as we’ve discovered ways to see things which the naked eye cannot see the customs of some are changing drastically. For example, there was the somewhat famous affair of discovering microscopic crustaceans in New York City’s public water supply. One can find videos of microscopic bugs on strawberries, and there are those who say to wash romaine lettuce in dish soap because of little sticky bugs. And one can also find bags of greens and veggies with kosher symbols.

Last year, Sephardic Chief Rabbi Ovadia Yosef was compelled to issue a statement advising people to wash vegetables by hand rather than consume “kosher” packaged vegetables which have been subjected to heavy pesticide use. There have also been concerns of etrogim for sukkot grown in Israel having excessive pesticides since they are not grown as food products. More than either of these reasons, pesticide use is something which affects Jewish communities because it affects literally every single human being on the planet.

While not unique to GMOs (Genetically Modified Organisms), herbicide and pesticide use is an essential component of growing GE (Genetically Engineered) food crops. One of the modifications in many crops is the ability to be resistant to specific herbicides or pesticides designed by the companies which patent the GMO strains, Monsanto’s Round-Up product (Glyphosate) being the most well known. When GMOs were first introduced, it was theorized that they would lead to lessened amounts of chemical herbicides and pesticides in conventional farming. It was estimated that in 2007, 200 million pounds of Glyphosate was applied in the United States the agricultural sector, industrial sector and by people at home. Rather than decrease, we have actually seen a rapid increase in pesticide use since GMOs were introduced into the marketplace.

Chemical herbicides and pesticides are understood to be dangerous and their use is heavily regulated by government agencies. Recently, Monsanto successfully lobbied to increase the current permitted level for Glyphosate. Synthetic chemicals are a part of our modern world, and doing away with them is certainly not easily done and may not be worth doing.

For example, if herbicides and pesticides protect food crops from destruction and therefore lead to higher yields so more people have access to more food, might the dangers and threats of their use be a tension worth contemplating? Coming from a place of Jewish law and ethics, we must weigh the purported threats and purported benefits of the use of chemical herbicides and pesticides.

It is certainly a Jewish virtue that the needy be supported and the hungry be fed. However, it is also a Jewish virtue to protect the earth and to be good stewards for environmental sustainability. While application of chemical herbicides and pesticides have been claimed to increase food production, they also come with a host of purported complications, such as cancers, behavioral disorders, unintended far-reaching pollution from drift and run-off, just to name a few. The question must be asked, are the potentially unfounded claims of increased food production more significant than the proven damaging ramifications of using chemical pesticides and herbicides? We also must ask the question, is there a place for moderate application of chemical herbicides and pesticides, and why do biotech corporations have an interest in increasing the regulated amounts of permissible pesticide and herbicide use? If it is to feed more people, we must take those efforts seriously; however if it is to financially gain from further sales and increased use then we must pause and weigh all of these factors.