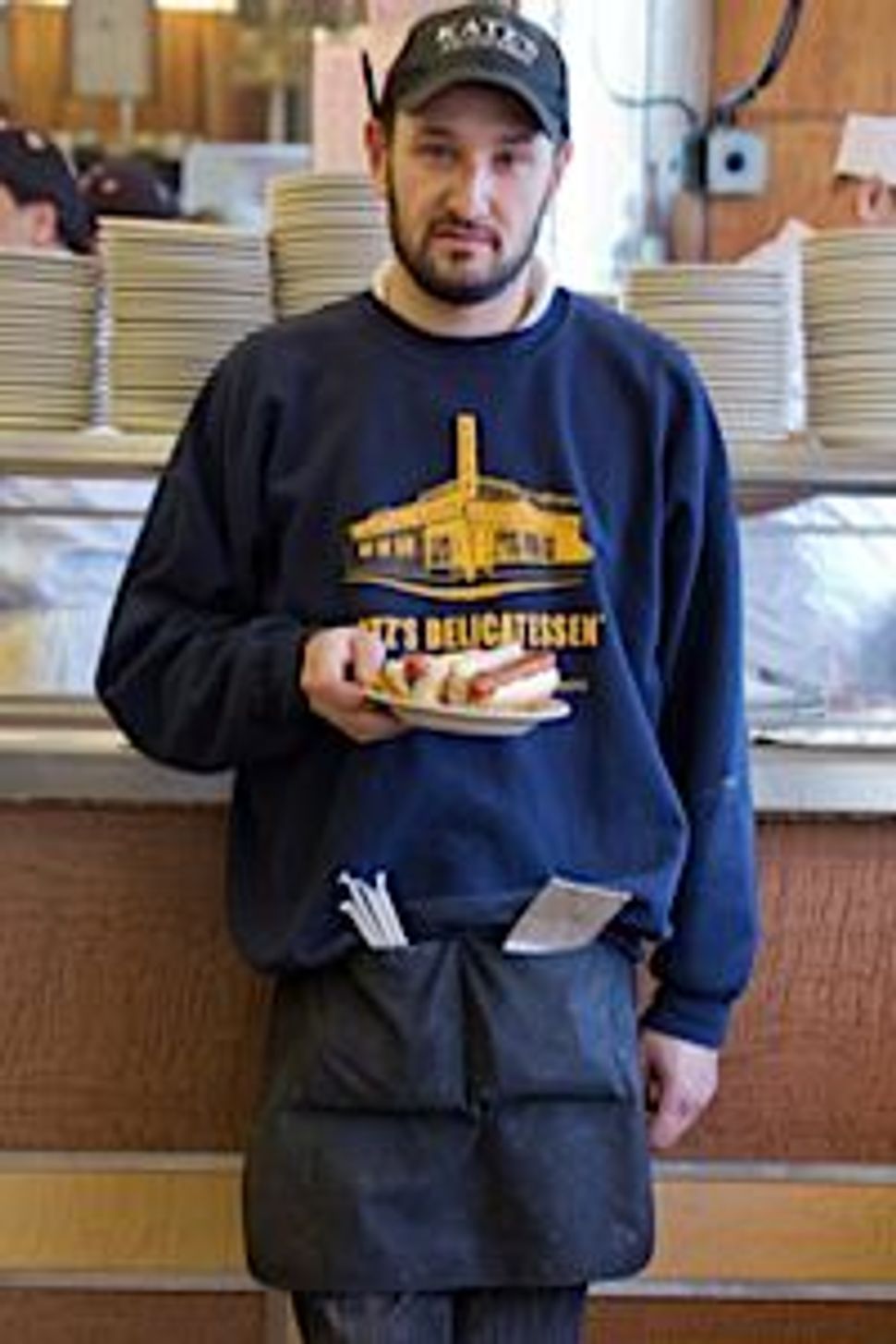 When David Manheim first started working at Katz’s Deli, he was a teenager promoting their delivery service and was paid in sandwiches. When he came back five years ago as a waiter, he knew he wouldn’t leave until he made something to showcase the soul of Katz’s, as he pegs it: “The Empire State Building of the Lower East Side.” This deli will celebrate its 125th year serving up some of the best pastrami in town on June 2nd, and it’s only fitting that it serves some old school Jewish humor with the slaw.

A Manhattan native, Manheim, 38, first got the attention of the food, and Jewish, world in late April when he launched his blog The Last Jewish Waiter with an accompanying hilarious video of the shenanigans behind the counter (where all the magic happens) and his often welcome abuse of Katz’s patrons. Deciding to film the deli, Manheim eschewed the reality show mold, which he feels is often fake and opted for a behind-the-scenes feel. “I’ve always been interested in shows that show the process and aren’t pretentious. That’s my vision for this, it should be just like The Muppet Show, a show about making a show yet shows the imperfections of a team.”

Growing up in Chelsea to parents who are both teachers, Manheim was on two different cable shows when he was younger and knew he was comfortable on camera. After a brief stint in Los Angeles, Manheim returned to New York and started waiting tables at Katz’s, which he hopes is only a stepping-stone to the next phase of his career. “I love talking to people and I love it when it’s good,” Manheim told the Forward. “I just have a problem with authority and I don’t particularly like to be told what to do, which is funny for a waiter.”

The Last Jewish Waiter has already garnered positive attention, and with eight planned episodes with special guests such as Sopranos’ Joe Gannascoli to be filmed over the summer Manheim hopes it will be picked up by a major network. He envisions the show as a dark “demented” comedic talk show on IFC — “It should be absurdist and real and dark and fun but with an overwhelming kindness at the bottom of the nastiness.” A show that would most certainly appeal to a nostalgic memory of a no-nonsense old New York and a time before political correctness was the status quo.

But our memory of old Jewish humor in New York is not the current reality any more. “Jews that are my age and younger are so much more successful than Jews of the past, and desperation makes funnier comedy,” Manheim said. Successful younger Jews are not as desperate to fit in anymore, and the “shtick has become so popular that they forget where it came from. The fact that I have to wait tables is so much funnier because I’m so miserable.”

According to Manheim, the next generation defining New York humor can be found in the Dominican New Yorkers who work behind the counter at Katz’s and make special appearances in his videos. “I love to get the guys at the store to be more involved, they’re hysterical. That’s old New York. Jews in New York aren’t old New York anymore. These Dominican guys are that.”

And what would he recommend off the menu? The pastrami, of course. But that’s not what Manheim indulges in anymore, his meat of choice these days is turkey. “The place is pastrami. If I have a bite of pastrami it turns to ash in my mouth. I can’t eat it anymore. It’s too present.” If you are lucky enough to sit in Manheim’s station you’ll notice that behind his surly, expletive-ridden exterior is a comedic breath of fresh air taking us back to the Katz’s of our grandparents and a New York that we can only find in a place like Katz’s.

“Any waiter that works at a restaurant 80 hours a week can’t love it all the time,” he said. “But when I get out of the job, it’ll be the best job I’ll ever have.”