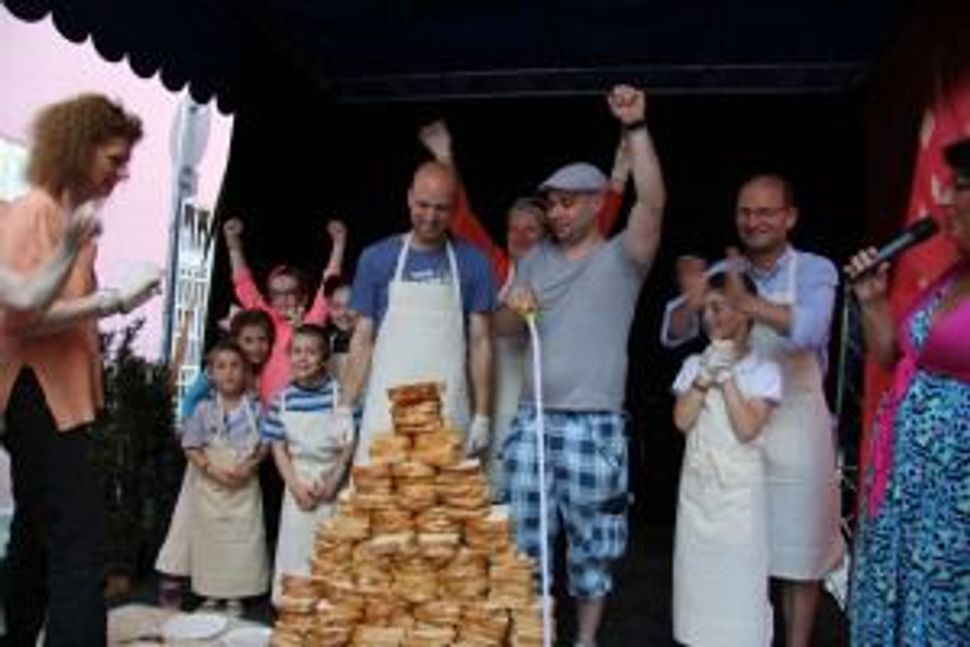 How do you make the world’s tallest kosher sandwich? The Jewish community in Budapest decided it was high time to find out.

When Andras Borgula started planning the Budapest’s sixth annual Judafest, a cultural street fair celebrating Jewish life in Hungary held June 9, he had an ambitious thought: Why not set some kind of Jewish record?

Borgula, 38, founder and director of the Jewish Golem Theatre and artistic director for the festival, said the idea came to him as he tried to come up with something that would be both Jewish — and Hungarian.

“There isn’t so much Hungarian Talmud or Torah,” he said. “But we’re pretty strong in the kitchen. We like to eat, and we like to cook. So, why not a kosher sandwich?”

Borgula’s dream was almost cut short when he found out that the Guiness World Records did not have a category for unusually tall kosher fare. After much pestering and pleading, the world’s arbiter of unusual and outrageous things agreed to create a special category, with the requirement that the oversized lunch be at least two meters (almost 7 feet) tall.

And so, as the 7,000 attendees of Judafest (put on by the Budapest chapter of the American Joint Distribution Committee) crowded into Kazinczy Street in Budapest’s Jewish Quarter this week, Borgula and 25 volunteers were preparing over 400 sandwiches, to be stacked one on top of each other as “one big club sandwich.”

Sadly, they fell just short of the world-record setting goal, running out of bread just as the sandwich reached 1.9 meters.

But, “even if we had more,” Borgula said, “the tower was start[ing] to fall apart.”

Despite the setback, Borgula, who positioned the individual slices of white bread, kosher turkey, hummus and pickles himself, is proud of his community’s achievement. “It’s not an official record, but still, this is an unofficial tallest kosher sandwich of the world, built by myself, and I’m not an engineer,” he said.

So, what to do with such a masterpiece? Borgula thought of that too. With record-level flooding threatening Budapest, volunteers were put to work to fortify the banks of the Danube. Rather than letting the hundreds of sandwiches go to waste, Borgula and other festival-dwellers carried them down to the river and served them to people working to fight the rising tide.

“I think most of the people never heard about Jews, and never tasted kosher [food] in their entire life,” Borgula said. “They were pretty amazed by this.”