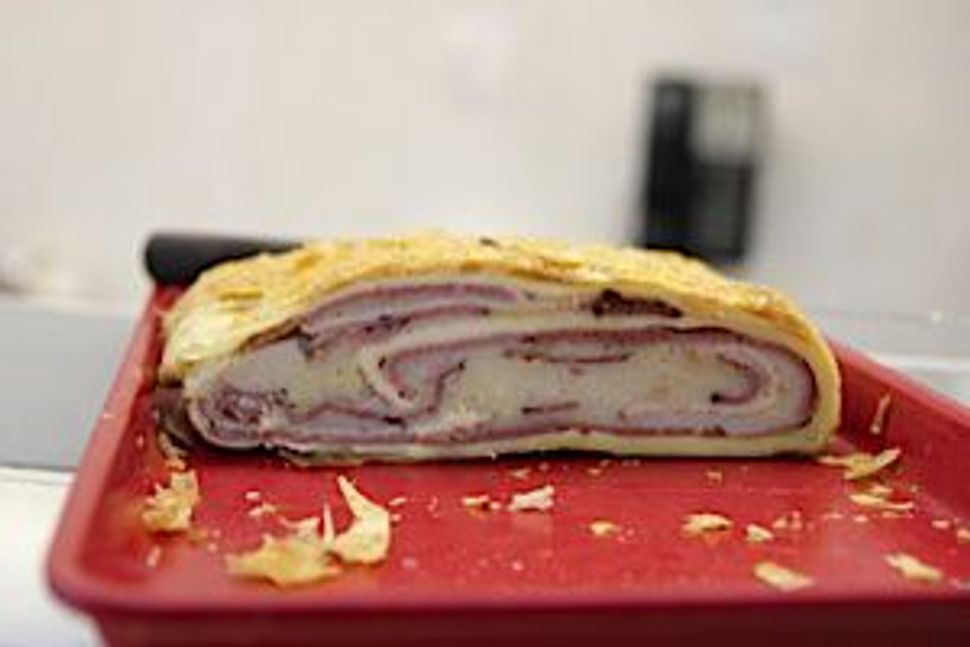 Deli Roll: House of Glatt packs kosher salami and potatoes into a delicious strudel. Image by All photos by Lauren Rothman

If you’re on the hunt for a taste of the shtetl in New York City, there’s no place better than the Brooklyn neighborhood of Crown Heights. Home of the Lubavitch community, the neighborhood streets are lined with signs in Hebrew letters, hat makers, wig shops, and displays of silver Kiddush cups, candlesticks, and challah covers in store windows. If you stroll through the neighborhood, you just might catch a whiff of freshly fried schnitzel or the aroma of baking strudel wafting in the air.

Located in the heart of the neighborhood, Kingston Avenue has excellent places to nosh, from great supermarkets, to small prepared-foods shops, to mouthwatering Jewish bakeries. I recently spent an afternoon eating along the avenue; click through the slideshow below for a guide to some of the street’s best offerings.

If you pass by Gombo’s Heimishe Bakery after 3 p.m., you’ll likely see a cluster of schoolchildren in front of the kosher bakery’s large glass windows, ogling the display of donuts, cookies and cakes. As the Yiddish “heimishe,” or home-style, indicates, the sweet treats found inside Gombo’s are rustic, yet satisfying: the bakery makes a buttery, flaky almond horn; several varieties of crisp, many-layered rugelach; and a moist, intensely fudgy chocolate babka that’s cut to order.

If you didn’t know about the House of Glatt, you might be inclined to walk right by it, as I did for many months before a friend and fellow Crown Heights resident recommended it to me. “Their baba ghanoush is fantastic,” he told me, and I was instantly curious. The shop is a prepared-foods emporium, packing its tiny storefront to the brim with goodies like super-crisp schnitzel, six varieties of kugel, fragrant roast chickens and savory strudels, such as one filled with a pinwheel of mashed potatoes and bright-red pastrami slices. Fresh salads dominate the refrigerator case, like that legendary baba ghanoush, as well as (of course) smooth hummus, chopped eggplant, sliced beets, and Russian salad. The store also offers a selection of kosher meats.

If snacks at Gombo’s and House of Glatt whet your appetite, then Empire Kosher is where you can really fill up. A megastore of a kosher supermarket, Empire is located on Empire Boulevard between Kingston and Brooklyn Avenues, and boasts all of the ingredients you’ll need to do some serious home cooking. It has a vast selection of kosher cheeses and yogurts; an entire refrigerated wall of prepared salads from brands like Sabra, a large, varied array of bottled beers and its own in-house bakery, that turns out fresh Israeli-style pita and large challahs daily. Surprisingly for a kosher supermarket, Empire sells a host of international ingredients, like bok choy in the produce aisle, mirin and wasabi in the condiment aisle, the store also has a sushi bar. But if it’s Israeli vittles you’re after, never fear: you’ll find an impressive selection of classic snacks, including Bissli and, Bamba: “We’d have to close our doors if we didn’t sell Bamba,” manager Chaim laughed as he led us to the well-stocked chips aisle.