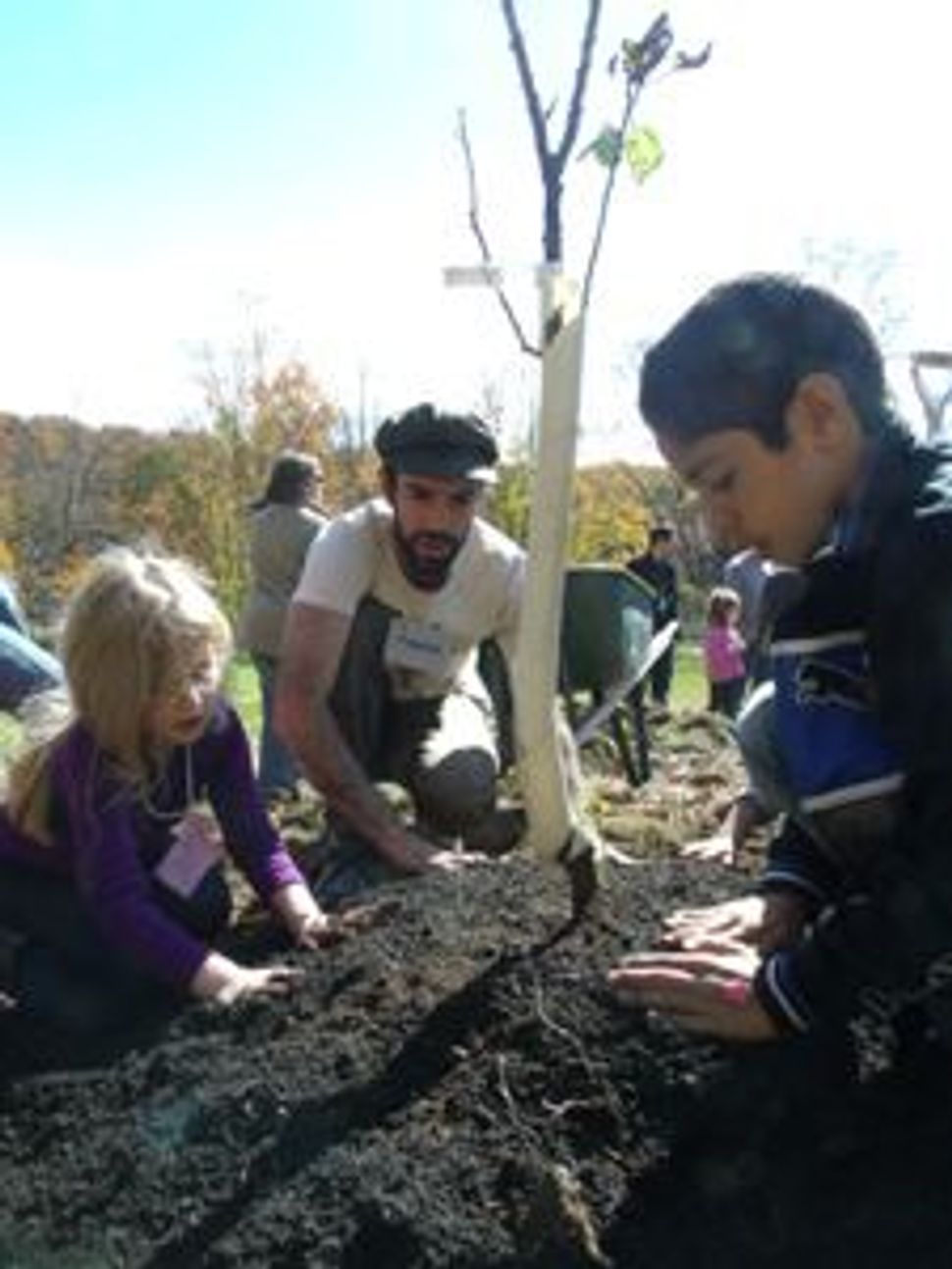 Image by courtesy of: Cassie Pena

Picture this scene: city-dwelling children running with wild abandonment under a canopy of fertile fruit trees in a Jewish orchard, each tree emblazoned with a blessing bestowed on it by a community of orchard care-takers. Standing outdoors, not a car horn to be heard, a child grabs a pear from a tree, like taking candy from nature’s vending machine. Peaceful, right?

With this image as inspiration, one year ago, Yoni Stadlin and Jonah Adels, of Eden Village Camp and Jewish Farm School respectively, applied for a mini grant through Hazon’s New York Bike Ride. Their dream was to build a Jewish orchard of 100 trees, able to provide local, carbon neutral organic fruit for community events on the Farm at Eden Village and to bring into being a permaculture laboratory and fruit forest that will one day be the scene of a lot of happy and satiated children.

They called this the “Pardes Brachot Community Orchard” and put together a team of Jewish farmers to plan and bring this orchard to life. I rode for the Jewish Farm School in the Hazon New York Bike Ride in 2012 to support this orchard, and approaching this year’s ride, I wondered, “What does this Jewish orchard look like today?” I checked in with Farm Director Sarah Brown to find out.

Sarah explained that the the farm staff at Eden Village Camp, along with orchardist Steve Knapp, began laying out the overall design of the Pardes Brachot Community Orchard back in August of 2012, almost from the moment the idea was conceived. After some initial orchard prep with the Eden Village Farm Apprentices, and with the help of a second grant from UJA-Federation of New York’s Jewish Social Action Month initiative, Eden Village Camp and Jewish Farm School were able to host community planting days in October of 2012. Over the course of these two events 20 pear, plum and apricot trees were planted, each blessed with a Shehechiyanu, a blessing recited on new things.

This sounded like a great start, but I wondered, aside from planting these trees with a blessing, what makes an orchard Jewish? Naturally, Sarah had an answer: “In building this orchard, we are integrating the practice of Orlah and Peah. From Leviticus, Orlah is the prohibition of eating fruit from a tree within it’s first three years of life. In the fourth year we were commanded to offer the fruit to G-d, and in the fifth year the fruit can finally be consumed for personal use.”

“Our fruit trees were already several years old when they were planted. Next year, in their 5th year of life, we will donate the fruit to the Fishkill Food Pantry, a combination of Orlah and Peah, the practice of leaving the corners of our fields for those who lack access to food.”

“The community events for planting have been awesome. Groups have come together across different Jewish denominations, Orthodox to Reform, children to the elderly, and everything in between, all out in the orchard planting trees and learning about the arboreal traditions in Jewish law. In 2013, through community supported plantings, we have been able to put 19 more trees in the ground.”

This was great to hear because one of the intentions of the Pardes Brachot Community Orchard is to enhance Jewish community by being a macro representation of the polyculture and interrelating species that are necessary for a thriving fruit orchard, and in turn, a thriving Jewish community.

After speaking with Sarah, it was easy to see that the orchard might thrive and be a teaching space for children attending Eden Village Camp and seekers coming to grow environmentally and Jewishly through their experiences on the Farm and Orchard at Eden Village. Nonetheless, in the next two years, Sarah hopes to see more growth, particularly in the arena of support and blessings. Maintaining an orchard of this size takes a lot of work, and the farm staff will need to grow to properly tend to the trees. Considerable funds for the project still need to be raised to see the orchard brought to its intended 100 trees.

As for “each tree emblazoned with a blessing bestowed on it by a community of orchard care-takers,” Eden Village Camp has inaugurated a tree sponsorship program, where for a donation, individuals can memorialize a blessing for a tree of their choice, or sponsor monetarily the planting of a tree. On September 29, 2013, Eden Village Camp and Jewish Farm School have scheduled another community orchard planting. At that point they may be close to the hoped for 100 trees, but the needs of this growing orchard will continue for years to come and hopefully, we as a Jewish community, will grow together to build a fertile space for our children’s future.